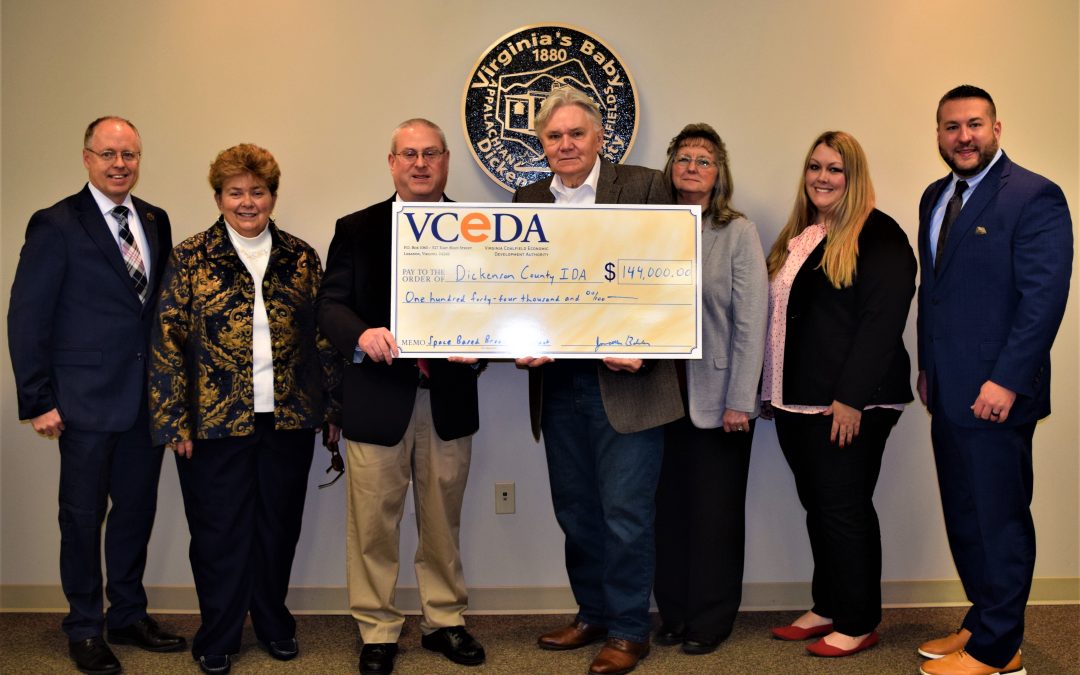 The project will bring access to high-speed Internet to an additional 60 households, to include 97 school-aged children. Potential benefits of the project include enhanced educational opportunities for students, health treatment expansion and enhanced workforce education and remote worker opportunities.

“The grant will be used to take care of the expenses of hardware, wiring and two-year subscriptions for each household served, according to the Dickenson County Industrial Development Authority application,” said VCEDA Executive Director/General Counsel Jonathan Belcher. “In the end, the grant serves to expand education and telehealth access in Dickenson County.”

The Dickenson County Board of Supervisors has approved a county match of $96,000 toward the overall $240,000 cost of providing access for the 60 accounts. Upon the conclusion of the two-year subscription being provided through the VCEDA grant and the county match, individual account holders will be responsible for ongoing service, unless other support mechanisms are found, the application noted.

“The Dickenson County Industrial Development Authority is pleased to be a part of the process to provide additional access to high-speed Internet to citizens of Dickenson County,” said Dana Cronkhite, executive director of the Dickenson County IDA . “We share the sentiment of the board of supervisors that access to high-speed Internet is crucial to the future success and economic development of our community. We are thankful for programs such as the VCEDA Education and Telehealth Access Fund that focus on ensuring our students have the access needed to be successful in their educational programs.”

The VCEDA board adopted formal policies for the administration of the funds being received from the state in 2021 when it formed the VCEDA Education and Telehealth Access Fund.  In FY2022, an application from the Appalachian Council for Innovation (ACI) was approved by the VCEDA Board for a project to provide low earth orbit Starlink satellite internet service to unserved and/or underserved children in the VCEDA footprint.  This project was done by ACI in association with various local school districts, resulting in a grand total of 724 children being provided access to Starlink, including connections made possible by leveraged funding from the participating localities of Dickenson, Russell, Tazewell and Wise Counties, according to the most recent report from ACI.

Discussions concerning the funding being received by VCEDA in FY2023 resulted in several of the county industrial development authorities expressing a desire to apply for the funds for Starlink projects in their respective jurisdictions. At the September 15, 2022 VCEDA board meeting, the VCEDA Board approved an application from the Wise County IDA for up to $232,500 in FY2023 Education and Telehealth Access funds, in order to provide Starlink service to an additional 94 residences in Wise County.

The Dickenson County IDA submitted an application for up to $144,000 in FY2023 Education and Telehealth Access funds. In its application, the Dickenson County IDA noted the county has identified 290 households and 323 students who either do not have Internet access, or who do not have Internet access capable of supporting streaming for online learning.

“I am thankful that Starlink has been available for our county,” said Dickenson County Board of Supervisors 2022 Chairwoman Peggy Kiser. “I have supported them in their effort to provide Internet for the underserved in our county. Hopefully, they will be available to help more homes and families in our community.”

Dickenson County Board of Supervisors 2022 Vice Chairman/Willis District Supervisor Josh Evans noted that since his campaign for office and even before his term of office began in 2020, access to high speed Internet has been one of his priorities.

“Bluntly speaking, lack of high speed Internet access has been and continues to be an obstacle to growth and service for Dickenson County,” Evans said. “However, our board and administration has shown fortitude and commitment to obtaining high speed Internet service to our homes and families.  This announcement represents a huge step forward in this commitment. Sixty families with school-age children have already been identified and will be connected in early 2023. I can’t thank our board and county administrator Larry Barton enough for sharing our vision for this.  I also want to specifically thank Jack Kennedy for his help and support. His guidance through this in connecting our families has been a tremendous asset to us.”