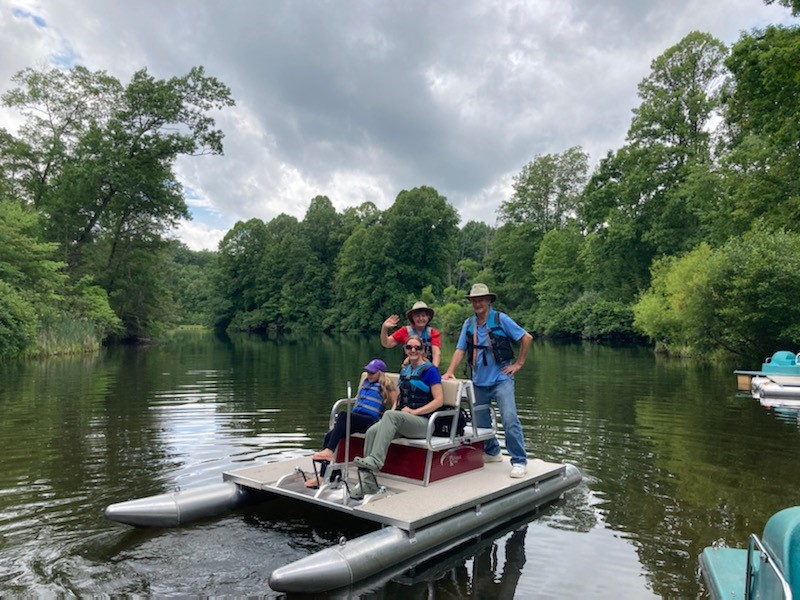 New paddleboats which have been enjoyed by Breaks Parks guests this summer were among the park purchases and improvements made through a recent VCEDA loan to the park funded through the Civil Penalties Fund earmarked specifically for park use.

BREAKS, VA — AUGUST 28, 2020 — Documents related to a loan from the Virginia Coalfield Economic Development Authority (VCEDA) to the Breaks Interstate Park were signed recently and included an amendment to allow spending on other needed park items.

In April, VCEDA approved an up to $150,000 loan to the park to assist with operating costs as a result of COVID-19 shut-downs mandated by the state of Virginia’s response to the pandemic which impacted the park. In June, an amendment to that loan was approved by the VCEDA board to allow the park to also use some of the funds for a project adding new paddleboats and expanding the dock area, per the park’s request.

The amended loan allows for the funds to be used for operating costs, as well as “the purchase of equipment, dock area expansion or other improvements,” giving the park flexibility to also use the funds for the paddleboat and dock projects or other projects that might arise. Funds for the loan come from the Civil Penalties Fund earmarked specifically for the park.

“COVID-19 created some rather unique challenges for a number of VCEDA region businesses, including the Breaks Interstate Park,” said VCEDA Executive Director/General Counsel Jonathan Belcher. “In an attempt to help businesses in our region navigate through some of those challenges, early on, we provided funding to our local industrial development authorities which they in turn passed on to businesses in their localities to aid them in the pandemic. The Breaks Interstate Park, which made a direct application to VCEDA for pandemic assistance, is a key attraction in our region and as such, we were pleased to approve the initial loan and later to approve the amendment requested t

o give the park the flexibility it needed to put the funds awarded to it to the best use.”

“In an effort to balance health department guidance and the safety of our employees/guests with the need to produce revenue for the park during the pandemic, we reopened many of our facilities, but also left several of them closed due to the inability to ensure any form of social distancing,” Bradley said.. ”As such, the activities which remained open began experiencing unprecedented levels of business. One such example was the paddle boats and the boat dock. The watercraft VCEDA previously helped us purchase through another grant met some of that new demand, but adding paddleboats to capitalize on the overall increased demand was identified as another area that would benefit the park now and in the years to come.”

Additionally, Bradley said the expansion in the dock area to make room for the new watercraft has also provided more room for larger crowds in that area.