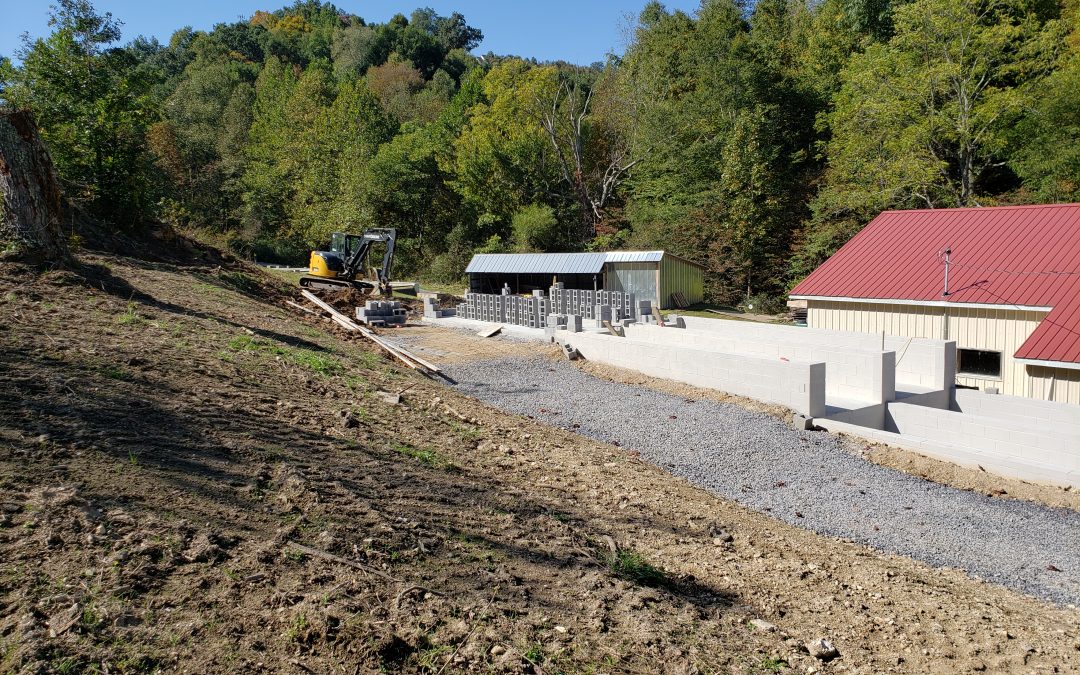 Construction at the new Riverbound Trout Farms LLC site is underway utilizing funds in part provided by VCEDA. Once complete, fish production by Riverbound will have been doubled. The plant initially plans to process 3,000 to 4,000 pounds of fish per day.

LEBANON, VA – JANUARY 25, 2021 — While fishing and fish farming have been ongoing in the region for years, an up to a $500,000 loan from the Virginia Coalfield Economic Development Authority (VCEDA) will be assisting in the expansion of Riverbound Trout Farms, LLC as they move forward with plans to construct and operate a new fish processing facility in Russell County, Va.

In addition to the construction and operation of a new fish processing facility, a workforce development and educational component is also part of the overall project, Musick said, noting he has already been involved in discussions with Southwest Virginia Community College (SWCC) about the new facility being used as a teaching tool for students enrolled in SWCC’s science and agriculture programs. Future plans include the construction on site of an educational center to offer classes in aquaculture and seminars and non-credit courses in fish farm development and operation. Also included will be a laboratory.

“VCEDA is pleased to be assisting in the expansion and growth of Riverbound Trout Farms, LLC,” said VCEDA Executive Director/General Counsel Jonathan Belcher. “This project is a prime example of a value-added approach to growing existing industry since Riverbound already operates a fish growing business in the area. By adding a processing facility, which is what the VCEDA loan will be used toward, the business will be adding processing jobs and potentially other jobs for others in the region who choose to get into the fish farming business.”

The Russell County Industrial Development Authority (IDA) was instrumental in the expansion project. The VCEDA loan was made to the IDA which will in turn lease purchase the property to Riverbound. Funding is from VCEDA’s Coalfield Revolving Loan Fund which is funded through coal tax credit funds. The Virginia Department of Agriculture and Consumer Services also assisted on the project.

“We are excited about the expansion of this company and the additional opportunities that will be available to our community,” said Russell County IDA Chairman Ernie McFaddin. “The addition of this processing facility will greatly increase the amount of trout that will be grown throughout our region. This is one more step in continuing the growth of aquaculture in our region.”

Aquaculture was identified in VCEDA’s regional agricultural strategic plan several years ago and the region has begun to see good results from that and other agriculture-related initiatives, Belcher noted.

The Riverbound project is the second aquaculture facility to be announced in the last three months in the region. Pure Salmon, which was referenced as Project Jonah in the region in the past, was announced in November. VCEDA also approved funding for that project.

“Helping the agriculture and aquaculture industry become more developed in the region is one of the goals of this project,” Musick said of the Riverbound processing facility. “We hope to encourage additional farmers in the area to get into the business of growing fish; farmers who would then bring their fish to us for processing.”

The VCEDA funds are being used to finance the purchase of a 35-acre tract of property, construction of a new building for the processing plant project and needed equipment.

“We already operate a commercial fishery in Russell County where we grow trout,” Musick said. “This funding will allow us to expand to also process the fish at the new location near Southwest Virginia Community College.”

Previously, trout processing in Virginia has been limited to one processing facility located in Monterey, Va., in Highland County. Trout is the fish most commonly grown by Virginia producers, however, most domestic trout production is found in western states including Idaho, Washington and California.

What that means, Musick added, is that Riverbound will need to purchase fish in addition to the fish it grows.

He added Riverbound will work with area farmers interested in growing fish to evaluate their water supply and other geographical considerations to give them an idea of the cost of constructing and operating a fish farming facility at their individual locations.

“We already have some folks in the area interested in that,” Musick added. “With the number of resources: farm ponds, small lakes and cold water stream supplies, there are many opportunities for trout farming in this region.”