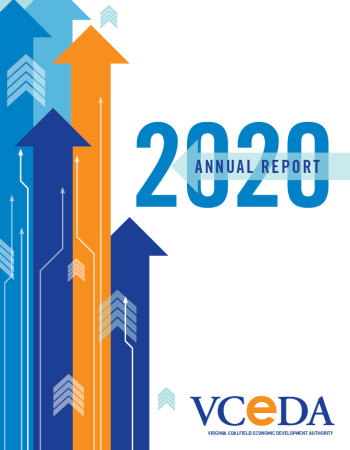 LEBANON, VA – MARCH 2, 2021 — Despite the challenges to economic development presented during the national COVID-19 pandemic, the Virginia Coalfield Economic Development Authority (VCEDA) experienced a successful year, with projects reported by the authority in 2020 projected to create or retain 1,259 full-time jobs and 227 part-time jobs and to generate $237 million in private investment.

The results of the past year are highlighted in the VCEDA 2020 Annual Report filed with the state Monday and detail 32 new projects projected to create 505 full-time jobs and 97 part-time jobs generating more than $235 million in private investment, as well as successes in job expansion and retention projects which also impacted the region in a positive manner.

VCEDA serves the seven-county, one-city coalfield area, including the counties of Buchanan, Dickenson, Russell, Tazewell, Lee, Scott, Wise and the City of Norton. Projects were approved for funding in 2020 in every county and city served by VCEDA and included those in the information technology, agriculture and manufacturing sectors. Industrial site development, broadband expansion and workforce development and training projects were also approved during the year.

“VCEDA has been marketing the region to industries including data centers, information technology and manufacturing for more than two decades,” said VCEDA Executive Director/General Counsel Jonathan Belcher. “This is reflected in our Southwest Virginia’s e-Region marketing strategy, which was implemented more than 14 years ago and has seen the location of various data centers, IT operations and manufacturing operations in the region.”

A new renewable energy fund was also created in 2020 with the allocation of $1 million from Coalfield Employment Enhancement Tax Credit funds for the fund which is designed to attract renewable energy jobs and investment to the region. Already, VCEDA has been receiving inquiries about the fund and has established a twice yearly application period. The first pre-applications are due in June 2021.

In addition to the new projects recorded, seven expansion/retention projects projected to create and/or retain 754 full-time jobs and 130 part-time jobs are also detailed in the annual report. The expansion/retention projects are projected to resulted in an additional $1.55 million in private investment and include more than 600 full-time and part-time jobs retained through COVID-19 relief funding provided by VCEDA.

Included in funding approved by the VCEDA board in 2020 were seed capital matching grants for 27 new small business startups in the region projecting the creation of nearly 170 full-time and part-time jobs and more than $1.4 million in private investment.

Funding was also approved by VCEDA in 2020 for several pending new projects announced or expected to be announced in 2021, including Rambler Wood Products (73 new jobs) and Riverbound Trout Farms (17 new jobs), both of which were announced in January 2021.

During the year, VCEDA approved 16 loans totaling $6.8 million; and 37 grants totaling $3.76 million, for a combined total of 53 loans and grants and more than $10.5 million in new funding.

Despite the impact COVID-19 had on VCEDA’s marketing efforts in 2020, VCEDA continued marketing to site consultants and targeted industries and attended several trade shows and conferences in person early in the year and exhibited and attended others virtually. In 2020 VCEDA had 28 in-person and virtual prospect visits and handled 165 inquiries about Southwest Virginia’s e-Region.

An overhaul and a new address for the VCEDA website—www.vceda.us – were completed and additions to the website included a chat feature and an interactive regional map showing airports, industrial properties, major employers, workforce development centers, higher education institutions and hospitals. New regional videos, including “Find Your Place in Southwest Virginia’s e-Region” and other video clips featuring business leaders describing living and working in the region were also projects completed during the year.

Also in 2020, VCEDA began providing staff support for the new Virginia Coalfields Expressway Authority and helped that new authority become operational in 2020 as the final members to it were appointed by the state.

“Despite a very challenging year due to the pandemic, VCEDA and the region were able to make positive progress,” Belcher said. “We are optimistic 2021 will bring more successes for the region; and in fact, we are already seeing the results of that.”

J.P. Richardson, who served as the VCEDA board chairman in 2020, added, “VCEDA remains committed to its mission of helping to enhance and diversify the economy of the coalfield region of Virginia. We look forward to working with the governor’s office and the General Assembly to help our region continue to diversify and grow.”

A full copy of the annual report may be found on the VCEDA website at www.vceda.us/publications/.