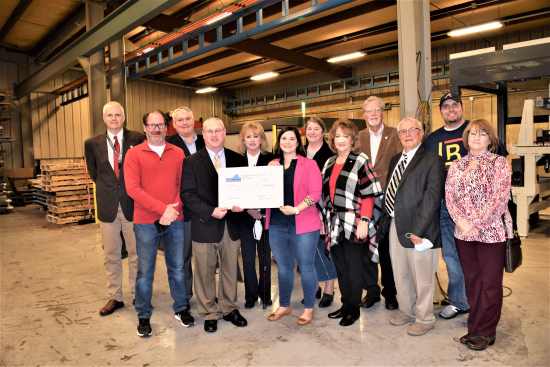 The company will invest $3.2 million to expand its operations, upgrading and modernizing machinery and equipment to increase capacity and double production at its facility.  The Virginia Coalfield Economic Development Authority (VCEDA) provided a $400,000 loan to help purchase equipment for the expansion.  At the time of application to VCEDA, Lawrence Brothers, Inc. employed 70. The new expansion will see the company’s employment numbers grow to 110 within five years.

“The Virginia Coalfield Economic Development Authority was pleased to provide a $400,000 loan to Lawrence Brothers, Inc. to assist with the purchase of equipment for this expansion project,” said VCEDA Executive Director/General Counsel Jonathan Belcher.  “This is the second time VCEDA has assisted the company with expansions in the last two years. Lawrence Brothers’ ability to diversify and grow their business is a true testament to the strength of its owners, employees and the favorable business environment found in our region.”

Virginia Delegate Will Morefield noted, “this announcement is encouraging news, confirming that Southwest Virginia is making significant progress in efforts to diversify the economy. I commend Lawrence Brothers for making the commitment to expand and all of the economic development organizations for making this possible. The Virginia Coalfield Economic Development Authority (VCEDA) and the Virginia Economic Development Partnership (VEDP) are without question some of Virginia’s most effective and proven economic development organizations.”

Sen. Travis Hackworth noted the longevity of Lawrence Brothers, Inc., in the region and the impact of its continued growth.

“I am pleased to have Lawrence Brothers Incorporated (LBI), a third- generation family-owned and operated business located in Tazewell County since 1974,” Hackworth said. “Since 2017, they have expanded twice and will create a total of 40 more new jobs once the second expansion is completed. I believe we need to support and promote local businesses such as Lawrence Brothers.  In my opinion, economic development starts right here at home.”

Founded in 1974 by brothers Jim and Dale Lawrence in Bluefield, Virginia, Lawrence Brothers, Inc. got its start in the welding business in 1974 in a three-car garage in Springville. There, they built mine battery trays for Exide Battery, today known as EnerSys, and added additional battery customers as the company grew.

Melanie Protti-Lawrence, granddaughter of one of the founders, and her husband, Fernando Protti, joined the company in 2006. They now each own 50 percent of the company, with Melanie serving as president and Fernando as chief executive officer.  They worked alongside Melanie’s father, Mark Lawrence, for 13 years, learning the business and leading the charge toward strategic diversification. Lawrence Brothers grew remarkably at the helm of Mark Lawrence, who dedicated his life’s work to the business, owning and operating it for 25 years.

“When my grandfather started this business, he did so to meet a need within the coal mining industry,” Protti-Lawrence said. “He always stayed true to his core value of putting in an honest day’s work. The Appalachian roots to coal run deep in my family and Virginia has allowed us the opportunity to continue to pursue the dream of a family legacy.

“At Lawrence Brothers,” Protti-Lawrence continued, “we pride ourselves in providing meaningful career opportunities with a comprehensive and competitive benefits package that not only draws from the best and brightest of the regional workforce, but also allows us to retain that talent through equitable, inclusive and empowering management practices.”

When asked about the future for Lawrence Brothers, Protti-Lawrence shared the company has strategic plans to continue to grow the company and bring highly skilled, high-wage employment to the region.

“We hope to continue to collaborate with regional partners, such as VCEDA, Cumberland Plateau PDC, among many others, in order to further enhance our career pathway development, on-the-job skills training and thereby retain the talent and resilience that embodies the SWVA workforce,” Protti-Lawrence said. “As a partner with other manufacturers regionally and statewide, Lawrence Brothers is resolute in our expectation to work alongside other bold visionaries and business leaders to help propel our region toward independence, self-sustainability and prosperity. We believe that the resources provided by the local, regional and state partners are absolutely essential in achieving the greatest potential for Central Appalachia as a whole: and that is an idealistic goal that I will support without hesitation.”

In addition to supporting the location of new business in the community, the Tazewell County Industrial Development Authority also works to assist existing business in their expansion needs.

“The Cumberland Plateau Board was glad to be able to approve a $250,000 loan to Lawrence Brothers to help them diversify their business, thus creating 40 new jobs,” Baldwin said. “Because of relaxed Revolving Loan Fund options approved by the U.S. Economic Development Administration because of the pandemic, we were able to provide more favorable terms to this local industry to strengthen their long-term commitment to the region.”

Further information on Lawrence Brothers, Inc. may be found at the company’s website at www.lbimanufacturing.com.