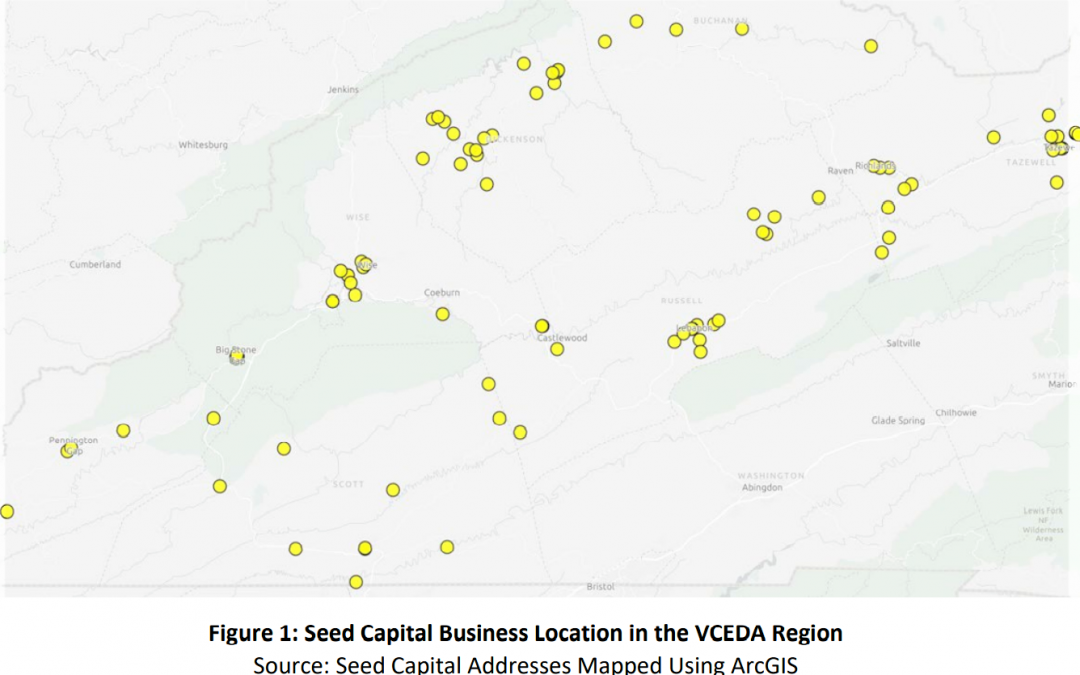 LEBANON, VA – APRIL 19, 2021 — The Virginia Coalfield Economic Development Authority’s (VCEDA) Seed Capital Matching Fund program has had a very high return on investment and has created and retained 300 jobs in the three years the program has existed, according to a study of the program recently completed by Virginia Tech’s Center for Economic & Community Engagement.

In its short time of operation, the VCEDA program has been recognized for its importance in diversifying the region and enhancing community assets from stakeholders and business entities. According to the VT analysis of the program, VCEDA’s investment of $1 million has resulted in a $34.2 million impact on the region’s economy in the course of three years.

“This study illustrated the importance of VCEDA as a regional resource and partner to businesses, organizations and communities of the region,” said Ashley Posthumus, economic development specialist with the VT Center for Economic & Community Engagement. “It was a joy to learn, firsthand from business owners and community members, about the significant benefits and successes of the Seed Capital Matching Grant Fund.”

The study noted that data shows for every year the program has existed, job numbers have exponentially grown by 10-20 positions. Since the program started, the study found VCEDA has played a critical role in the development of small businesses and in support of entrepreneurship.

“We asked Virginia Tech to take a look at our seed capital program to help us evaluate its effectiveness and what they found was that the program — which is designed to give entrepreneurs a head start in developing their business ideas into viable entities creating jobs in our region — has been effective in doing both,” said VCEDA Executive Director/General Counsel Jonathan Belcher.

In addition to the 221.5 direct jobs VCEDA’s seed capital program investments have created and retained in southwest Virginia:

As that money circulates within the region’s economy through business and employee spending, the study found additional money and jobs are created (indirect and induced effects), generating an additional economic impact of $9.7 million, an equivalent of 78.6 full-time jobs and $2.6 million in employee compensation.

The study suggested that in the future, these values have an opportunity to grow when newly awarded and semi-developed businesses are established in the region and the current COVID-19 pandemic influences cease to exist.

“We can infer that the program will continue to become a prized resource for the community and illustrate how to foster successful small business ecosystems,” the VT study noted, adding that VCEDA’s innovative thinking has led to more diversified developments, especially since its establishment of the Seed Capital program. “The diverse business landscape plays a role in stabilizing the economy as employment numbers change within the region.”

The study examined the quantitative impacts of the program using secondary sourced, VCEDA investment documents, interviews of seed capital recipients, and business surveys in determining its findings. The results reflect the impacts of 81 Seed Capital-supported small businesses since 2017 (including the influence of the global 2020 pandemic) and exclude 16 newly awarded businesses that have yet to fully develop their economic footprint.

The study found the impact of the Seed Capital program on the entrepreneurial ecosystem of southwest Virginia has been significant in a number of ways:

In addition to these specific effects on the region, the study found the VCEDA Seed Capital Program has helped foster a more entrepreneur-friendly climate and encourage start-ups. Research suggests that regions with a higher level of entrepreneurship capital show higher levels of output and productivity, than those without, the study noted.

It also found that through unique offerings of new goods and services, entrepreneurs help diversify area economies, enabling new markets to be developed, resulting in increased employment and the creation of new wealth. The stimulation of related businesses or sectors supporting the new venture adds to further economic diversification and development.

The report noted study results could be skewed by the impact of the pandemic. Additionally, it was noted a portion of businesses included in this study and approved in 2019 and 2020 are continuing to establish themselves in the region. Therefore, the study found additional economic impacts may be expected in the future.

The study concluded by recommending ways to improve and expand the seed capital program, to include business training workshops or courses at local community colleges or similar business institutes; a coaching or mentoring program including referrals to successful former applicants; additional marketing materials and guides on the program; fostering networking and sharing among cohorts of new or recent seed grant recipients, such as monthly or quarterly meetings to share trials and successes; and development of a small business program to offer targeted assistance to high growth potential small businesses.