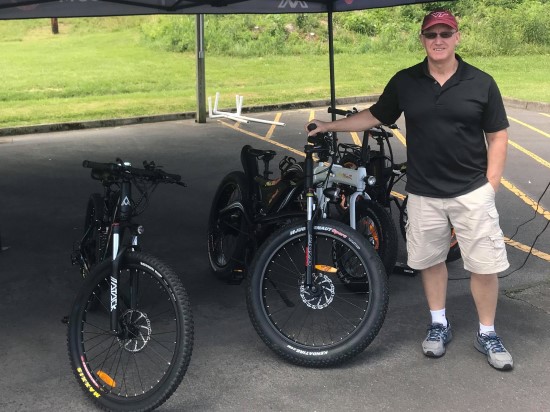 Wyatt Carter’s Adventure E-bikes, Inc. was a recent recipient of a VCEDA seed capital matching grant. In addition to selling e-bikes, the new business also plans to offer e-bike orientation classes which will include a guided ride in the Russell County area.

LEBANON, VA – JUNE 11, 2021 — With the increased focus on the outdoors and tourism opportunities in Southwest Virginia, Wyatt Carter, of Lebanon, decided the time was right to open a new business. Turning his focus to electric bikes, or “e-bikes,” Carter opened Adventure E-bikes, Inc. in Russell County.

Initially, Carter planned to offer the bikes for rental, but COVID-19 changed his business model, he said, adding he is focused now more on e-bike sales and soon, will offer an e-bike orientation school of sorts on the weekends where he envisions signing up riders, teaching them about the bikes and how they operate and ultimately, taking them on a short guided tour in the area.

“Adventure E-bikes, Inc. projects one full time and two part-time employees,” said VCEDA Executive Director/General Counsel Jonathan Belcher. “When COVID-19 came along, it put many small businesses in the position of having to figure out how to respond and many came up with different business models to make things work. We are pleased Adventure E-bikes Inc. found a market niche to pursue.”

Carter said he currently has six bikes in stock and would like to add four more so that he can offer a variety of option for e-bike riders.

“Not all cycling needs are the same,” Carter said, noting there are bikes intended for the novice rider, as well as those for more aggressive, experienced riders.

He recently shared information about three classes of e-bikes — some of which can reach speeds of as much as 28 mph — on his business Facebook page. He noted some e-bikes, including standard Class 1 e-bikes, require the rider to pedal to engage the motor and others have an additional hand throttle making their operation similar to a motorbike to engage the motor. New laws in the United States, he added, allow all three classes of e-bikes to ride on cycling trails in national parks, as long as they are pedaled like standard Class 1 e-bikes while on national park trails.

Carter noted he hopes by the end of the month to be offering an e-bike orientation school on the weekends to give riders an opportunity to have a hands-on experience with the bikes and how they work. He said he will likely launch in the Russell County Farmer’s Market area and once riders are comfortable, lead them on a guided ride to Easterly Park. He did some of those tours last summer as well.

“One of the best things about this is that it gets people back outside and gets them exercising,” Carter said, adding he is looking at other possible tour locations to set up, including at Burkes Garden in neighboring Tazewell County and others.

“What sold me on E-bikes?” Carter asked. “I would say after having the opportunity to ride one, I was sold. The misconception is that an e-bike will pedal for you and that is not true — it is pedal assisted. Having an e-bike comes in handy when you are on that trail and if you get tired and need that extra help to get back home, you have the help you need. Also, you can travel basically the same distance as a regular bike, but just faster.

“It really is a game changer for those who want to ride with others,” Carter said, “it puts everyone on the same playing field.”

Carter said he used the VCEDA seed capital grant toward the purchase of additional e-bikes for his inventory, but noted COVID had been an issue since it made acquisition of the bikes difficult.

“The seed capital grant kept me going,” Carter said. “If it had not been for it, it would have been difficult for me to continue. It came at a time it was really needed.”