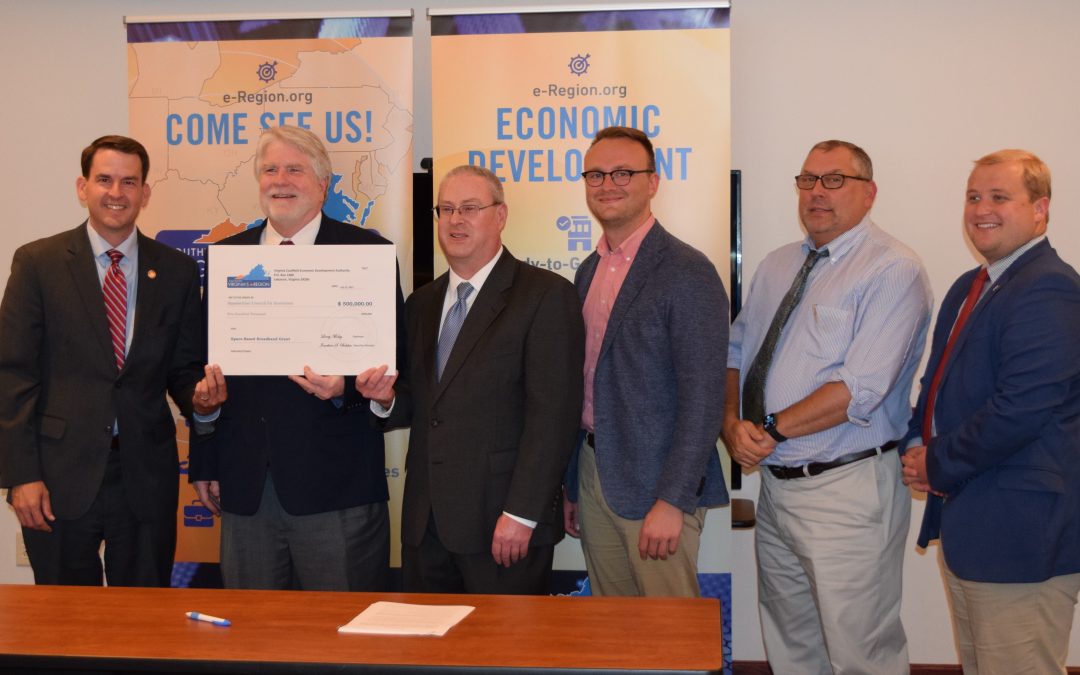 An up to $500,000 grant from the VCEDA Education and Telehealth Access Fund was closed Thursday with the Appalachian Council for Innovation (ACI) to be used toward the development of space-based broadband service in the VCEDA e-Region. On hand for the presentation were, from left, Senator Jeremy McPike, who patroned legislation in the General Assembly for the project; ACI President Donald Purdie; VCEDA Executive Director/General Counsel Jonathan Belcher; Tyler Lester, legislative aide for Sen. Todd Pillion’s office; Tom Lester, chief of staff for Sen. Travis Hackworth; and Cody Mumpower, with Ninth District Rep. Morgan Griffith’s office.

LEBANON, VA – JULY 22, 2021 — An up to $500,000 grant from the Virginia Coalfield Economic Development Authority (VCEDA) Education and Telehealth Access Fund was closed Thursday with the Appalachian Council for Innovation (ACI) to be used toward the development of space-based broadband service in the VCEDA e-Region.

VCEDA was appropriated $500,000 in the Virginia state budget during FY2022 “for initiatives intended to expand education and telehealth access.”  A budget amendment for this purpose was patroned in the General Assembly this past session by Senator Jeremy McPike and legislators from the VCEDA region.

The funds will be used to help provide low earth orbit space-based broadband service to unserved and underserved children in the VCEDA region. This followed a successful beta test of Starlink service through the Wise County, Va. public school system.

“I’m pleased to see this budget amendment come to fruition,” McPike said. “In 2020, the digital divide highlighted how critical the Internet is to success in every part of Virginia. This is an important first step to bridging that divide and I look forward to continue partnering with Southwest Virginians on these much needed investments.”

“VCEDA is pleased to award this grant from the Education and Telehealth Access Fund to the Appalachian Council for Innovation,” said VCEDA Executive Director/General Counsel Jonathan Belcher. “Expanding access to technology in our region is a critical component of economic development, especially is this time when education, tele-working, healthcare delivery and more have been utilizing technology connectivity through the Internet as a primary means for communication and service delivery.”

The Appalachian Council for Innovation successfully applied for the funding from VCEDA and will now continue its work with local school districts in the e-Region to establish the service. The VCEDA funds will be utilized to leverage local, state, federal and private grants and awards that ACI also plans to pursue for the initiative.

ACI is a 501(c)(6) non-profit Virginia corporation which is a membership organization that leads Southwestern Virginia in addressing technology issues of business, education and government with the purpose of enhancing the vitality and social well-being of Southwestern Virginia.  Council membership includes businesses, institutions, and individuals from Bland County south to Carroll County and west to Lee County.  ACI was formerly known as the Southwest Virginia Technology Council, and completed its formal name change to the Appalachian Council for Innovation in May 2021.

“Appalachian Council for Innovation is very appreciative for the funding from the Virginia Coalfield Economic Development Authority to help reach unserved and underserved school children in the region and to give them an equitable opportunity in the 21st century,” said ACI President Donald Purdie. “The unwavering support of State Senator Jeremy McPike and State Senator Todd Pillion to get the necessary funding for the e-Region is deeply appreciated.”

As proposed, low earth orbit space-based broadband, including costs and expenses of hardware, wiring and initial subscriptions for each household served will be provided through ACI to identified unserved and/or underserved children in households in the VCEDA region.  ACI is working with local school districts in the region to identify those households.

Purdie noted the Space Exploration Technologies Corporation (SpaceX) contract for the project has been executed and 300 accounts are expected to be in full operation in the month of September.  ACI hopes to do at least 300 more within the southwestern Virginia region by the first quarter of 2022, he added.

“Broadband access is education, economic development and quality of life all wrapped up in one,” said Senator Todd Pillion. “Given the topography and remoteness of parts of our region, innovative approaches to connecting that last mile are essential. That’s why I supported the Starlink pilot specifically for the coalfields and worked with Senator McPike and a bipartisan coalition of negotiators to ensure it remained part of the state budget. We’re excited for this game-changing project right here in Southwest Virginia.”

Senator Travis Hackworth also expressed enthusiasm for the project, noting, “I am so appreciative of VCEDA and the Appalachian Council for Innovation in having the foresight to invest in any and all new technologies that will bring access to the Internet in our communities. This will assist our counties in providing service to underserved students who require the Internet to achieve their educational goals. It also demonstrates a path forward to the future as technology changes with satellite capabilities offering a new and exciting opportunity for both education and economic development. This is the future and it looks brighter everyday with this type of initiative.”

“The importance of expanding broadband service in our region cannot be overstated,” said Delegate Will Morefield. “The funding announced today for the Appalachian Council for Innovation from the VCEDA Education and Telehealth Access Fund is one more critical step in achieving broadband access for all. As a member of the House Appropriations Committee, I am pleased to have been a part of the effort through the Virginia General Assembly to allocate specific funding for this initiative and I look forward to seeing it come to fruition in the very near future.”

“Bringing reliable high speed Internet to the region is the most important thing we can do for southwest Virginia,” said Delegate Will Wampler III. “This $500k will expand access to the Starlink low earth orbit broadband network. This low earth orbit technology is going to be a crucial part of ensuring broadband access to all southwest Virginians. I look forward to continuing to work with VCEDA  and our national and regional partners to bring about a digital revitalization in the region in the coming years.”

Ninth District Congressman Morgan Griffith noted, “I am pleased to see these funds awarded to the Appalachian Council for Innovation for the purposes of broadband development in the VCEDA region. Satellite broadband service has proven successful in connecting students in Wise County. I look forward to seeing the expansion of satellite broadband service, particularly for educational purposes in Southwest Virginia. This new technology should accelerate access to broadband in our region.”