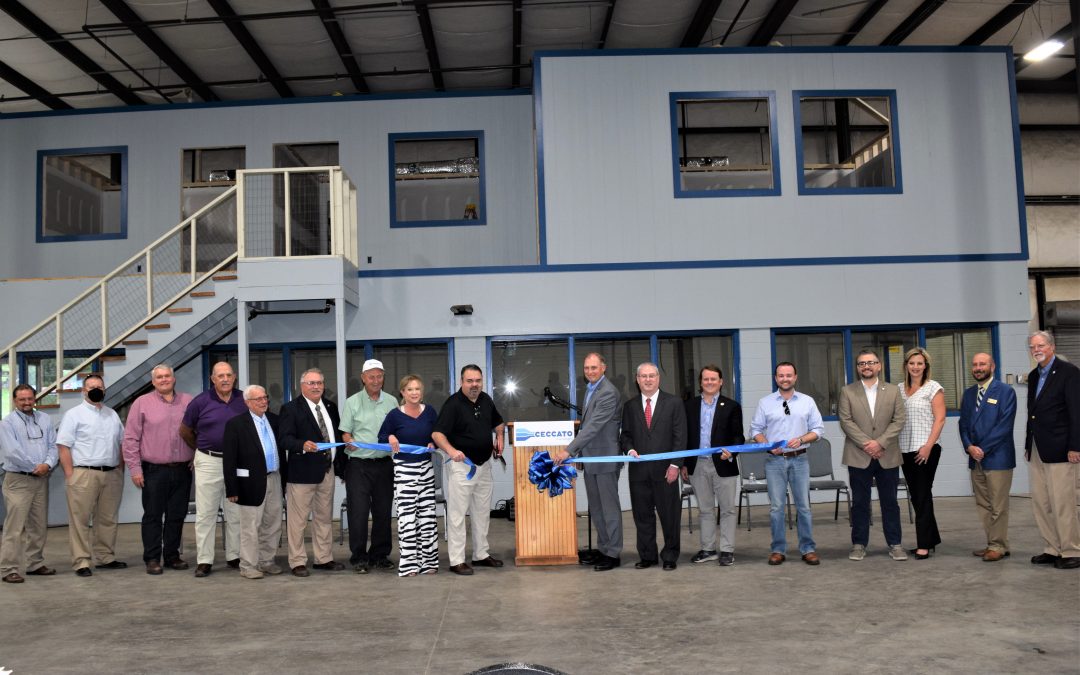 The ribbon was cut following the announcement Thursday that Italy-based Ceccato S.P.A. will locate its first United States subsidiary, Ceccato USA Corporation, in Lebanon, VA, bringing with it up to 50 new jobs in three to five years.

LEBANON, VA – SEPTEMBER 9, 2021 — A ribbon-cutting ceremony marking the announcement that Italy-based Ceccato S.P.A. will locate its first United States subsidiary, Ceccato USA Corporation, bringing with it up to 50 new jobs within three to five years in Russell County, Va., was celebrated Thursday at the company’s new location in the Russell Place building.

The announcement that the new company will operate in 51,830 square feet of the Russell Place building at 122 Haber Drive in Lebanon, Va., was celebrated by company representatives, Russell County officials, state and federal representatives and the Virginia Coalfield Economic Development Authority (VCEDA).  VCEDA worked with the Russell County Industrial Development Authority to help Ceccato USA Corporation locate to the Russell Place. 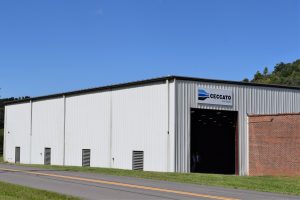 The new company will occupy a 51,830 square feet of the Russell Place building in Lebanon.

The parent company, Ceccato S.P.A., was founded in 1936 and is one of the leading Italian manufacturers in the field of washing systems and equipment for all vehicles, from cars to trains. It has a presence in more than 60 countries where it installs Rollover units for car washes, gas stations, and car dealerships as well as conveyor tunnels, self-service systems and train washing units, also offering after-sales support. It also has subsidiaries in Germany and Brazil.

At its new Lebanon, Va., location, initially, the company will assemble and sell car wash units and will also manufacture truck wash units, sourcing items needed to manufacture those from U.S. companies.

Jimmy Sisk, Ceccato USA president and CEO, noted an initial capital investment of $1.75 million is projected by the company within the first four months.

“First, you must have product to market to prospective companies and the IDA’s decision with help from VCEDA to acquire the building earlier this year was a critical factor in being able to land this project.  Second, economic development requires a team approach of people and organizations working together and this project is another perfect example of that,” Belcher said.

“It is very exciting that Ceccato USA has chosen to locate their first American plant in Lebanon, Virginia,” said Russell County Industrial Development Chairman Ernie McFaddin. “This is a great addition to our community that will continue to diversify the local economy.  The company will be located in a property that was recently acquired by the IDA with the assistance of VCEDA.”

Virginia Senator Travis Hackworth expressed his appreciation to all who have been involved in bringing Ceccato USA to Russell County.

“This announcement with the Ceccato USA Corporation reinforces the importance of VCEDA’s role in the region and how important it is to recognize the diversity of our labor market here in Southwest Virginia,” Hackworth said. “We are excited to have the projected 50 new jobs and I believe this is only the beginning. My sincerest appreciation to all those involved in bringing this company into Lebanon.”

“Attracting Ceccato USA, an Italy-based, multi-national company is a huge win for Russell County and Southwest Virginia,” said Virginia Delegate Will Wampler III. “To attract a company with an 80-year track record of manufacturing excellence speaks to both Ceccato’s and our region’s desire to push forward and remain competitive in a global market.”

Virginia Delegate Will Morefield noted the project is indicative of the success of efforts being made to continue to diversify the region’s economy.

“This is exciting news for our region and another example of strong efforts to diversify the economy,” Morefield said. “I commend the Virginia Coalfield Economic Development Authority and Russell County for their hard work. We are thankful Ceccato USA is committed to our region.”

Already, component parts needed for the Virginia plant are on ships on the way to the U.S., Sisk said.

“We expect those to be here by late October or early November and will be adding U.S. parts to those to assemble the systems here in Lebanon using local suppliers,” he added.

In the meantime, Sisk said Ceccato USA will be getting the Russell County building ready, outfitting it with a crane and getting forklifts on site. 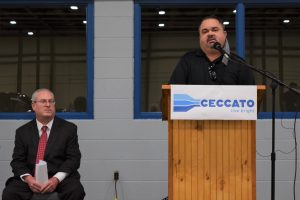 Sisk noted that prior to selecting Lebanon as the location for its new U.S. operations, the company also considered locations in North Carolina, West Virginia and other locations in Virginia.

“Frankly, we looked at those other locations, but we did not find anyone as welcoming to us as what we found in Ernie and Jonathan,” Sisk said of McFaddin and Belcher. “Every single time we came to Lebanon to look at the possibilities, they were welcoming and took good care of us and that played into our final decision of where to locate. We could have located anywhere. We feel very thankful and blessed that it is the Lebanon location.”

Sisk noted the company will be hiring a number of assembly workers at an average wage of $15 per hour plus benefits, with initial employment in the 10-12 range this year, but ramping up to 30-50 employees within three to five years. Those interested in employment, Sisk said, may contact him at jimmys@ceccatocarwash.com.

“The investment by Ceccato Group of $1.75 million to locate in Lebanon, Virginia is welcome news,” said Ninth District Congressman Morgan Griffith. “I am happy that Lebanon was selected as the site of Ceccato’s first United States-based manufacturing facility, which looks to bring 30 to 50 jobs to the area over the next three to five years.”

“This company will bring life back to a property that has been vacant for almost two decades,” McFaddin added. “We have truly enjoyed working with Jimmy and look forward to helping the company grow for many years to come.”

Steve Breeding, a member of the Russell County Board of Supervisors in whose district the new company will be located, also offered brief remarks thanking VCEDA and noting the team approach to economic development in the coalfield region, noting what a joy it was to take part in Thursday’s announcement.

Turning to Sisk, he added, “we look forward to a great future here.”

“On behalf of myself and the Lebanon Town Council, we would like to welcome Ceccato’s first American facility to our town,” Lebanon Mayor Tony Dodi noted. “Their investment and job creation will meet an essential need in our community, county and surrounding areas. We wish for them success and growth as they begin their new venture, investment and operations in our town.  As always, as a governing body and town, we stand ready to assist them in any way to assure their success.”

Cumberland Plateau Planning District Commission Executive Director Jim Baldwin noted the announcement was “great news for Russell County and the surrounding area. We’re pleased to see Ceccato invest in the Town of Lebanon and provide new, meaningful job opportunities here in the coalfields. On behalf of the PDC, we congratulate Russell County on this exciting economic development project.”

The event concluded with a ribbon cutting ceremony facilitated by the Russell County Chamber of Commerce.