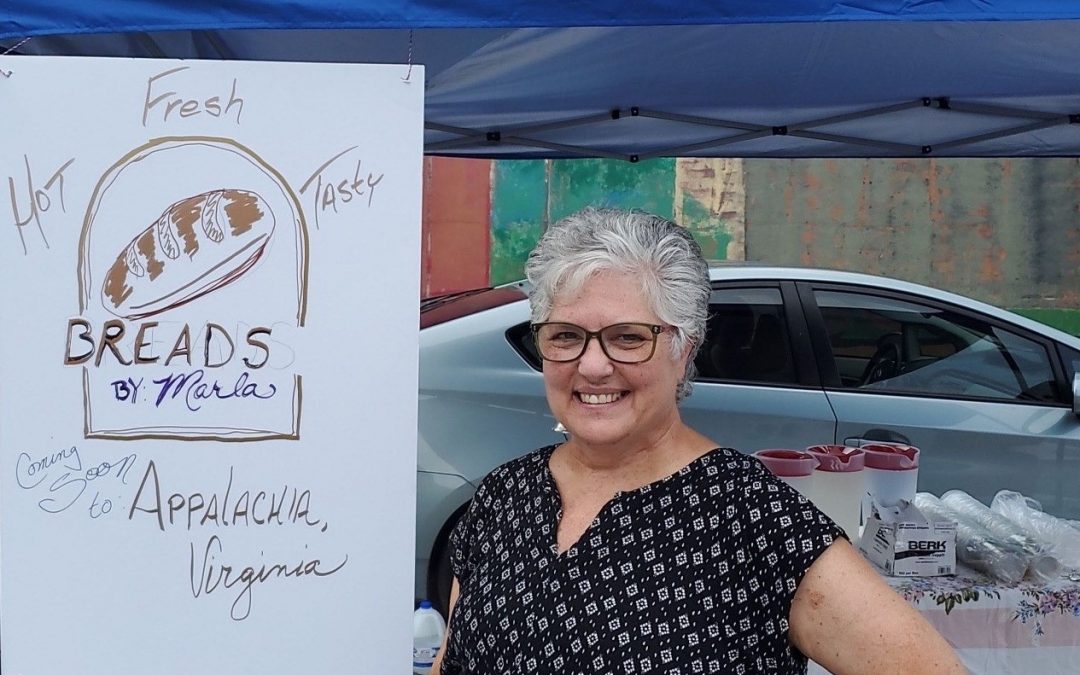 Marla Weitzman’s new business, Breads by Marla, was a recent recipient of a VCEDA seed capital matching grant. Utilizing the grant and other financing, Weitzman has opened a commercial kitchen, enabling her to expand her business and go from selling her breads solely at area farmer’s markets, to working with area restaurants to supply their bread needs.

APPALACHIA, VA – SEPTEMBER 29, 2021 — From quick breads to cinnamon buns, pound cake to pretzels and more, Breads by Marla, operated by Big Stone Gap resident Marla Weitzman, has been a familiar sight at area farmer’s markets in the past, but now, with the help of a $6,500 Virginia Coalfield Economic Development Authority (VCEDA) seed capital matching grant, Breads by Marla is opening a commercial kitchen and supplying area restaurants with the breads Weitzman has become famous for in the region.

“Assisting entrepreneurs to grow their small businesses and to create new jobs is what VCEDA’s seed capital matching grant program is all about,” said VCEDA Executive Director/General Counsel Jonathan Belcher. “Breads by Marla was already working in the farmer’s market circuit, but had a solid business plan to work with area restaurants and expand to operate a commercial kitchen, in the process projecting to create one full time and three part-time jobs within five years.”

Weitzman noted the seed capital grant from VCEDA has assisted her in purchasing some of the materials she needed for the commercial kitchen at 520 West Main Street in Appalachia. From stainless steel work tables to anti-fatigue mats, to basic renovations, the grant, she said, has been valuable.

“The seed capital grant is what is making it possible for me to expand my business,” Weitzman said. “I could still keep baking for farmer’s markets out of my home kitchen, but without the commercial kitchen, approved by the Virginia Department of Health, I was unable to sell my products to area restaurants.”

The commercial kitchen officially opened earlier this month, making Weitzman, she said, the first commercial baker in the area.

“There are other bakeries, but they don’t do the things I do which are loaves of bread, from savory to sweet, pretzels to scones,” Weitzman said. “I can make anything as long as I find a good recipe for it.”

In addition to hiring a full-time employee to assist with the day-to-day management of the business, Weitzman noted she plans to work with the culinary school at MECC’s workforce center in Appalachia to bring in interns once that program is up and running. The space where the commercial kitchen is located is large enough to accommodate additional tenants and Weitzman said she is actively talking with others about utilizing the space in the building that she does not need for the commercial kitchen.

Her advertising pitch on the Breads by Marla Facebook page is pretty simple, but says it all — “The best thing since sliced bread is someone else making it for you from scratch, right?”

Gluten-free breads are available and include sandwich bread and banana nut bread, only by pre-order.

Her new location is in the center of town in Appalachia, next to the post office.

Weitzman worked with the Small Business Development Center at Mountain Empire Community College (MECC) in the development of her application to VCEDA and received a letter of support from the Wise County Industrial Development Authority.

“It is always great to see a lifelong dream come to life,” said Becki O’Quinn-Purdie, director of the MECC Small Business Development Center. “Local and regional restaurants have a wonderful opportunity to utilize Marla’s Breads to offer some great dessert and baked options.  She has built a strong reputation and the VCEDA Seed Capital Fund has allowed her to expand her dream into a viable business.”