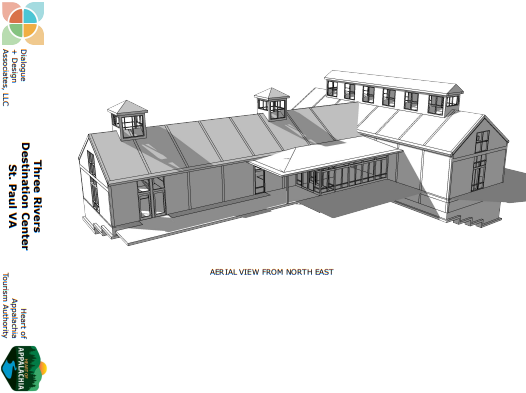 ST. PAUL, VA – FEBRUARY 1, 2022 — An up to $50,000 grant from the Virginia Coalfield Economic Development Authority (VCEDA) Tourism Capital Improvement Matching Fund to be used toward financing the development and construction of the new Three Rivers Destination – Discovery Center in St. Paul was recently closed with the Heart of Appalachia Tourism Authority.

“The construction of the Three Rivers Destination Center will result in the location of a regional tourism visitor center in VCEDA’s e-Region,” said Jonathan Belcher, VCEDA executive director/general counsel. “Having a one-stop location to provide information about the many tourism opportunities in our region will be beneficial not only to travelers, but to the various businesses and tourism assets in the region which will be marketed through the Three Rivers center. One new full-time job is projected to be added within two years, adding to the Heart of Appalachia’s existing employment of five full-time and two part-time employees.”

The Heart of Appalachia Tourism Authority (HOA) was created by the Virginia General Assembly in 1993 to “promote, expand and develop the tourism industries of this coal-producing region as a whole.”  HOA covers the same eight localities as VCEDA does.

The location of the new center is on land adjacent to the Clinch River, just north of US 58A at St. Paul. It is planned to be used as a “gateway” center accessing the Clinch, the Guest and the Powell Rivers, then spoking out to other communities in the area.

The location of the new center is within the viewscape of the Clinch River and is the geographic center of the region, making it easily accessible from all counties within the Heart of Appalachia footprint and less than a day’s drive from a number of adjacent states. It is located close to the Clinch River State Park, the Jefferson National Forest, Breaks Interstate Park and other recreational amenities.

The new center will highlight the area’s recreational assets, help visitors plan trips and connect tourists with regional tourism amenities and related businesses currently numbered at 600-plus in the region which are responsible for employing more than 1,900 people with a payroll of $40 million throughout the seven-county, one-city region.

The Three Rivers Destination – Discovery Center will be situated on an approximately two-acre site. The new building will feature a lobby/reception area, exhibit area, gift shop, conference room, restrooms, storage rooms and offices for HOA which will be relocated to the site.

“The Three Rivers Destination Center is a needed project in the Heart of Appalachia region because we lack that one place where a person can go to receive information about things to do in the entire seven-county and one-city region,” said David Woodard, HOA Tourism Authority executive director. “Each county may have a visitor center, many towns do and state parks do an excellent job with information for visitors. However, we are one of the only places in Virginia that does not have a regional visitors center.”

He added VCEDA was a great match for the project because of the flexibility in the funding received  which allows HOA to maximize its projected spend on the estimated $2.67 million overall project.

“We are very appreciative to VCEDA and the great work they do in the region and the excellent relationship they have with Heart of Appalachia,” Woodard said.