VCEDA Board Approves Projects Anticipated to Create More Than 100 Jobs

LEBANON, VA – FEBRUARY 18, 2022 — Several projects anticipated to create more than 100 new full-time and part-time jobs in Southwest Virginia’s e-Region were approved Thursday during a meeting of the Virginia Coalfield Economic Development Authority (VCEDA) Board of Directors.

The board welcomed two new members – Scotty Wampler, the new executive director of the Cumberland Plateau Planning District Commission (CPPDC); and Andy Hrovatic, representing the Tazewell County Board of Supervisors. 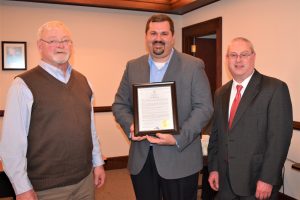 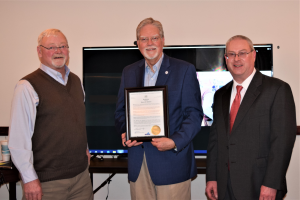 Jim Baldwin, center, was presented with a framed resolution recognizing his long-time service to the VCEDA board and the region during Thursday’s meeting of the board. Baldwin recently announced his retirement as the Cumberland Plateau Planning District Commission executive director. At left is VCEDA Chairman Larry Mosley and at right is VCEDA Executive Director/General Counsel Jonathan Belcher.

Jim Baldwin, who announced his retirement from the CPPDC earlier this month, but who will stay on as CEO of that organization through June, was recognized with a resolution honoring his long-time service on the VCEDA board and to the region. In addition to serving as a member of the board, Baldwin also served as its secretary. J. P. Richardson was named the new secretary of the board during Thursday’s meeting.

A resolution honoring the life and work of Wise County Industrial Development Authority (IDA) Executive Director Carl Snodgrass, who died earlier this month, was also adopted by the board. Snodgrass, it was noted in the resolution, was instrumental in the economic development and economic diversification of Wise County, having worked on hundreds of projects throughout his career which led to the creation of thousands of jobs for the citizens of Wise County and the coalfield region of Virginia.

In other action at Thursday’s meeting, the board approved:

In other business, the board agreed to forgive a $500,000 loan to the Southwest Regional Recreation Authority (SRRA) and to convert it into a grant. The funds were used for the development of trails in Dickenson County, including the Ridgeview Trail system at Haysi. SRRA drew down $350,936.93 of the original loan amount and requested the amount be converted into a grant after the demonstrated success of the trails.

A disbursement deadline for an up to $433,000 grant to the Breaks Interstate Park for the Potter’s Flats Swinging Bridge and various other infrastructure improvements was also extended.

Lastly, the board agreed to allow the Tazewell County Industrial Development Authority to lease the Bluestone shell building for a pending project.  In 2017, VCEDA approved an up to $2,739,700 loan to the IDA for the construction of the shell building.