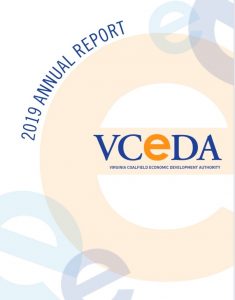 LEBANON, VA – MARCH 19, 2020 — Fifty new projects and expansions were announced in 2019, the highest number in the Virginia Coalfield Economic Development Authority’s 31-year history, the details of which are highlighted in the organization’s annual report released today.

The 50 projects and expansions are projected to create 575 full-time and part-time jobs and more than $29 million in private investment and involved projects approved during 2019 in all eight localities in the VCEDA region which includes Buchanan, Dickenson, Lee, Russell, Scott, Tazewell and Wise counties and the City of Norton.

“This year was another historic year for the Virginia Coalfield Economic Development Authority,” said Jonathan Belcher, VCEDA executive director/general counsel. “Not only did VCEDA set records in 2019 for the number of loan and grant approvals and loan and grant closings, but also for the number of marketing events and prospect visits in which VCEDA was involved, making 2019 the most active year in the history of VCEDA.”

Some of the projects announced during the year included Canadian manufacturer Polycap’s decision to locate its first U.S. manufacturing facility in Russell County, bringing with it 65 jobs; the Paul’s Fan Company back-to back announcements of an expansion in Buchanan County and its new endeavor in Lee County, bringing a combined total of 55 new jobs and retention of 42 jobs; the Sykes-Intuit expansion bringing 154 jobs to Wise County; the Carbon Research and Development Co. bringing with it 35 new jobs to Wise County; and the Lawrence Brothers Inc. expansion in Tazewell County which will bring 28 jobs. A number of tourism-related projects also were announced in 2019.

VCEDA approved nine loans and 48 grants during the year, the highest number in VCEDA’s history. Those loans and grants totaled more than $18.8 million. Thirty-six of the grants approved in 2019 were to assist new business start-ups in the region through VCEDA’s extremely popular Seed Capital Matching Fund, first established in 2017. Since 2017, VCEDA has approved seed capital grants for 70 new business start-ups in the region, involving a projected 616 full-time and part-time jobs and more than $4.2 million in private investment.

Establishing relationships with site consultants and others involved in foreign direct investment (FDI) continued as an outreach target area. VCEDA again exhibited at and participated in the SelectUSA Investment Summit in Washington, DC, the highest profile event promoting FDI in the United States. VCEDA also met with site consultants at networking events in Dallas, Texas and Chicago, Ill., during the year and participated in call trips in Indiana and West Virginia.

Attendance at such events is for the purpose of promoting the region as a great place to do business and to generate leads with companies who may be looking to locate or expand their operations.

VCEDA was also involved in 70 prospect visits during the year, the most ever recorded by VCEDA. The authority handled 174 inquiries throughout the course of the year. These inquiries and prospect visits ranged from industrial prospects to new business start-ups. 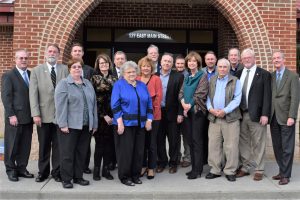 “VCEDA is now using a multifaceted approach to economic development, which continues to involve traditional industrial recruitment and supporting the expansion of existing industries, but also includes assisting new business start-ups and promoting the growth of the tourism industry in the region,” Belcher said. “We believe that this more comprehensive approach to the region’s economic development will yield better results than only focusing on just one or two elements.”

“The level of activity and interest in our region during 2019 was notable,” Belcher said, adding, “the success that VCEDA and the coalfield region enjoyed in 2019 was made possible by a team approach. Elected officials, economic, community and workforce developers, educational institutions, localities, industrial development authorities, private businesses — including the coal and natural gas industries – are team members who are key to positive progress in our region. We look forward to working with them again in 2020 to continue to build and diversify the region.”

The 32-page 2019 Annual Report is available for download at www.vceda.us.