GRUNDY, VA – APRIL 19, 2022 — The Virginia Coalfields Expressway Authority (CFX) board met Monday afternoon and was joined by U.S. Sen. Tim Kaine to talk about the future of the expressway project and what $1.995 million in new federal funding appropriated for the project will mean to advance it. Also discussed were ways to continue to move the project forward which saw the authority agree to a motion to seek further congressionally directed spending to pave 2.2 miles of U.S. 121 (CFX) within the Corridor Q project to four lanes. Current paving funds allocated call for paving of just two lanes and a truck climbing lane.

Corridor Q is adjacent to the industrial park at Southern Gap in Buchanan County.

The Virginia Coalfields Expressway Authority was created by the Virginia General Assembly in 2017 “to improve the transportation into, from, within, and through Southwest Virginia, assist in regional economic development, and generally enhance highway safety in the affected localities.”

The authority has a 12-member board comprised of representatives from the counties of Buchanan, Dickenson and Wise.

In a roundtable discussion with Sen. Kaine at the Southern Gap Transportation and Logistics Center following a brief overview of the project provided by Belcher, and an update on the route construction by Marty Halloway of the Virginia Department of Transportation, the benefits of coal synergies to developing the roadway were emphasized. Also taking part in the discussion were representatives of the Appalachian Regional Commission and Virginia Sen. Travis Hackworth. 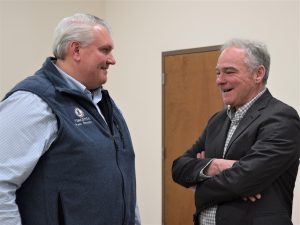 Virginia Senator Travis Hackworth, left, chats with U.S. Sen. Tim Kaine following Monday’s meeting of the Virginia Coalfields Expressway Authority Board in Grundy, Va. The future of the expressway project and what $1.995 million in new federal funding appropriated for the project will mean to advance it were among the items discussed at the meeting.

VDOT estimates on the completion of Corridor Q are that the segment of the roadway from the Kentucky state line to Route 744 (Southern Gap Road) will be early fall 2023; Route 744 to Route 604 (Poplar Creek), early 2025; and Route 604 (Poplar Creek) to Grundy, late 2027. The last segment in the Corridor Q section will be the location of the second tallest bridge in the state of Virginia. The $1.995 million recently appropriated at the federal level is for pre-engineering of the roadway from Grundy to the West Virginia state line.

James Keen, a member of the authority board, who also serves as chairman of the Breaks Regional Airport Authority and who is a former member of the Virginia Commonwealth Transportation Board, noted that on the Hawk’s Nest section of the project, mining coal while constructing the roadway had saved some $90 million.

“We need to be exploring and encouraging coal companies to identify locations they have interest in because through these synergies we can have great impact,” Keen said.

Kaine suggested that with the abundance of metallurgical coal in the region and the push at the federal level to encourage domestic production of steel, additional synergies might also be found.

CFX Authority Board Chairman Jay Rife noted when he first began to serve on the Buchanan County Industrial Development Authority, where he still serves today, he had seen the availability of land to develop, such as that found at Southern Gap, had increased significantly.

Tom Smith, with the ARC, noted permitting is critical and he suggested “time is of the essence” to “strike when the market is good.”

“This is a good time to hit the pedal to metal on this project,” Kaine said, adding, “I look forward to working with this board on it.”

Kaine said he has followed the progress of the CFX project through the years and he said with additional investments now being made at the federal level in infrastructure, projects like the CFX are advancing.

“This is a necessary project,” Kaine said. “It’s not easy. It’s not cheap, but with the infrastructure bill, the American Rescue Act and return of earmarks to the federal budget, there are resources there.”

Kaine said he works in tandem with Sen. Mark Warner and Congressman Morgan Griffith on Virginia projects and he added that Virginia has a monthly luncheon where all Virginia senators and congressmen meet to talk about priorities for the state.

“This is a project we can try to get support for from other members of the (Virginia) delegation,” Kaine said. He suggested that with state funds how they are and additional federal monies out there, “this is the right time to push.”

The recently allocated $1.995 million for pre-engineering, he said is important because planning is important.

“You’ve got to plan it right to do it right,” he said.

Tom Smith, with the ARC, noted that the influx of federal money into the project will allow for the acceleration of work on the project. He noted big highway projects take decades to finish, but said he was thrilled to see the excitement on the project and the interest in the project from both Virginia and West Virginia.

Hackworth noted that from a logistics standpoint alone, the expressway project is critical to businesses in the region to move goods from one location to another. He urged those present to review a Chmura study on the project which showed the return on investment for the project is significant.

“We need the Coalfields Expressway built,” Hackworth said. “We are committed to do what we can with the resources we have to see this project built. It’s baby steps. We appreciate the help on the federal side and we’ll take all the help we can get.”

Belcher noted an important role of the CFX Authority is to keep the momentum on the road project going.

“It’s about keeping the enthusiasm and optimism going,” Belcher said.

He asked if there was a possibility of U.S. 121, the designated Coalfields Expressway route, could be added to the Appalachian highway system, not just Corridor Q, but the entire length of the proposed project.

Also discussed were workforce needs and getting that piece of the puzzle correct as construction on the expressway project moves forward in the future.

“We realize the clock is ticking in Southwest Virginia,” Hackworth said. “It is very critical we act now and the sooner the better.”

The CFX Authority Board will meet again in June or July.