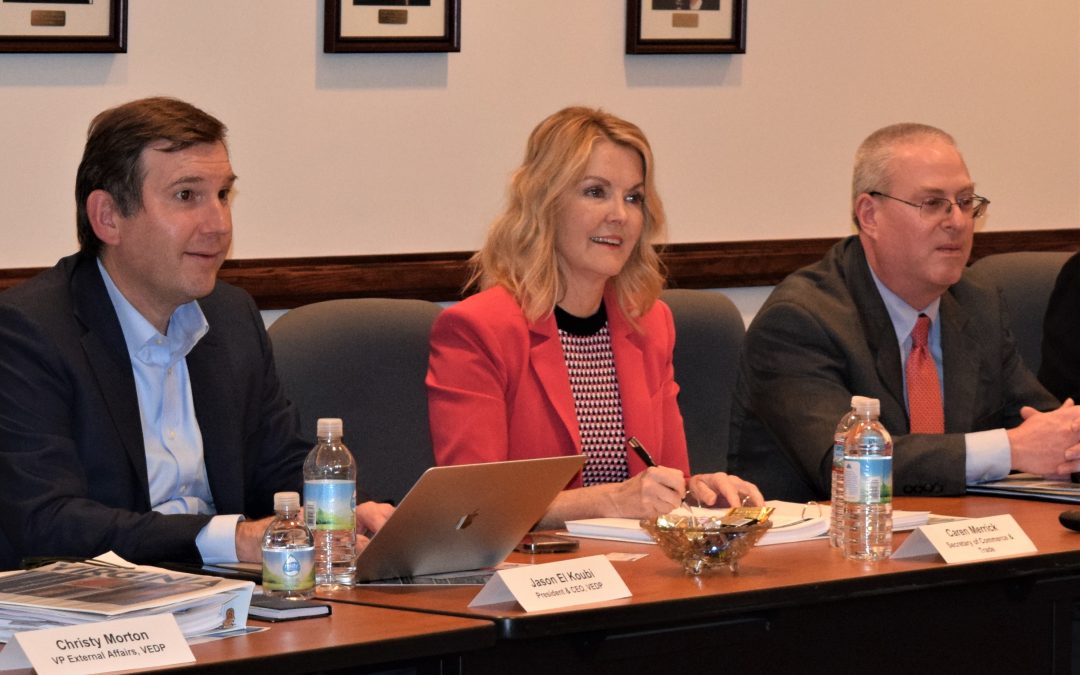 VCEDA also hosted a luncheon in honor of Merrick and El Koubi attended by approximately 100 Southwest Virginia state and local elected officials, economic developers and other Southwest Virginia leaders. The luncheon was held at the Russell County Conference Center where attendees also heard a brief update on the Pure Salmon project now under construction. 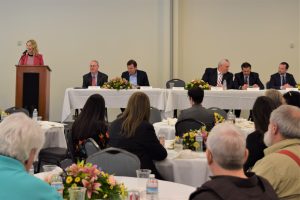 Virginia Secretary of Commerce and Trade Caren Merrick addresses attendees at a luncheon hosted by VCEDA, Tuesday in Lebanon. Pictured with her, from left, are VCEDA Executive Director/General Counsel Jonathan Belcher; VEDP President & CEO Jason El Koubi; Sen. Travis Hackworth; Del. Terry Kilgore; and Del. Will Morefield. Merrick and El Koubi have been in the coalfield region this week and while here participated in a number of roundtable discussions related to economic development, education, workforce and met coal hosted by VCEDA. They also visited several of the larger employer locations in the region.

VCEDA Executive Director/General Counsel Jonathan Belcher opened the roundtable sessions at VCEDA’s offices Tuesday morning, presenting an overview of VCEDA and its programs and providing Merrick and El Koubi and their staff participants with some key facts about the Virginia coalfield region which is comprised of the seven coalfield counties and the city of Norton in Southwest Virginia. VCEDA promotes the region as Southwest Virginia’s e-Region, which Belcher said, comes from the key focus areas of VCEDA and the region including electronic information technology, energy, education, emerging technologies and entrepreneurship.

“VCEDA works with a whole host of allies in working leads and projects,” Belcher said. “Our success is made possible because of the outstanding teamwork we enjoy in the region. There is no ‘I’ in team. We must all work together for the region to succeed and prosper.”

Belcher noted 14 state capitals are within a 500-mile radius of the region, which he defined as the geographic center of the east coast because of its location within a day’s drive of half the U.S. population.

Statistically, Belcher noted that from July 1, 1988 to April 30, 2022, VCEDA has approved more than $263 million in funding for 544 projects throughout the region and helped attract more than 20,000 direct jobs.

He noted VCEDA’s role in helping to bring jobs to the area and control regional unemployment rates has been verified by several studies, including a 2007 study completed by Virginia Tech and 2012, 2015 and 2018 studies completed by Chmura Economics & Analytics. Virginia Tech also studied VCEDA’s Seed Capital Matching Grant program in 2021 and found a 34:1 return on investment ratio.

He added that the 2018 Chmura study found “VCEDA has helped diversify the regional economy significantly since 1990,” Belcher said. “In 2018, the diversity index of the region was 32.8 percent, which is a dramatic improvement from 12.6 percent in 1990.”

She noted her office is seeking to work with state offices, like VEDP, the Department of Education and others to determine ways they can work together to incentivize things and in the workforce arena, explore how to make apprenticeships and internships work. 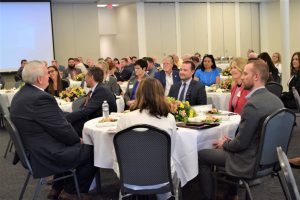 At the luncheon, she noted, “you all are the experts at this. Governor Youngkin and I really understand the challenges of starting and growing a business and we want to work with you collaboratively to make it happen here. I see the collaboration you have and I want to double down on that.”

She noted she wants to be there to assist in removing barriers to development and she pointed out that in discussions with other business leaders, it was evident that speed is the new top incentive to development. Having ready sites and workforce are two keys, she added.

“We need to work together to achieve what these businesses are looking for,” she said. “Contact our office if we can help and together, we will make Southwest Virginia flourish.”

El Koubi agreed with Merrick that businesses are looking for high quality project ready sites and he added that “the Commonwealth is investing in site development now like never before.”

He noted “economic development is a team sport and a big part of our work is to be partners at every level across the Commonwealth.”

El Koubi noted VEDP is focused on 14 target industry sectors, many of which match those targeted specifically in the VCEDA e-Region.

“Southwest Virginia,” he said, “can win in a bunch of different sectors.”

“We want to put the ‘p’ in Virginia Economic Development Partnership,” El Koubi said, referencing the emphasis on being a partner.

Following the luncheon, Merrick and El Koubi met with the Metallurgical Coal Producers Association (MCPA) to discuss the region’s laser focus on metallurgical coal production through its newest branding initiative which points out simply, “Met Coal Makes Steel.”  The producers who comprise the MCPA, many of whom were present at the meeting, including Alpha, Coronado and MetInvest, pointed out that without met coal there is no steel.

“Coal is not something of the past, but part of the future,” said MCPA’s President Ben Beakes.

Belcher noted that in the unique way VCEDA was set up by the legislature to be funded – through a portion of coal and natural gas tax severance receipts —  those two industries are responsible for having funded about 90 percent of the VCEDA region’s economic development throughout the years.

“Met coal makes steel is a powerful statement,” Merrick said. “We want to help you amplify it.”

In addition to the roundtable discussions held Tuesday, Merrick and El Koubi also toured UVA-Wise and had dinner at the college. They also toured several major employer locations in the region during their visit.