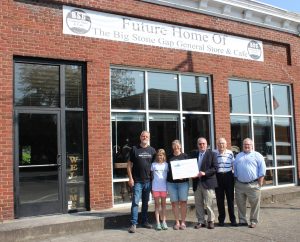 BIG STONE GAP – AUGUST 16, 2019 — Brian and Penny Jeffrey have spent their careers serving North Carolina colleges and after a family visit to Big Stone Gap, decided it was time to explore the idea of starting a business in the town where Brian grew up. The Jeffreys envisioned turning the historic Big Stone Gap Post building – home of the community’s first newspaper – into a general store and café. Fast forward three years and the Jeffreys are renovating the building now with plans to open The Big Stone Gap General Store & Café by the end of the year or early spring.

The Big Stone Gap General Store & Café, LLC was recently approved for a $10,000 seed capital matching grant from the Virginia Coalfield Economic Development Authority (VCEDA), which Penny Jeffrey said has made it possible to optimize planning and move forward with development.

The mission of the new business is to provide visitors with a general store mercantile experience that showcases the historic charm of the Town of Big Stone Gap. Planning calls for it to offer fast casual food and beverage selections, including craft beers and wines, as well as also offering a space for musicians and local artisans to showcase their work and sell their goods and services. A key feature of the café will be a coal-fired pizza oven that runs on anthracite coal.

“We are still in the process of upfitting the building, trying to maintain its history as we do so,” Jeffrey said. “We’re reworking the original floors, leaving in the press pulleys and have exposed block from the late 1800s. We’re trying to save those elements.”

The Jeffreys are doing a lot of the renovation work in the building themselves and have contracted other parts of it to licensed contractors they have working on the project. Included in that work is making the restroom facilities ADA-compliant. A sign over the door proudly notes the historic building is the future home of The Big Stone Gap General Store & Café.

Commuting back and forth from North Carolina where they have put their farm up for sale in preparation for their full-time return to Big Stone Gap, the Jeffreys have bought a house near the new store – within bicycle distance for them and their daughter, Olive, a seventh grade student.

The VCEDA seed capital funds are being used toward some of the renovations and also to purchase the coal-fired pizza oven which will be coming from California.

“The seed capital grant was vital to helping us with this project,” Jeffrey said. “As a small business owner starting out you don’t have a lot and the seed capital grant has helped us to optimize our ability to be able to upfit the building, to purchase the coal-fired pizza oven and to give us an opportunity to showcase the town. It’s invaluable to small business owners.”

Jeffrey said she got the idea to develop The Big Stone Gap General Store & Café after standing in downtown Big Stone Gap and looking at an empty building.

“It hit me like a lightning bolt that we should open a general store and café. After that I went home to North Carolina and wrote a full business plan,” Jeffrey said.

“I walked into The Post building and knew it was the one,” Jeffrey recalled. “I was startled by having intense, confirming feelings that this idea should be.”

As the idea continued to develop and as the Jeffreys began working through the details of starting their new business, Jeffrey said she read a newspaper article about another VCEDA seed capital recipient, The Well Coffee Shop, in Tazewell County.

“I read that story and was struck by the fact that we had a similar experience in terms of knowing that this was the place and what we should do,” Jeffrey said, referencing the Well owners’ experience in developing their own business.

The Big Stone Gap General Store & Café is located at 215 E. Wood Avenue. A website will be developed and the store already has a Facebook page where regular updates are posted about the renovation process.

The Jeffreys worked with Tim Blankenbecler, of the Small Business Development Center at Mountain Empire Community College, in the final development of their business plan and application to VCEDA.

“Tim and the SBDC at MECC are a crucial resource for people in our position,” Jeffrey said. “He was able to guide us through thinking about important logistics and we owe many thanks to him.”