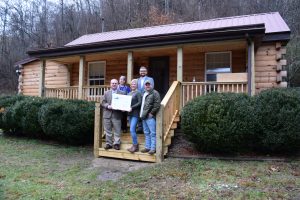 GRUNDY, VA — (DECEMBER 27, 2019) – When Billy and Brooke Owens finish the renovations on the Hoot Owl Hideaway cabin and property they recently purchased in Grundy, Va., they have plans to add an additional cabin as they grow their cabin rental business near Spearhead Trails’ Coal Canyon Trail.

“Assisting small businesses to achieve their individual growth plans while at the same time creating jobs is what the VCEDA Seed Capital Matching Grant fund was set up to do,” said Jonathan Belcher, VCEDA executive director/general counsel. “Daisy’s Cabins has plans to both renovate an existing cabin and to build a new cabin, which further fits with VCEDA’s past support for tourism-related projects in Southwest Virginia’s e-Region.”

The Owens’ first cabin, “Hoot Owl Hideaway” is located on 42 acres of property on Hoot Howl Mountain in Buchanan County and is already being rented while renovations are ongoing inbetween rentals. The cabin was originally a two-room log house built in the late 1800s. The Owens’ noted it has seen several owners through the years and has undergone a lot of renovations and additions to get to its current state. Earlier this month, the front porch was re-done and the interior of the home also went through several upgrades – from flooring and paint to the enclosure of a back porch area into a mud room. The cabin features two bedrooms and one bath. One bedroom contains a full-size bed and the other contains a full-size bed and twin bunk beds. There is also a queen sleeper sofa. A fully equipped kitchen is also part of the rental which sleeps up to 10. Plans are to add a second bathroom to the property.

“Being a small business, there’s no way we could have afforded to do all the renovations we needed to do without the VCEDA grant,” Owens said. “Seeing families gather here and bringing the house back to life has brought great joy to us.”

The cabin is primarily marketed to ATV riders due to its proximity to Coal Canyon, however, the property also features a pond stocked with catfish for those who might want to do a little fishing while they are in the mountains.

“We were not really looking to start a business, but it just fell into line,” Billy Owens said. “My parents built a cabin several years ago and the Coal Canyon Trail runs through their property and then we purchased the Hoot Owls property and started renting it last June.”

His parents’ cabin, Elk Ridge, which sleeps up to 10, is marketed with the Hoot Owl cabin on a joint Knotty Poplar Cabins website.

“It’s fun to be a part of helping families and friends to make good memories,” Brooke Owens added.

The company, “Daisy’s Cabins,” was named after the couple’s dog of 16 years, Daisy, a Yorkie, who died three years ago.

“We want to keep growing and to do another cabin,” Owens said.

Owens, who works for the Buchanan County Sheriff’s Department, said he and Brooke, who manages the cabin business and also works as a probation officer with the Virginia Department of Corrections, hope to be able to add two additional employees to the cabin business as it grows in the future.

For additional information about the cabins, interested persons may check out their website at www.knottypoplarcabins.weebly.com which links to Airbnb or their Facebook page by the same name.