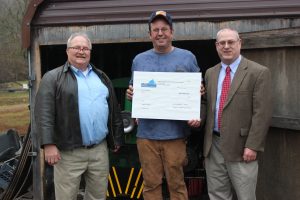 DUNGANNON, VA – MARCH 25, 2020 — It’s not everyone that has a miniature steam railroad on their property, but Dave Powers in Dungannon, Va., has just that. Powers opened D&LP, which stands for “Dave ‘n the Little People,” which when it opens in late summer will offer adults and children alike the opportunity to experience a steam locomotive ride on a miniature scale. D&LP was a recent recipient of a $10,000 Virginia Coalfield Economic Development Authority (VCEDA) seed capital matching grant.

Three hundred tons of gravel, 1,200 railroad ties, another half mile of track and a new steam engine later, Powers hopes to be ready to open at his 4710 Sinking Creek Hwy., Dungannon, Va., location by August 2020. Materials are on site now and the work to get it all in place is underway.

“Assisting entrepreneurs to grow their businesses is what the VCEDA Seed Capital Matching Grant program is all about,” said Jonathan Belcher, VCEDA executive director/general counsel. “D&LP presented a unique business opportunity which also adds to the tourism economy in the region which has been a focus of VCEDA for a number of years.”

“The VCEDA grant really enabled us to get what we needed in order to be able to put the new track down,” Powers said.

Powers has held a lifelong fascination with trains and railroad history and he took that passion to build what he refers to as “a hobby railroad.” Unlike most hobby railroads, however in this case, Powers’ railroad is not on a platform featuring miniature trains snaking their way through a through a miniature town and countryside — although he has one of those too.

Powers’ “hobby railroad” is a bit larger and actually operates on more than a mile of track. He bought used track and laid a half mile of it in 2010, offering free train rides to family and friends. Recently, however, he decided to expand the track and to turn it into a business to offer train rides to adults and children alike and to host special events from birthday parties and family reunions to church gatherings. Additional special events to be offered include school visits and seasonal offerings. He recently purchased a new miniature steam locomotive.

Train rides will be offered on Saturdays and Sundays from May to December. Up to 30 people can ride at one time.

Also on site is a country store, Powers Mill Primitive, which is near the tracks where he runs the locomotive engine and its cars. The store has been open for 10 years. A garage, Powers Garage, is also located on the property. Powers has more than 35 years in automotive repair experience and has operated the garage for the past 26 years. That experience is also valuable when it comes to performing any needed maintenance on the railroad engine.

He added that the folks at Tweetsie Railroad were a big help to him in understanding the steam locomotive engine and how it runs.

In deciding to turn his lifelong passion with trains into a business, Powers added, “I like to do stuff for the community.”

Powers said his love of trains goes back to when he was a child when at the age of three, his father, Robert E. Powers, bought him a ticket to ride on the Clinchfield Railroad to Elkhorn City, Ky.

“The rest is history,” Powers said.

Powers worked with Tim Blankenbecler, of the Small Business Development Center at Mountain Empire Community College, in the development of his business plan and application to VCEDA. The Scott County Economic Development Authority also provided a letter of support for the project.