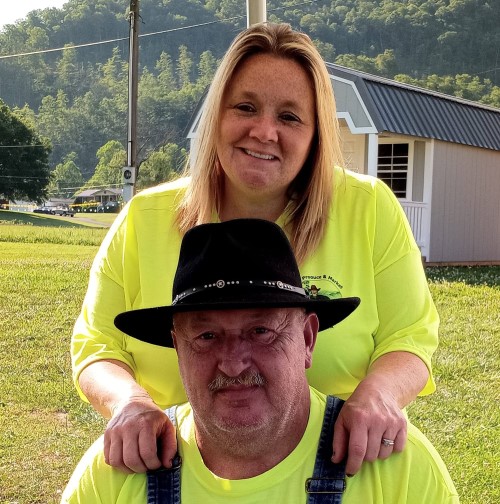 DUFFIELD, VA – SEPTEMBER 7, 2021 — For Henry and Renee Morris, opening Henry’s Produce & Market LLC in Duffield was a way not only to give back to the community they love by giving local farmers a ready outlet for their fresh produce, but it was also a way to honor their family heritage.

Henry’s father, the late Charles Franklin Morris, ran a produce stand from the back of an old station wagon and as a tribute to him, his picture hangs on the wall at the new produce stand the Morris’ opened last year. Henry’s Produce & Market LLC is a recent recipient of a $6,500 Virginia Coalfield Economic Development Authority Seed Capital Matching grant.

“When Henry and Renee Morris opened Henry’s Produce & Market LLC last year, they not only created jobs for the new produce market stand they opened, but it had the ripple effect of assisting local farmers, giving them a place to bring their produce and to market their products,” said VCEDA Executive Director/General Counsel Jonathan Belcher. “It’s created a win-win situation for everyone involved. The business projects six full-time and five part-time jobs within three years.

Henry and Renee decided to open the business last year when Henry lost his job due to COVID-19 cutbacks. He chose to withdraw his retirement money to start the new business with a goal of operating it year-round, making it one of the few produce markets in the region to be open all 12 months of the year.

“I have been in produce since I was 10 years old,” Henry said, referencing how he used to assist his Dad in operating a produce business.

From beans, corn, cabbage and tomatoes to yellow squash, zucchini, potatoes of all kinds, strawberries and apples, there is plenty to choose from at the new market which is open Monday through Saturday, 9 a.m. to 6 p.m. and which also offers local arts and crafts for sale.

Currently, six to seven local farmers supply the bulk of the produce offered for sale at the produce market,  Henry said.

Renee added that nothing goes to waste with any produce not saleable recycled or utilized as animal feed.

This past week, the business officially marked its first year anniversary and has plans to celebrate it in the not too distant future with a customer appreciation day.

The VCEDA grant, Henry said, was both much needed and much appreciated.

“We probably could not have done what we have done without the grant,” Henry said. “It is helping us to grow and making us more accessible. It is a blessing that we got it.”

The Morris’ used the funds to purchase a lighted roadside sign and toward a walk-in cooler, among other things. They are currently extending the front porch and adding a canopy with plans to offer musical “pickin’ on the porch” and story telling nights once a month.

Henry’s Produce & Market LLC worked with the Mountain Empire Community College Small Business Development Center on the development of its business plan and application to VCEDA. The Scott County Economic Development Authority provided a letter of support for the project.

“Henry and Renee have poured their heart into their business,” said Becki O’Quinn, MECC SBDC director.  “It’s been a joy to work with them. The VCEDA seed capital fund gave them a boost to improve their market to better serve their customers.”