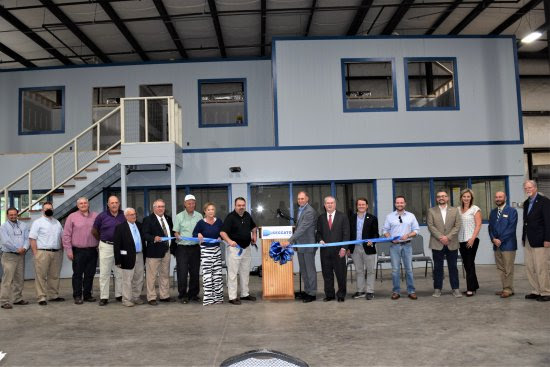 At the ribbon cutting for the Ceccato USA announcement, Jimmy Sisk, Ceccato USA president and CEO, noted an initial capital investment of $1.75 million is projected by the company within the first four months. The parent company, Ceccato S.P.A., was founded in 1936 and is one of the leading Italian manufacturers in the field of washing systems and equipment for all vehicles, from cars to trains. It has a presence in more than 60 countries where it installs Rollover units for car washes, gas stations, and car dealerships as well as conveyor tunnels, self-service systems and train washing units, also offering after-sales support. It also has subsidiaries in Germany and Brazil.

A ribbon-cutting ceremony marking the announcement that Italy-based Ceccato S.P.A. will locate its first United States subsidiary, Ceccato USA Corporation, bringing with it up to 50 new jobs within three to five years in Russell County, Va., was celebrated September 9 at the company’s new location in the Russell Place building.

The announcement that the new company will operate in 51,830 square feet of the Russell Place building at 122 Haber Drive in Lebanon, Va., was celebrated by company representatives, Russell County officials, state and federal representatives and the Virginia Coalfield Economic Development Authority (VCEDA).  VCEDA worked with the Russell County Industrial Development Authority to help Ceccato USA Corporation locate to the Russell Place.

At its new Lebanon, Va., location, initially, the company will assemble and sell car wash units and will also manufacture truck wash units, sourcing items needed to manufacture those from U.S. companies.

“The announcement is another great example of two very important factors in being successful in economic development. First, you must have product to market to prospective companies and the IDA’s decision with help from VCEDA to acquire the building earlier this year was a critical factor in being able to land this project.  Second, economic development requires a team approach of people and organizations working together and this project is another perfect example of that.”

Read more about the Ceccato announcement. 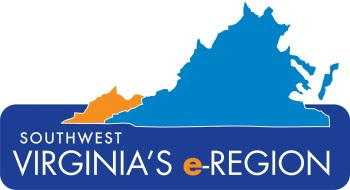 Several loans and grants were approved during a meeting of the Virginia Coalfield Economic Development Authority (VCEDA) board in September in Lebanon.

On the marketing front, Belcher noted in-person outreach activities have resumed as various conferences, trade shows and meetings are now being held again. Additionally, he said, a new “how to apply” seed capital video has been created to assist potential applicants to that program with understanding how the program works.  Belcher also showed the board a new VCEDA ad promoting the region in Virginia Business magazine.

Read more about the VCEDA Board Meeting. 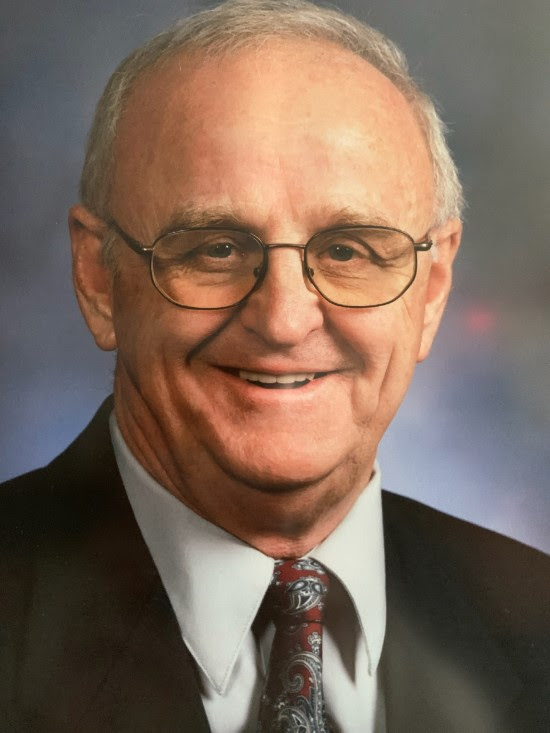 A resolution honoring the service of former VCEDA chairman and long-time board member Donald Baker was adopted by the VCEDA board in September. He died a short time later in early October.

Baker was the only individual to have ever been appointed to the VCEDA board by five different Virginia governors. The resolution commends Baker for his many years of service to the Town of Clintwood, Dickenson County and the entire region. 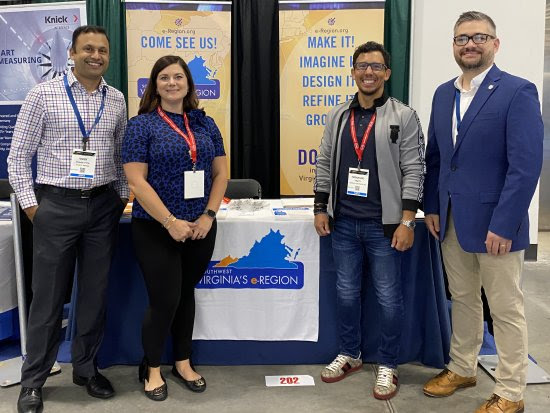 VCEDA was at the Electric Vehicle and Battery Show in Michigan in mid-September with an e-Region exhibit booth designed to educate attendees about the e-Region and what is has to offer.

The e-Region exhibit booth also featured the Energy Storage and Electrification Manufacturing (ESEM) jobs project, a GO Virginia funded initiative of which VCEDA is a part, designed to help promote the region for job creation in those industry sectors.

Billed as the number one electric vehicle and battery event in North America, each year, engineers, innovators and thought leaders converge in Novi, Michigan, for the conference and expo focused on keeping up with the fast-moving advanced battery and automotive industries. This year, more than 10,000 attendees, 550 suppliers and 150 speakers took part in the event. 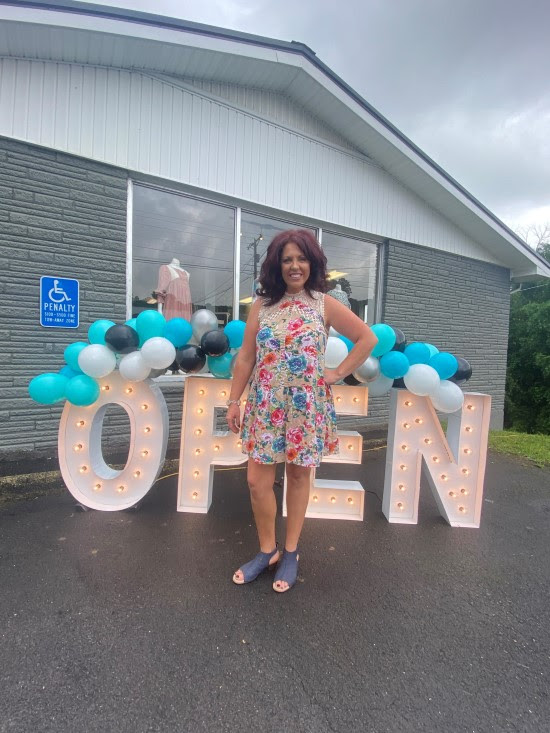 An upscale salon to cater to the hair styling and beauty needs of area women is what Natasha Hughes had in mind when she began planning for her new business, Trendy Belle Salon in Lebanon, Va. With the help of a $6,500 Virginia Coalfield Economic Development Authority (VCEDA) seed capital matching grant, she outfitted the business and officially opened it this past June.

Now, in addition to her, one full-time and one part-time stylist are working in the salon as growing the customer base remains a primary focus.

“Trendy Belle Salon had a plan for growth from the beginning and has already started well on its way to achieving initial goals set to hire two employees within two years.” 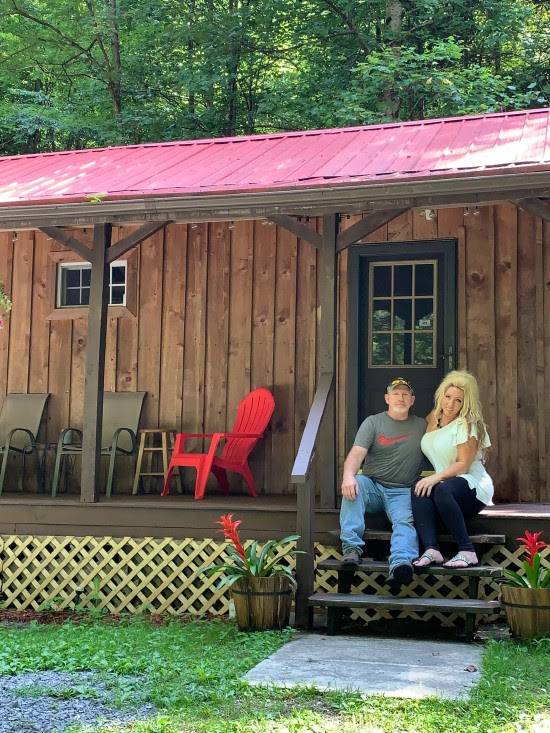 When Raymond and Melissa Webb bought 30 acres of property on Hoot Owl Mountain in Buchanan County, Va., they did so with the intent to develop a cabin rental business and camping location  — Country Road Cabin Rentals LLC — to augment lodging opportunities related to the Spearhead Trails’ Coal Canyon Trail. With ride-out access to the trail and to the town of Grundy, Raymond Webb said recently, they are already seeing a return on their investment as rentals are picking up and the property is becoming known. 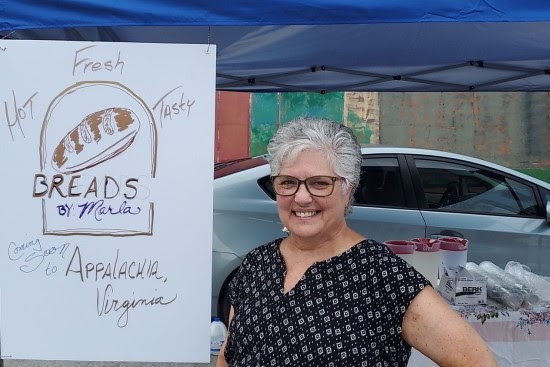 Marla Weitzman’s new business, Breads by Marla, was a recent recipient of a VCEDA seed capital matching grant. Utilizing the grant and other financing, Weitzman has opened a commercial kitchen, enabling her to expand her business and go from selling her breads solely at area farmer’s markets, to working with area restaurants to supply their bread needs.

From quick breads to cinnamon buns, pound cake to pretzels and more, Breads by Marla, operated by Big Stone Gap resident Marla Weitzman, has been a familiar sight at area farmer’s markets in the past, but now, with the help of a $6,500 Virginia Coalfield Economic Development Authority (VCEDA) seed capital matching grant, Breads by Marla is opening a commercial kitchen and supplying area restaurants with the breads Weitzman has become famous for in the region.

“Assisting entrepreneurs to grow their small businesses and to create new jobs is what VCEDA’s seed capital matching grant program is all about. Breads by Marla was already working in the farmer’s market circuit, but had a solid business plan to work with area restaurants and expand to operate a commercial kitchen, in the process projecting to create one full time and three part-time jobs within five years.”

Read more about Breads by Marla. 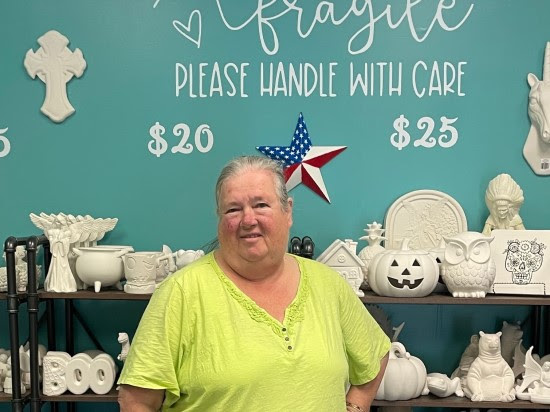 Assisting customers in the exploration of their creative talents and providing them with a ready source of craft supplies for a large variety of crafts was Linda Hamm’s goal as she started her new business, the Craft Connection, LLC.

The new business, which opened in April, is a paint your own pottery shop and also sells craft supplies, vinyl, yarns and thread from its location on 4415 Steelsburg Highway in Cedar Bluff. Craft Connection, LLC was a recent recipient of a $6,500 Virginia Coalfield Economic Development Authority (VCEDA) seed capital matching grant. 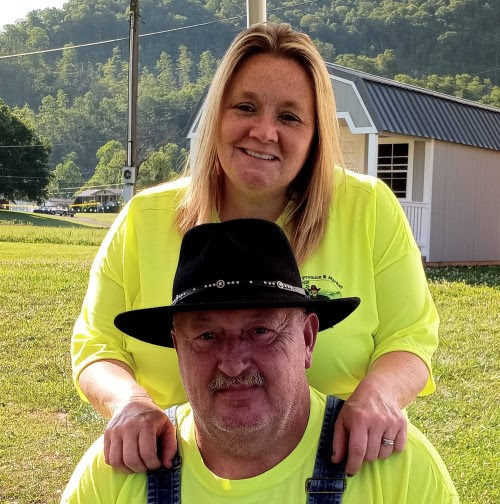 For Henry and Renee Morris, opening Henry’s Produce & Market LLC in Duffield, Va., was a way not only to give back to the community they love by giving local farmers a ready outlet for their fresh produce, but it was also a way to honor their family heritage.

Henry’s father, the late Charles Franklin Morris, ran a produce stand from the back of an old station wagon and as a tribute to him, his picture hangs on the wall at the new produce stand the Morris’ opened last year. Henry’s Produce & Market LLC is a recent recipient of a $6,500 Virginia Coalfield Economic Development Authority Seed Capital Matching grant.

“When Henry and Renee Morris opened Henry’s Produce and Market LLC last year, they not only created jobs for the new produce market stand they opened, but it had the ripple effect of assisting local farmers, giving them a place to bring their produce and to market their products. It’s created a win-win situation for everyone involved. The business projects six full-time and five part-time jobs within three years.