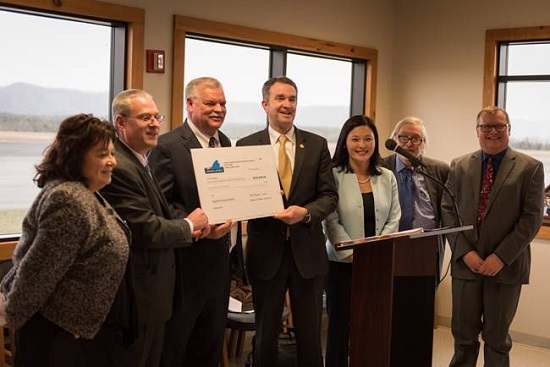 Governor Ralph Northam and Secretary of Commerce and Trade Esther Lee came to the region March 8 to announce that England Furniture, a manufacturer of quality upholstered furniture, will establish a manufacturing operation in the 32,000 sq. ft. Lee County Industrial Building in Dryden, Va. VCEDA approved up to a $350,000 loan to the Lee County Industrial Development Authority to help renovate the building for the project. A loan closing on this VCEDA loan was held  prior to the announcement event.

VCEDA joined Lee County in welcoming the company and local, state and federal officials on and at the Lee County Airport announcement ceremony. England Furniture projects 79 new jobs at the Dryden facility. 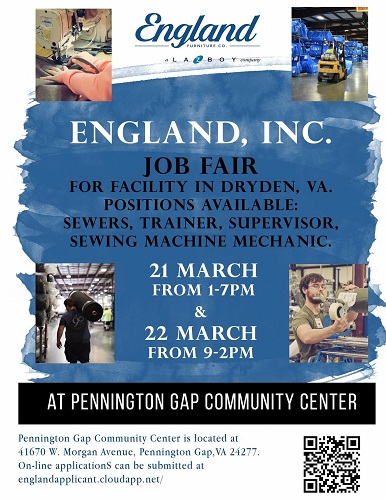 A job fair will be held at the Pennington Gap Community Center on March 21 from 1 p.m. to 7 p.m. and March 22 from 9 a.m. to 2 p.m. Applications can be completed online prior to the job fair at http://englandapplicant.cloudapp.net/

“VCEDA congratulates England Furniture on selecting Lee County for this expansion project which will provide much needed job opportunities for the citizens of Lee County and the region. ”

To read the Governor’s News Release. 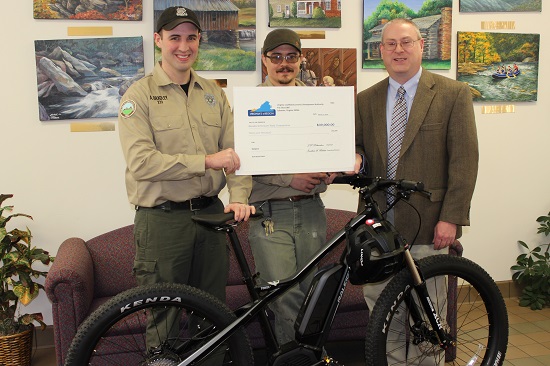 On March 15 VCEDA closed on an up to $39,000 grant to Breaks Interstate Park that will be used to add electric bicycles, mountain bikes and kayaks to the park’s outdoor adventure offerings. The park has purchased three e-bikes and five mountain bikes that will be offered for rent to park visitors. The kayaks will be used to provide excursions on the Russell Fork River. The grant also will be used to help make other improvements to the park’s hotel units. In the photo are, from left, Austin Bradley, Breaks Interstate Park Superintendent; Tim Cleary, Outdoor Adventure supervisor at the park; and Jonathan Belcher, VCEDA Executive Director/General Counsel.

“VCEDA has been a long-standing supporter of the Breaks Interstate Park and has helped to provide funding for a variety of projects at the park from the water park to a zipline and now for the equipment needed to add to the adventure offerings at the park. ”

Read more about the grant to Breaks Interstate Park.

Rural broadband service provider Sunset Digital Communications announced March 14 it will be opening a new branch office in Tazewell, Va., to house support teams for its Virginia customers in the Tazewell, Russell, Buchanan, Wythe and Bland county areas. The new project in Tazewell is expected to create at least 50 new jobs. The announcement was made by Sunset’s Paul and Ryan Elswick at the Tazewell Town Office. Among those offering their congratulations were Tazewell town and county officials and State Sen. Ben Chafin. In 2015, VCEDA approved a $450,000 loan to Sunset Digital Communications to assist the company to expand in the e-Region. VCEDA also helped fund the installation of fiber optic broadband lines in the region. 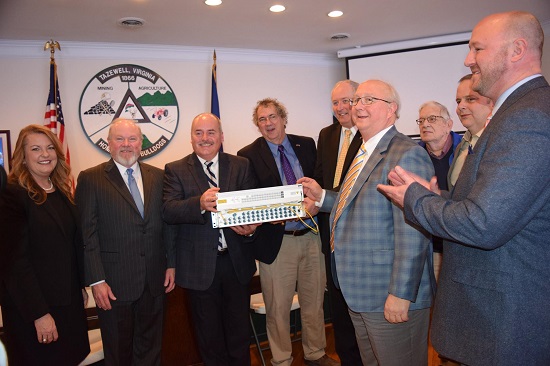