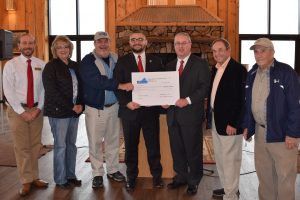 An up to $5.6 million loan from the Virginia Coalfield Economic Development Authority (VCEDA) to the Industrial Development Authority of Buchanan County (IDA) was announced Friday in conjunction with the project. The loan was approved Thursday during a meeting of the VCEDA board in Lebanon.

“Working with existing businesses to grow and to provide jobs is an important component of what the Virginia Coalfield Economic Development Authority does,” said VCEDA Executive Director/General Counsel Jonathan Belcher. “New jobs can come from new companies; or they can come from established businesses already in our Southwest Virginia e-Region communities – either way, it’s a win, especially for the new employees who will be hired as well as the existing employees who will have brand new facilities in which to work. VCEDA was pleased to work with Paul’s Fan Company and the IDA to make this project happen.”

The VCEDA funds will be used to finance the build-out and completion of the industrial shell building for occupancy by Paul’s Fan Company, the construction of an adjacent 29,000 square foot shop building, the purchase of equipment, machinery and tools, other related improvements and costs associated with the project. The company will be investing at least $1.32 million in new equipment in the building in addition to moving equipment from its current location.

The 80,000-square foot shell building is located on an approximately 14.5-acre site. According to the IDA’s application, the company currently has 42 full-time employees and one part-time employee. A total of 44 full-time and two part-time jobs are projected in the first year; 67 full-time and four part-time jobs within five years; and 82 full-time jobs within 10 years. The company’s average full-time wage rate is more than $20 per hour and the company also offers employee benefits including health and dental insurance, 401k and paid vacation, according to the IDA’s application.

VCEDA and the IDA have been working with Paul’s Fan Company on the expansion project for several months. Paul’s Fan Company manufactures fans for both mining and non-mining industries. The company currently operates out of several separate buildings in the Big Rock area, requiring its products to be moved multiple times along the public highways during the manufacturing process.

The expansion to the Southern Gap Industrial Park shell building will improve company logistics and operating efficiencies, helping it to grow and expand in a central manufacturing location.

The construction of the shell building has been financed with up to a $2.08 million loan previously approved by the VCEDA board to the Buchanan County IDA.

“The Paul’s Fans expansion is an ideal opportunity for the Buchanan County IDA to create an anchor employer at Southern Gap’s burgeoning industrial park, as well as to create new, quality jobs in Buchanan County,” said Jay Rife, chairman of the IDA board of directors. “The company has been a mainstay in the Big Rock area of Buchanan County for more than 60 years. We are excited to now watch its continued growth at the Southern Gap location and we appreciate the partnership on this project with both Paul’s Fans and VCEDA.”

“This expansion project to the Southern Gap industrial park is a key move in positioning us for significant growth, particularly in the area of non-mining industrial fans,” said Todd Elswick, president of Paul’s Fan Company. “We appreciate the partnership we have had on this project from VCEDA and the Buchanan County IDA and their willingness to work with us which will allow us to retain and grow our existing workforce.”

Elswick noted an additional benefit to the expansion project involves the improved logistics of its manufacturing processes and improved transportation of its products to and from customers. Access to the new Breaks Regional Airport from Southern Gap, when that project is completed, will be an additional benefit as the company extensively uses general aviation in its business.

Paul’s Fan Company is also planning an additional expansion to a vacant industrial shell building in Lee County, Virginia. Additional information on that project will be announced Monday in Lee County.