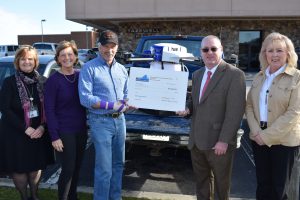 CEDAR BLUFF, VA – November 9, 2018 — Crop dusting has taken a step into the 21st Century with the application of drone technology which Don and Cheryl Nelson are bringing to Southwest Virginia through their new business, Remote Agri Drone LLC.

Remote Agri Drone, based in Cedar Bluff, in Tazewell County, offers agricultural spraying services for controlling plant and brush vegetation, as well as drone services for plant fertilization and soil analysis. By outfitting the drone with cameras, they can also be used in pipeline inspection, electrical power tower/insulators inspection and bridge and structure inspection. Other aerial photography, mapping, surveying and search and rescue services are also available.

“Remote Agri Drone’s business model fit perfectly with VCEDA’s emphasis on locating businesses in the emerging technology field in the coalfield region,” said VCEDA Executive Director/General Counsel Jonathan Belcher. “VCEDA added drones as one of our target industries for development in the region in 2015. Remote Agri Drone is among the first of these type businesses to locate in our region, so VCEDA was pleased to provide this assistance to this new small business.”

Don Nelson notes the need in Southwest Virginia for agricultural spraying services is present. With a drone versus a helicopter or bi-plane spray, the advantage is the ability to refine, control and better direct the spray to targeted areas since the drone can fly much lower than other aircraft.

“The VCEDA seed capital matching grant will enable me to purchase another drone and camera bundle to enable us to expand our business further,” Nelson says.

He recently met with Natural Resource Conservation Services officials, as well as the Department of Game and Inland Fisheries, and has had conversations with both about mapping. Perhaps one of the best applications for the drone, however, he says will be the spraying of fields with liquid calcium which like lime changes the pH level of soil and makes it more conducive to plant growth. Testing in the agriculture field is underway now looking at the benefits of liquid calcium applications, which he says could further grow the business in the future.

Nelson says he has done some spraying with the drone on a test basis for practice, using water to find the ratio of speed per acre application. It’s not all just about buying a drone and launching it.

Nelson earned his drone pilot license this past spring. He completed drone technology courses at Southwest Virginia Community College. He also holds an associate degree in electronics from SWCC and is working now on the second part of his licensing from VADACS.

Getting the drone to fly where he wants involves programming it and the use of a computer which sets up the drone flight path based on the parameters given to it by the operator.

“We are the first business to ask the Charleston FAA to do this,” Nelson says of using the drone for agricultural spray projects.

Just last week, he did a demonstration for farmers at a pasture and grazing seminar held in Thompson Valley in Tazewell.

When asked why he chose to get in the drone business and to pursue it from the agricultural standpoint,  Nelson says his research had shown that farmland was being lost at the rate of 3,000 acres per year due to brush and weeds. If not addressed, based on rising U.S. population, it could mean food shortages by 2025, he adds.

“If I can help recover acreage, that’s the goal,” he says.

Nelson grew up in Tazewell County and opening the business in Tazewell County, he says was important to both him and to his wife. Cheryl works at SWCC and Don is retired from Norfolk Southern Railroad whether he was an electronics specialist, signal tester and signal maintainer. He has also operated a metal and fabrication shop post retirement before deciding to expand into the field of drone usage.