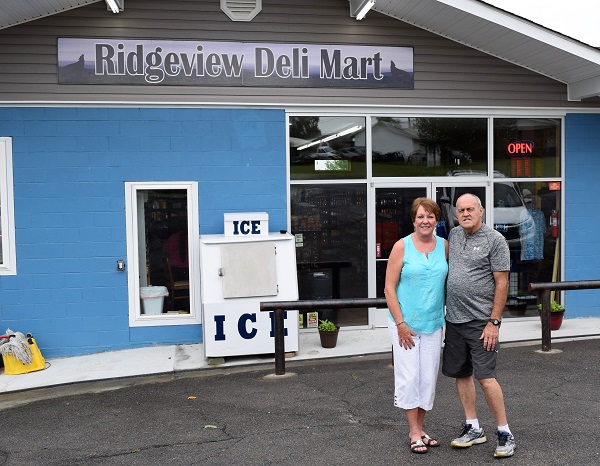 Lebanon, VA (June 30, 2017) — What started out as a body shop in the 1960s and has now been turned into a deli, convenience store and meeting spot, Ridgeview Deli Mart will be one of the first – if not the first Dickenson County business to install solar panels to meet the store’s energy needs.

Larry and Judy Compton began thinking outside the box as they opened the store, located just around the bend from Ridgeview High School on Rose Ridge, two years ago. One of the first things the retired educators began looking at in their new business venture was how to cut their energy costs. It was that thought in mind that led them to look into the option of installing solar roof panels on the store.

The Comptons applied for the grant from VCEDA and learned earlier this month their project was one of five in the region approved for a grant of $15,000. Now, the Comptons said, they have the seed money to leverage other funding to ultimately enable them to install 66 solar roof panels at the store’s location near the new Ridgeview High School.

“We attended a meeting here in Dickenson County about solar panels and heard from a Bristol company at the meeting and started looking into it,” Judy Compton said of solar options.

With electricity bills amounting to $1,200 per month to run the store’s coolers, lights and kitchen, the Comptons noted they were looking at ways to cut costs for the store and learned projections were that installing solar panels could reduce the store’s energy costs by as much as $25,000 in 10 years, at the rate of $2,500 to $3,000 in savings each year.

Judy noted the cost to install is not cheap at an estimated $40,000, which is why the couple began looking for ways to fund the project. Having secured the VCEDA seed capital money, they are now looking into tax credit programs and other options, working with Bristol-based Ecological Energy Systems, to come up with the balance of the funding needed to implement the project. Judy said they hope to be able to construct the project by the end of the year.

“We would like to be a model and support system for any other business in Southwest Virginia who would like to explore solar energy,” Judy Compton said.

The Comptons, both of whom are retired Dickenson County educators – Judy is a retired Dickenson County School superintendent and Larry is a retired principal – decided to open the Ridgeview Deli Mart and Wolfpack Den after their son, Jason, found the location through an auction. With the new Ridgeview school under construction, it seemed the time was right to put in a deli and convenience mart to serve the nearby school. Larry’s parents and grandparents had a combined family history of running grocery/convenience stores of some 75-80 years, so Larry was quick to admit it seemed to be a natural fit when he and Judy decided to convert the old body shop into a store.

They sat down shortly after buying the property to design the store’s interior lay-out and Judy recalled how they laid out the kitchen using construction paper to create their model. They put up walls to separate the space, pressure washed, stained and polished the concrete floor and made space for what they now call the Wolfpack Den – an area with multiple table booths and a screen print shop designing and selling Ridgeview mascot items. The glass cabinet housing the Wolf pack items came from Haysi High School and the shelving on the wall behind was actually used as mailboxes at the old hospital in Clintwood – all a nod to the history of the region and their desire to preserve those elements.

They used reclaimed wood they found in the basement of the building to construct a picnic shed outside the building and set about finding booths, coolers and other items needed to get the store up and running.

Two years later, they employ two full-time employees and up to five others on a part-time basis through the school year. Larry’s brother, Ronnie, helps out and Larry and Judy are also actively involved in running the store. They worked with Nathan Yates to design their website, www.ridgeviewdelimart.com and now take orders and payments on-line. Within five years, their business plan calls for them to employ as many as three full-time employees and seven part-time employees.

In addition to serving as a convenience store for folks on the ridge, the store is also supportive of the Dickenson school system, providing concessions and catering services at various athletic events. This past year, they also catered the Ridgeview school’s prom and routinely deliver orders to the school and bake hundreds of made-to-order pizzas to support various school functions. With specials ranging from MawMaw Ellen’s Chili – a secret family recipe handed down to Larry from his mother, Ellen – to Wednesday specials, fresh hamburgers and baked potatoes, the store is open Monday through Saturday 7 a.m. to 8 p.m. The Wolfpack Den is also available to rent for meetings and events.

“VCEDA was pleased to be able to approve the seed capital funding for the Ridgeview Deli Mart project,” said VCEDA Executive Director Jonathan Belcher, who also serves as the authority’s general counsel. “Their project was innovative in its approach which garnered the attention of the VCEDA board in selecting the Ridgeview project as one of the projects that truly stood out in the authority’s assessment of the applications submitted.”