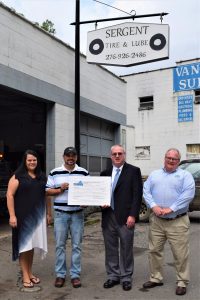 CLINTWOOD, VA – JUNE 24, 2019 – Dickenson and surrounding county residents looking for a place to purchase either new or used tires have an option available to them at Sergent Tire in Clintwood.

“Assisting entrepreneurs in establishing and growing their new businesses is the goal of VCEDA’s Seed Capital Matching Grant program,” said VCEDA Executive Director/General Counsel Jonathan Belcher. “Sergent Tire identified a need in Dickenson County and put into action a plan to develop and grow the business. VCEDA was pleased to assist in its continued growth.”

Sergent Tire officially opened its doors in a two-bay garage being rented from Vanover Supply in May 2018. In addition to new and used tires, the tire shop offers oil, brake, rotor and drum changes, tire mounting, balancing and plugging and other basic automotive services.

Sergent noted the business plans to use the seed capital grant to add a storage building to free up one of the garage bays where used tires are now stored, thereby allowing multiple vehicles to be worked on at the same time. The purchase of additional tools and equipment is another planned use of the grant.

“It has really allowed us to expand and grow,” Sergent said.

Sergent worked with Tim Blankenbecler, of the Small Business Development Center at Mountain Empire Community College, in the development of his business plan and application to VCEDA.

Earlier this year, the tire shop received a Dickenson County Chamber of Commerce “Best of the Best” award.

Sergent’s wife, Hollie takes care of bookkeeping and payroll and his father-in-law, Everett Moore, also helps with the repair work on a part-time basis. Just recently, Sergent noted, the tire shop hired a part-time employee. The business application projected one full-time and one part-time job within a year.

“Sergent Tire caters to a wide variety of customers, including drivers, farmers, machine operators and ATV enthusiasts,” Sergent said. “We offer used tires which allows us to cater to customers who are not able to afford the higher price of new tires.”

Plans for the future include completing the process of becoming a certified Virginia vehicle inspection station.