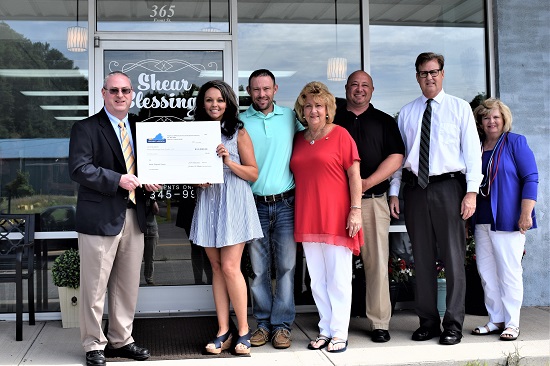 Cedar Bluff, VA (July 5, 2018) –  Twelve years ago Sommer Miner found herself in a predicament. She was living in a homeless shelter, had a young child to care for and was not sure what her next step should be. Through hard work, prayer, study, determination and the support of her family, pastor and her church, City on a Hill, she turned her life around. Earlier this week, she celebrated the grand opening and open house of her new business, Shear Blessings Hair Studio, on Front Street in Cedar Bluff.

Part of what added to that success, she says, was the up to $10,000 seed capital matching grant she received from the Virginia Coalfield Economic Development Authority (VCEDA) to assist her in opening her own business.

“I kept seeing these announcements in the newspaper about businesses getting funds from VCEDA to help them with their start-up and so I applied,” Miner says.

Working with Margie Douglass at the Small Business Development Center at Southwest Virginia Community College and Cameron Forrester, a retired banker and friend who attends church with her and her husband, Robbie, she developed a business plan and completed the successful application to VCEDA.

“Assisting local entrepreneurs in building their businesses and creating jobs is what the VCEDA seed capital matching grant program is all about,” said VCEDA Executive Director/General Counsel Jonathan Belcher. “We were pleased to be able to assist Shear Blessings in its development and already the business has exceeded its initial employment projections.”

“It has really helped me a lot,” Miner says of the seed capital grant, noting the name she chose for the business is based on what she wants it to be.

“I named my salon ‘Shear Blessings Hair Studio’ because I want to be a blessing to my community,” she says.

While initially Miner projected one full-time employee, she also now has three part-time employees and one booth renter at the studio which is a full-service hair salon for men, women and children. In addition to hair styling and coloring services, the business has a Versa Spa spray tanning booth – one of two locations in Tazewell County offering the service with the next closest Versa Spa spray booth being found in Abingdon, she says. She also offers paraffin hand waxing and eyebrow tinting (as a complimentary service). As a hair coloring specialist, she has had extra training with Blondor, Wella, and Milkshake hair colors. A tiltable reclining shampoo bowl adds to client comfort. Three stations are set up and Miner hopes to rent one of those spaces to another stylist and to bring in a nail technician.

She also partners with the Tazewell County Communities and Schools program by doing haircuts for children in the program for free and serves as a mentor in the program as well.

“The VCEDA funds gave me the boost I needed and I wouldn’t have been able to do this without it,” Miner says. “It was such a blessing.”

Getting to where she is today was not easy, she recalls, talking candidly about what led her to the successful opening of her own business and the lessons she learned along the way.

“I was in the drug court program in Tazewell County and it took me three years, but I graduated from it,” she says. “At the time I was living in a homeless shelter, had been to jail, had my first child and then I was saved. God began working on me and making a way for me.”

With God, she says, she was able to turn her life around.

She had taken cosmetology in high school — before she said she made some bad choices and dropped out. She completed her GED and then went through the Department of Rehabilitative Services program offered by Cumberland Mountain Community Services which led to her getting her cosmetology license while working at V&V Restaurant and then her instructor’s license in cosmetology. She worked on commission there for three years before renting a booth at Minerva’s Salon. Raymond and Sherry Shepard, V&V owners, had a salon space coming empty and offered Miner, who at the time was a single mother of two daughters, Cierra, now age 12; and Keyera, now age eight, the opportunity to rent the space and the equipment provided she took care of utilities in the building. She did it for two years and then she felt it was time to go back to school.

Along the way, she married Robbie Miner in 2016.

“I love to learn, so I signed up at SWCC for a business management specialist program. I graduated this past May,” she recalls. “It was the first time I ever got to wear a cap and gown and that made it even more special. The program has really helped me in operating my business.”

The space at 365 Front Street came open at the first of the year and Miner took a leap of faith and in February opened the doors to Shear Blessings.

“I felt like God was moving me to take that next step and so I did,” she says.

Earlier this week, the ribbon was cut and surrounded by family and friends and others in the business community, Miner hosted an open house at the studio.

Shear Blessings is open by appointment only Tuesday through Friday from 9 a.m. to 7 p.m., however walk-ins are welcome for the use of the spray tan booth. On Saturdays, the spray tanning booth is open to walk-ins and by appointment from 9 a.m. to 12 noon. The studio has a Facebook page, Shear Blessings and may also be reached by telephone at 276-345-9904.