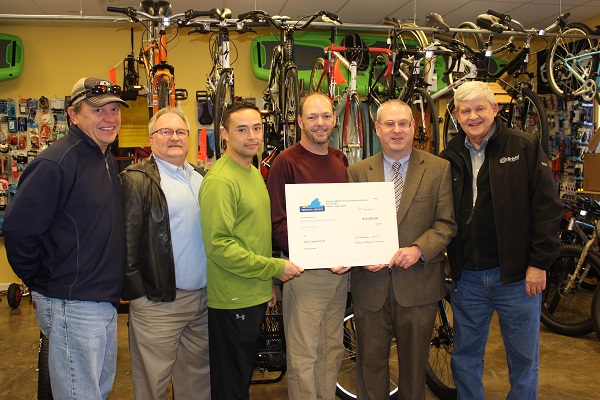 BIG STONE GAP, Va. – December 8, 2017 – A new small business in Wise County is offering battery-powered e-bikes to rent for use on the region’s mountainous biking trails and is a recipient of a $15,000 Seed Capital Matching Grant from a new funding program from the Virginia Coalfield Economic Development Authority (VCEDA).

Southwest Virginia Outdoors, LLC’s co-owners Bobby Bloomer and Lorenzo Rodriguez of Big Stone Gap worked with Tim Blankenbecler, director of the Small Business Development Center at Mountain Empire Community College, to prepare the application to VCEDA for the Seed Capital Matching Grant program. The dollar-for-dollar matching grants in the seed capital program are designed for businesses three years and under with less than 10 full-time employees, and applicants work with the Small Business Development Centers at Mountain Empire and Southwest Virginia community colleges to prepare the applications submitted to VCEDA for consideration.

Bloomer says he and Rodriguez, cyclists themselves, created this new rental e-bike business to take advantage of the interest in cycling and the new trail networks developing in the region.

“Average bike-riding customers are usually in their 40s or older,” says Bloomer, “and mountain bikers are usually younger, but with the e-bikes, once anyone rides them, they love them.”

The e-bikes are good for riding 15-20 miles, depending on how much the rider switches into and out of battery power with a switch on the handlebar.

Bloomer and Rodriguez used the VCEDA Seed Capital Grant to purchase a fleet of e-bikes that they plan to transport to festivals and other special events for rent at biking trails throughout the region. Bloomer says e-bikes are perfect on the region’s mountainous trails because oftentimes cycling is easy going downhill, but with no parking for their vehicles at the bottom, cyclists have to ride back up the hill. Switching on the power makes a great difference, he says.

And not just for riding on the trails, says Rodriguez. “There are two young couples who live here in Big Stone Gap and they ride e-bikes all over town. Once people ride them, they figure out all the things you can do with them.” 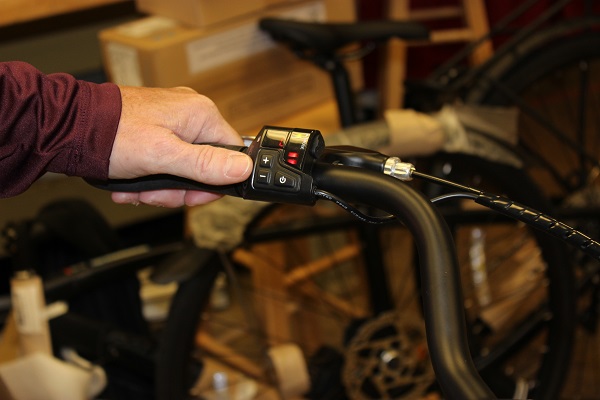 E-bikes are equipped with battery power that can be turned on and off during the ride with a switch on the handlebar.

The pair, also owners of Iron Works Cycling, LLC in Big Stone Gap, met several years ago in a spin class. Bloomer is a native of Wise County and also owns a fitness center. Rodriguez is a fitness trainer and graduate of San Jose State University who moved to the region several years ago with his wife who is a professor at the University of Virginia’s College at Wise.

“With more trails being developed and more interest in cycling in this region, creating the rental e-bike business seemed like a good idea,” says Rodriguez.” And Southwest Virginia Outdoors, LLC is the only business in Southwest Virginia that rents e-bikes, they say.

“E-bikes actually give you more excuses to ride,” says Bloomer. ”You can ride longer and more often with motorized bikes,”

“You look for more excuses to ride instead of not to ride,” says Rodriguez.

“VCEDA recognizes the importance of new small businesses in our overall strategy for helping develop the economy of our region,” said Jonathan Belcher, VCEDA executive director/general counsel.  “We are pleased to present this seed capital grant to Southwest Virginia Outdoors, LLC.  As each new small business is assisted through this initiative, it adds to the economic vitality and diversity of our region.”