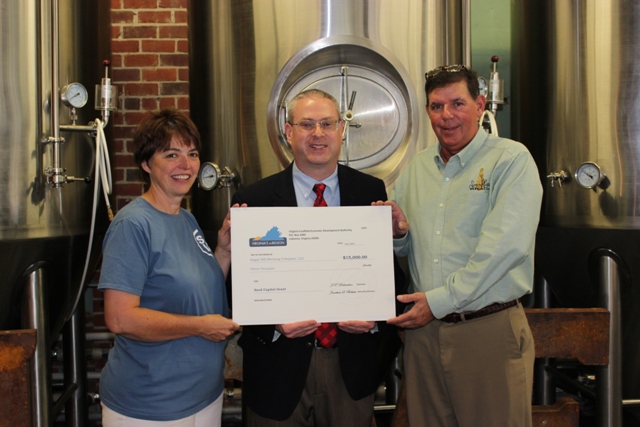 ST. PAUL, Va. – July 14, 2017 – In the beginning, Jennifer and Greg Bailey planned to open a craft brewery in the front half of their hardware store, the part with the street-facing windows around their corner building that was once designated as a fallout shelter.

The idea grew into Sugar Hill Brewing Co. on Broad Street in St. Paul, Va., which opened last September and occupies the entire space of the former hardware store as one of the region’s newest craft breweries. Sugar Hill is one of the five small businesses in the region that received a Seed Capital Matching Grant awarded by the Virginia Coalfield Economic Development Authority (VCEDA) in June. The dollar-for-dollar matching grants up to $15,000 are designed for businesses three years and under with less than 10 full-time employees, and applicants work with the Small Business Development Centers at Mountain Empire and Southwest Virginia community colleges to prepare the applications to VCEDA.

Sugar Hill’s owners worked with Tim Blankenbecler, director of Mountain Empire’s Small Business Development Center, to complete their application to VCEDA. They say their new brewery is a part of this Wise County town’s renaissance with access to a nearby network of ATV trails, new lodging accommodations, a boutique hotel opening in a few months down the street and the restoration plans of the historic Lyric Theater next door. The VCEDA grant will help them, they say, to continue to add to their growing new business.

The Baileys documented their progress developing the brewery on Facebook and had 1,500 followers before they even opened. Open for only 10 months, they say other area restaurants are on a waiting list to offer Sugar Hill beer to their patrons. “Several have been asking for our beer, and we plan within two months to begin working with a distributor that will pick up Sugar Hill’s unique brews and take them to other restaurants throughout the region. That presents another dimension to our business,” said Greg.

Both St. Paul natives, the Baileys got the brewing idea from their son Alex who was a hobby brewer.  “As time went by and our son went to pharmacy school we saw that he wasn’t going to do anything with the brewing idea, we started investigating what it would take to start something like this. We didn’t know anything about it, but we started doing research and asking questions of other brewers.” said Greg.

Greg laughs at a memory of sitting on the front porch talking with his son and his then 20-something friends, who when asked by Greg how much they thought it would cost to start a brewery, said $32,000. Greg laughingly points out a “control panel over there behind one of the tanks that cost $32,000.”

They opened Sept. 2, 2016, and are gaining a reputation in the region as a place to sample a great local beer and delicious food in a quaint little Virginia town that is coming alive as a tourist destination and a gathering place for the locals as well. They put up a map and ask patrons to paste a dot on where they are from, and in only a week saw quite a variety of states and even one from Russia. 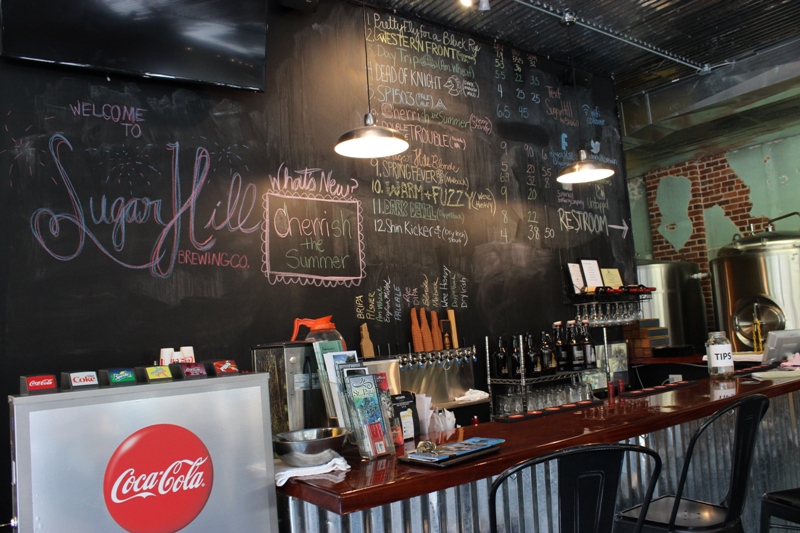 Sugar Hill’s giant chalkboard lists the new craft brewery’s brews and specials and how to contact them on social media.

The unique décor of the former hardware store blends old and new and includes a tin ceiling, exposed brick walls and a giant chalkboard that includes the names of the special brews and information about how to check with various social media channels and texting to learn all about Sugar Hill Brewing.

Brent Dingus, a Castlewood, Va. native, is the Sugar Hill brewer. His experience includes brewing at other breweries and his reputation as a quality inspector in the business. The large chalkboard behind the brewery bar lists the brews, and Dingus helps name them and the descriptions – names such as Dead of Knight (Dark English Mild), Double Double Trouble (Double IPA), and the newest Cherrish the Summer (Cherry Sandy).

“I would love to be able to local source some of the ingredients at some point,” said Dingus as he describes the 120 pounds of fresh cherries it takes for Cherrish, a German style, cherry blend beer.

Sugar Hill is also gaining a reputation for its dining menu. “We were most fortunate to have Carey Watkins as our general manager when we were planning the brewery. Our most popular appetizer, ‘Say Cheese,’ which are fried pimento cheese balls with sweet chili pepper jelly sauce, was her brainchild,” said Jennifer.

Other specialties include Couch Potato – homemade potato chips with dipping sauce – and a variety of burgers, wraps and a Cheeseburger Salad featuring locally sourced hamburger from Gent Farms in Russell County.

“When we were planning Sugar Hill,” said Jennifer, “we wanted it to include a family friendly, sit-down restaurant. We close early, we’re good neighbors, and we’ve had good response from the area.”

She said Sugar Hill is like a spoke in the wheel of the changes and transition taking place in St. Paul. “We felt the town needed it, and it was something within our abilities and that’s why we did it. We’re just one spoke – there’s the Spearhead Trails efforts, new lodging and dining options, the new Western Front Hotel that will open really soon, the restoration of the Lyric Theater – these are all spokes contributing to the change taking place here.” VCEDA is also assisting with funding of the Spearhead Trails network and the Western Front Hotel.

Local history and people are important to the Baileys. They have 20 part-time and two full time employees, and even their logo and the name of the brewery reflect regional character. Sugar Hill is an area at the nearby Clinch River that includes a hiking/biking trail. A brick chimney is all that remains of a house that once stood on Sugar Hill, and the chimney is featured on the Sugar Hill Brewing Co. logo. Coasters at the brewery include the slogan “Brewed with Water from Virginia’s Hidden River – The Clinch.”