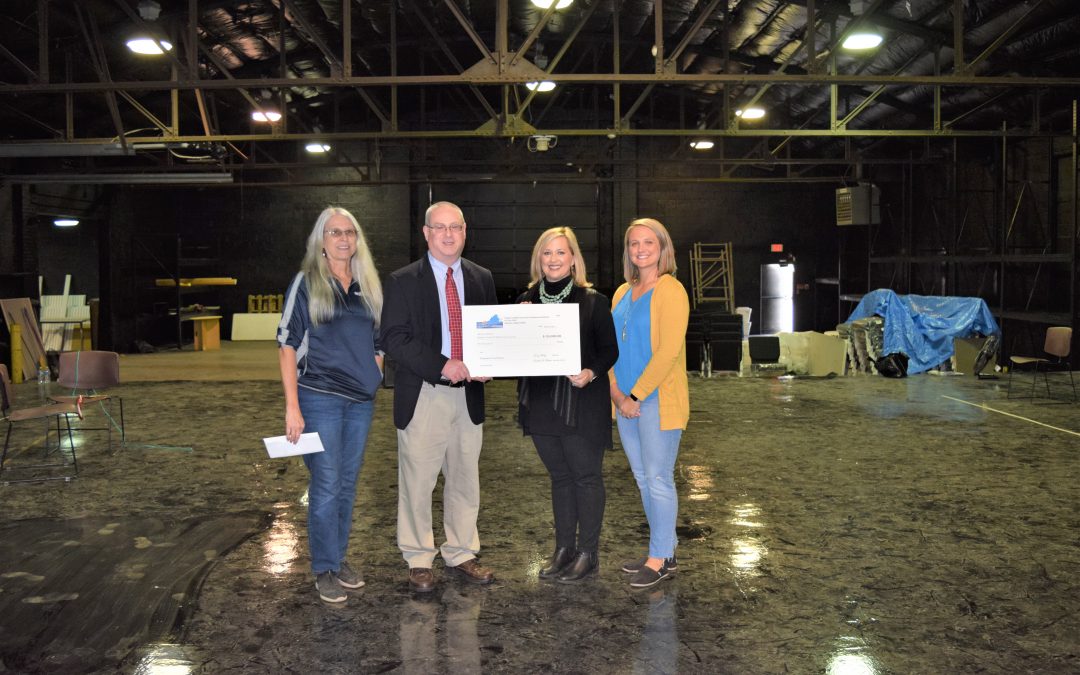 VCEDA Executive Director/General Counsel Jonathan Belcher, presents a ceremonial check representing a $50,000 grant from the authority’s tourism capital improvement matching fund to Theatre Guild of Buchanan County representatives, including, from left, Tina Clevinger, Jodi Reynolds and Jessica Savage. The group is pictured on the stage looking back toward where audience seating will be located. Renovations to the building are now in progress.

The funds are being used by the guild to finance building renovations and improvements, for the purchase of furniture, fixtures and equipment, stage construction, other improvements and engineering expenses to assist with the location of the Theatre Guild to Vansant to the former Coca-Cola bottling facility, which has been renamed by the group as the Community Arts Mainstage (CAM).

The Theatre Guild of Buchanan County was formed in 2016 as a Virginia non-stock corporation and is also a 501c3 non-profit organization.  Its goal is to bring the highest standard of community theatre to the county and to cultivate arts appreciation.

“VCEDA was pleased to assist the Theatre Guild of Buchanan County with its plans to renovate the former Coca-Cola building into a community theatre,” said VCEDA Executive Director/General Counsel Jonathan Belcher. “The VCEDA funding for the project comes from the Tourism Capital Improvement Matching Fund. According to the Theatre Guild’s application, two full time and three to four part-time jobs will be created within five years.”

“The guild could not be more thrilled to be the recipient of this grant,” said Theatre Guild of Buchanan County President Jodi Reynolds. “We have been working diligently for months completing many small projects. With this grant, we will be able to tackle those larger tasks that have been looming over us and check them off our list. We are grateful to everyone in the community who has reached out and offered their help. We’ve seen tremendous support from our membership, our theatre community and Buchanan County as a whole and we are ready to start giving back beginning with our first CAM production of ‘Elf the Musical’ in just a few short weeks.”

Since its inception, the theatre guild has held yearly performances involving both youth and adults in the community. Broadway musicals and plays, including “Alice in Wonderland,” “Annie Jr.,” “Beauty and the Beast,” “A Christmas Carol” and “The Wizard of Oz” have been among the guild’s offerings in the past. Some original productions have also been held. Since 2016, approximately 20 shows with more than 500 performers and cast members have been held.

According to guild officials, at capacity to near capacity crowds have attended the performances, which has seen the guild outgrow the high school auditorium venue. The inability to access the building as needed, no areas for set design and building, inability to have weekday shows due to school schedules, inability to add improvements such as permanent sound and lights, parking issues, etc., caused the guild to begin looking at ways to grow which resulted in it signing a 15-year lease with the option to renew for 10 years on the former Coca-Cola bottling plant at Vansant. 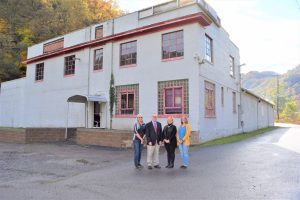 VCEDA Executive Director/General Counsel Jonathan Belcher, second from left, stands with Theatre Guild of Buchanan County representatives, including, from left, Tina Clevinger, Jodi Reynolds and Jessica Savage in front of the guild’s newly acquired building at Vansant – the former Coca Cola bottling plant. The building is undergoing renovations funded in part by a VCEDA $50,000 grant to the guild being used to transform it into the guild’s new Community Arts Mainstage (CAM).

“This beautiful historic building has been vacant for years and will need many improvements to transform it into a community theater,” TGBC officials noted in their application for funding. “However, TGBC has dived headfirst into retrofitting the property and has already made several improvements.”

Already, the seats have been put together, the stage floor refinished, landscaping to remove overgrown bushes and the removal of an old water tank outside have occurred, along with a lot of cleaning on the interior of the building. This week, the stage curtains and stage lights will be installed. Future plans call for the renovation of an upstairs area to be utilized as a gallery display place and meeting space.

The guild also received the donation of shelving, wall display units and dressing rooms from the former Peebles store at Vansant which will be utilized to organize the costume and set room, the lobby and concession area and to provide dressing areas for both male and female cast members.

The first performance at the guild’s new home will be later this month, November 19-20 when “Elf the Musical” comes to the stage at 7 p.m., with an additional performance set November 21 at 2:30 p.m. and an encore performance planned for the following weekend on December 2 at 7 p.m.

The Buchanan County Industrial Development Authority (IDA) provided a letter of support for the VCEDA funding for the project.

“I’m very pleased that the Theatre Guild of Buchanan County was chosen as a recipient of a grant from VCEDA’s Tourism Capital Improvement Matching Fund,” said Buchanan County Marketing and Tourism Director Matt Fields. “The Theatre Guild’s relocation is a wonderful opportunity to not only expand the guild itself, but also to provide a much-needed recreational outlet for the county residents. Jodi Reynolds, Jessica Savage, the theatre guild directors and everyone else involved should be proud of their continued effort to increase access to the arts in Southwest Virginia.”

Membership in the guild is open to all who are interested and willing to subscribe to the general purpose of the organization. For more information on how to get involved, interested persons may contact Tina Clevinger at 276-991-4450.