VCEDA Approves $15 Million for Projects in 2018, Most Active Year in its History 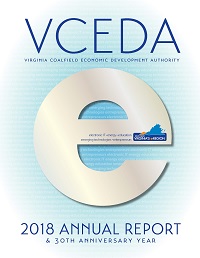 LEBANON, VA – March 8, 2019 – Marking a 30th anniversary, the Virginia Coalfield Economic Development Authority (VCEDA) released its 2018 Annual Report showing approval of $15 million for 45 loans and grants, and reporting 41 new projects and expansions in 2018, the most active year in the organization’s history.

Funding was approved and projects were announced in every county and city in the coalfield region, which includes Buchanan, Dickenson, Lee, Russell, Scott, Tazewell and Wise counties, and the City of Norton. The projects announced are expected to bring more than $9.5 million in private investment and create or retain 1,014 full-time and part-time jobs.

“2018 was a historic year for the Virginia Coalfield Economic Development Authority in many different ways,” said Jonathan Belcher, VCEDA executive director/general counsel. “It marked the 30th anniversary of the organization’s establishment in 1988.  It was the most active year in the history of the organization in terms of new projects and expansions, prospect visits, and the number of loans and grants approved and closed.  It also saw the region’s unemployment rate drop to the lowest level in more than 11 years.”

Some of the projects announced include the Southern Gap Transportation and Logistics Center in Buchanan County, SAIC in Dickenson County, England Furniture in Lee County, TDEC in Russell County, AMR Pemco in Tazewell County, the Mutual Building project in Wise County, and Sugar Hill Cidery in the City of Norton.

In 2018, VCEDA approved 10 loans and 35 grants, and closed eight loans and 38 grants, the highest numbers in VCEDA’s history.  Belcher said funding was approved for projects in every county and city in the region, and projects in Buchanan County were approved for the largest share of this funding, more than $6.7 million.

Belcher said VCEDA’s seed capital matching grant program, implemented in 2017, continued to see great success in 2018. Twenty-four new small businesses were approved for seed capital grants, bringing the total to 35 that have been assisted since 2017. These 35 new small businesses project more than 400 full-time and part-time jobs and more than $2.3 million in private investment.

The 40-page 2018 Annual Report also includes a report by Chmura Economics & Analytics on the economic impact of VCEDA to Southwest Virginia and the state.

“The study by Chmura Economics & Analytics documents the direct, indirect, and induced economic impacts that VCEDA has on Southwest Virginia as well as the state,” said J. P. Richardson, VCEDA chairman. “The report states that in 2018 VCEDA’s total impact in the Commonwealth is estimated to be $7.9 billion supporting 43,753 jobs, and also discusses VCEDA’s important role in diversifying the region’s economy and reducing the region’s unemployment rate.”

The 2018 VCEDA Annual Report is available for download at www.vceda.us.

About Virginia Coalfield Economic Development Authority and Virginia’s e-Region: The Virginia Coalfield Economic Development Authority, created by the Virginia General Assembly in 1988 to enhance and diversify the region’s economy and help create jobs, markets Southwest Virginia’s e-Region and its focus on electronic information technology, energy, education, emerging technologies, and entrepreneurship. VCEDA is a unique economic development organization that manages funds for economic development projects from a percentage of the coal and natural gas severance taxes paid by coal and natural gas companies that operate in the region. Located in southwestern Virginia, the region includes Buchanan, Dickenson, Lee, Russell, Scott, Tazewell, and Wise counties and the City of Norton. www.vceda.us or www.e-Region.org.