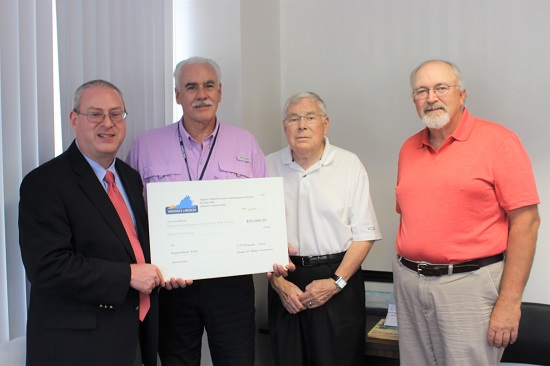 Wise, VA – July 10, 2018 – A $25,000 grant to the Wise County Industrial Development Authority (IDA) for improvements to the Powell River Trail and its trailhead at Appalachia was closed last week by the Virginia Coalfield Economic Development Authority (VCEDA).
The trail is a multi-purpose hiking and biking trail featuring two tunnels and two bridges.

“VCEDA was pleased to be able to assist with improvements to the Powell River Trail and Trailhead utilizing our Tourism Capital Improvement Matching Fund,” said VCEDA Executive Director/General Counsel Jonathan Belcher. “Significant funding from other sources has already been expended on trail development so far and the Wise County IDA has agreed to match the $25,000 being provided by VCEDA.”

“The town of Appalachia, along with a cadre of volunteers with a common goal, has worked diligently in the past several years to transform the abandoned railroad right-of-way into a beautiful scenic walking and bicycle trail along the banks of the Powell River,” said Carl Snodgrass, Wise County economic development director.

“The Wise County Industrial Development Authority recognized the merits of this project and provided the required match for the grant funding from VCEDA that has made possible further development and enhancement of the trailhead,” he added. “The funding enabled the Town of Appalachia to provide for additional parking spaces as well as other amenities that will improve visibility and accessibility for this recreational venue that would otherwise not have been possible without the VCEDA funding.”

The trail, which officially opened October 27, 2017, is also bordered by the Jefferson National Forest.