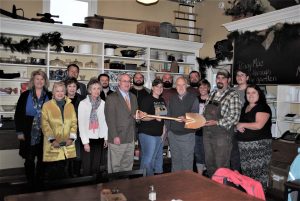 The additional grant funding is being used to make an addition to the building as well as other improvements and repairs to it.

Participants in the groundbreaking held a golden shovel to commemorate the event. Barrett Construction is already underway in making the needed renovations to the space which is located at Fisher & Company Restaurant, just off Rt. 19 across from the museum on the museum property.

“We were pleased to take part in the groundbreaking event last week,” said VCEDA Executive Director/General Counsel Jonathan Belcher. “Helping the tourism venues in Southwest Virginia’s e-Region to grow and to create jobs is what the Tourism Capital Improvement Matching Fund was established to do. The museum, which has been a part of Southwest Virginia since 1978, remains a valuable tourism asset in the region, making it a prime candidate for the Tourism Capital Improvement Matching Fund.”

The Pisgah Store, constructed in 1907, is leased to Fisher & Company, which has successfully operated it as a restaurant for approximately five years.

Last April, the VCEDA Board approved an up to $60,000 grant from the VCEDA Tourism Capital Improvement Matching Fund to the Historic Crab Orchard Museum and Pioneer Park, Inc. to be used to finance building(s) construction, expansion, and rehabilitation, the purchase of furniture, fixtures, and equipment, other improvements and costs, including architectural, engineering, delivery and installation expenses. The additional $50,000 approved for the project brings the total grant funding for it to $110,000.

“We are so grateful to VCEDA and also the Shott Foundation for their support for this project and others at the museum,” said Crab Orchard Museum Executive Director Charlotte Whitted. “Their investment in the museum will pay dividends in our cultural legacy and economic development for years to come.”