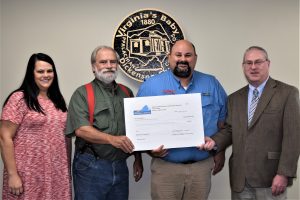 CLINTWOOD, VA – SEPTEMBER 30, 2019 — An up to $149,945 grant to the Southwest Regional Recreation Authority (SRRA) to be used to construct the first phase of a sportsman’s complex in Dickenson County was awarded Thursday by the Virginia Coalfield Economic Development Authority.

The first phase of the project will focus on construction of an archery complex.

“The growing tourism economy in Southwest Virginia is one of the areas VCEDA has assisted in extensively in the past several years,” said VCEDA Executive Director/General Counsel Jonathan Belcher. “This new project by the Southwest Regional Recreation Authority will serve to add to the overall tourism economy in Virginia.”

The Southwest Regional Recreation Authority (“SRRA”) was formed by act of the General Assembly in 2008 for the purpose of establishing and maintaining a Southwest Regional Recreation Area, which was defined as “a system of recreational trails and appurtenant facilities, including trail-head centers, parking areas, camping facilities, picnic areas, recreational areas, historic or cultural interpretive sites, and other facilities that are a part of the system.”

SRRA is best known for its development of the Spearhead Trails’ ATV and multi-use trails in the region.

“SRRA believes it was created to fulfill a broader mission which encompasses all outdoor recreation,” the grant application noted.

In accordance with that goal, SRRA has launched what it refers to as a new non-motorized division and has developed a plan for a new sportsman’s complex to include an archery center, rifle/pistol ranges and shotgun ranges.

As envisioned, SRRA Director Shawn Lindsey said the Spearhead Trails Archery Complex will be part of a larger project encompassing all recreational shooting sports. Multiple ranges will be constructed on an 85-acre site owned by Dickenson County on a site that was once a landfill. The site also has more than 35 acres of woods that an archery trail can be created on to hit up to 40 three-dimensional targets in four zones which include small game animal models with turkey, rabbits and other game models, deer in various positions and western plains animal models like grizzly bears and bison. The project will include picnic areas with fire pits and grills, a restroom and self-pay station. A land use agreement is in place between SRRA and Dickenson County.

The VCEDA funds will be used toward site development, building(s) construction, the installation and/or improvement of trails, roads and utilities, the purchase of equipment, machinery, tools and structures and other improvements, as well as architectural, engineering and permitting costs.

Lindsey noted that SRRA first created trails in the region, but he suggested a piece of the tourism puzzle is finding ways to open the area to new tourists and then once they travel to the region, to keep them in the region longer by having additional offerings.

The overall economic impact of the Sportsman’s Complex, according to Lindsey, is estimated at $3.1 million per year when the full project is completed.