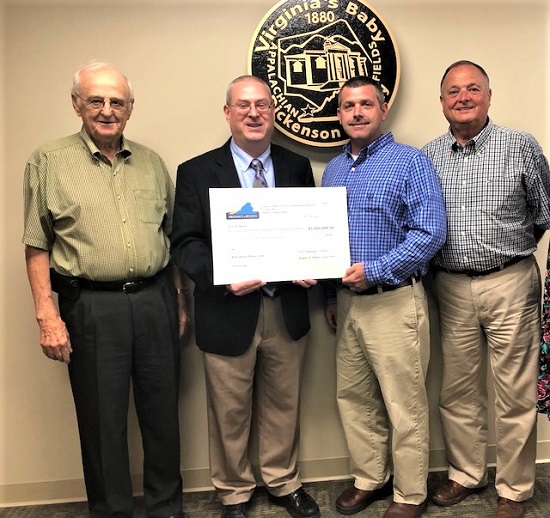 The loan was closed July 18 on an up to $1,004,890 loan to the Dickenson County Industrial Development Authority (IDA) to be used to replace the water line serving Red Onion Industrial Park and the Red Onion State Prison. On hand for the ceremonial check presentation were, from left, Donald Baker, Mayor of the Town of Clintwood; Jonathan Belcher, VCEDA executive director/general counsel; Talbert Bolling, chairman, Dickenson County IDA, and Danny Lambert, secretary/treasurer, Dickenson County IDA.

“Infrastructure is one of the keys to successful economic development and the replacement of the water line which services the Red Onion Industrial Park and the prison is an important part of infrastructure in Dickenson County and a critical need as it relates to the prison which employs a large number of workers, as well as the marketability of the IDA’s Red Onion industrial site,” said VCEDA Executive Director/General Counsel Jonathan Belcher.  “VCEDA is pleased to be able to assist with the project.”