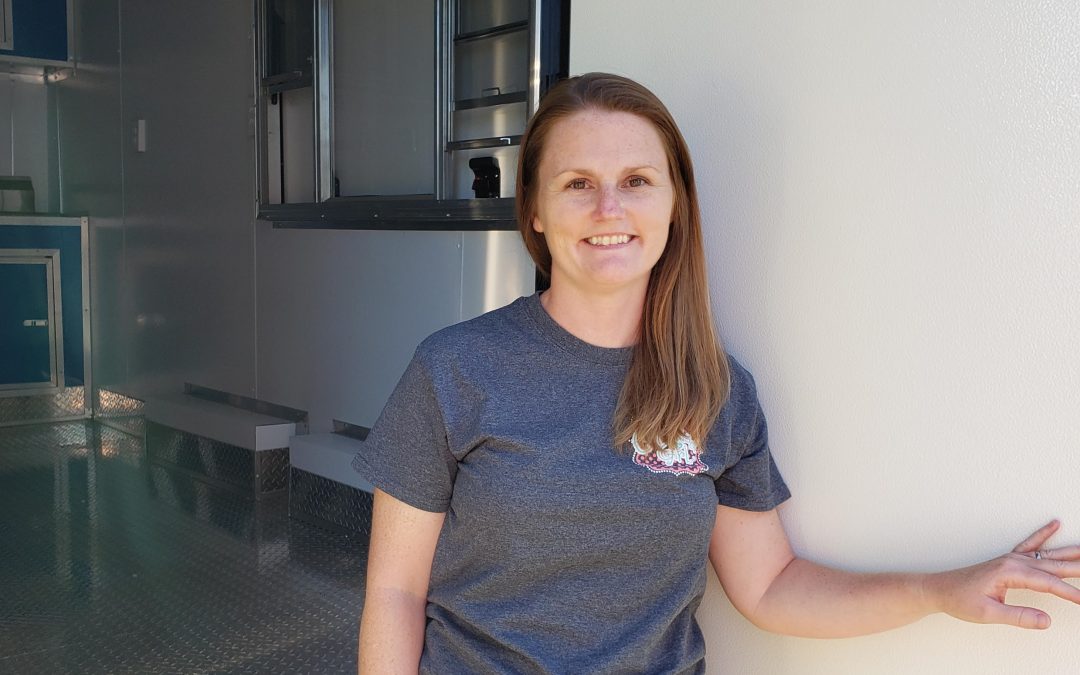 Amber Owens, of Clintwood, looks forward to opening her new business, Country-fied Café, later this month. The mobile food truck arrived earlier this week. Owens is a recent recipient of a $9,000 VCEDA seed capital grant for the new business.

CLINTWOOD, VA — JUNE 30, 2021 — Amber Owens, of Clintwood, always dreamed of opening her own restaurant, even while she has spent her time as a teacher in the public school system. The opening of Country-fied Café in Dickenson County is the realization of that dream as the food truck in which she will begin operating the business arrived this past week.

“VCEDA was pleased to assist Country-fied Café with a seed capital matching grant,” said VCEDA Executive Director/General Counsel Jonathan Belcher. “Helping entrepreneurs to realize their dreams while at the same time creating jobs is one of the benefits of the seed capital program.”

Owens noted the food truck was ordered in February and was delivered on Tuesday of this week.

“We hope to start operations by the end of July,” Owens said.

Now that the truck is here, Owens said time will be spent outfitting it with refrigeration, counter space, a freezer and griddle grill. A generator has already been purchased, as has the equipment needed to outfit it.

“I have always enjoyed cooking,” Owens said of her decision to pursue the new business.

She noted she worked at Cracker Barrel as a cook for two years prior to becoming a teacher. She is currently the librarian at Ridgeview in Dickenson County.

“I’m just a country girl at heart,” Owens said. She grew up in the Haysi area and left for a short period of time before returning home to teach. The decision to open the food truck business, she added is the realization of a long-held dream.

Food fare offered at Country-fied Café will include specials like chicken and dumplings, brown beans, cooked cabbage, fried potatoes and cornbread. The menu will also include wraps, sandwiches, two different types of fries and eventually soups and other light menu fare.

Initially, the focus will be to operate the truck on the weekends in Southwest Virginia locations, but as the business grows, Owens sees it expanding to travel to festivals in Virginia and in neighboring West Virginia and Kentucky.

“I want to represent our area,” Owens said, of the mountain heritage in the region and the cooking that goes with it.

About the Virginia Coalfield Economic Development Authority Seed Capital Matching Grant Fund: VCEDA region for-profit businesses one year and under with less than 10 full-time employees are eligible to apply for dollar-for-dollar matching grants up to $10,000 from the VCEDA Seed Capital Matching Fund. Applicants work with the Small Business Development Centers at Mountain Empire and Southwest Virginia community colleges to prepare the applications to VCEDA that include detailed business and financial plans.