VCEDA joined the Wise County IDA and Mark Gerard, president of DP Facilities, Inc., on April 19 at the Inn at Wise to announce the construction of a Mission Critical Tier III data center in the Lonesome Pine Business & Technology Park in Wise. DP Facilities South, Inc. acquired 22 acres from the Wise County IDA in the park for the project known as Mineral Gap, a Tier III Uptime Institute certified data center. The facility, which is projected to create 40 new jobs with a $65 million investment, is described as one of the most resilient and compromise free data centers in Virginia and the East Coast. 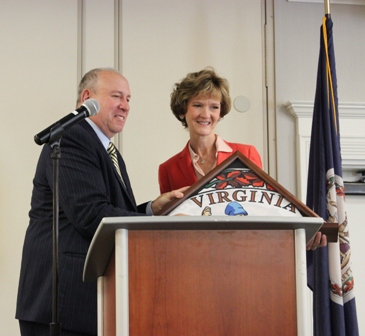 “VCEDA is pleased to congratulate DP Facilities and Wise County on the opening of the Mineral Gap data center. VCEDA helped the Wise County IDA to secure the project by agreeing to allow the land to be provided at no cost,” said Jonathan Belcher, VCEDA executive director/general counsel. This incentive to the company is estimated to be worth at least $1 million.

With this new data center, there are now several data centers operating in the region, which VCEDA markets as Virginia’s e-Region.

Virginia Secretary of Technology Karen Jackson said, “DP Facilities South, Inc.’s decision to locate a Mission Critical Tier III data center in Wise County is great news for Southwest Virginia and for the Commonwealth. Growing the technology based businesses in the Commonwealth, and particularly in rural parts of the state, is key to our efforts to build the New Virginia Economy.” In photo, Secretary Jackson presents the Virginia flag to Mark Gerard.