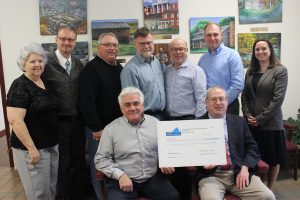 LEBANON, VA – APRIL 11, 2019 — A Canadian-based manufacturer of specialty plastic caps and closures will soon establish its first U.S. manufacturing facility in Russell County, Virginia, creating 48 new jobs within three years and 65 new jobs within five years at the Russell County Shell Building in Lebanon. In the process of establishing a presence in Lebanon, Virginia, the Canadian company will undergo a rebranding of its trade name to Polycap while continuing under the same corporate structure. An up to $3,373,287.00 loan to the Russell County Industrial Development Authority (IDA) was closed recently by the Virginia Coalfield Economic Development Authority (VCEDA) to build out the Russell County shell building for Polycap LLC.

“VCEDA was pleased to assist the Russell County IDA and the Town of Lebanon in recruiting this project to Lebanon,” said Jonathan Belcher, VCEDA executive director/general counsel. “The company will be providing jobs in a diversified manufacturing sector that will add to the excellent base of manufacturing companies already operating in the region, while providing good manufacturing jobs for the citizens of Russell County and the surrounding area.”

Polycap will manufacture specialty plastic caps and closures for the food and beverage, personal care, household, industrial, medical and pharmaceutical industries. The group, based in Toronto, Canada, has more than 50 years of experience as a critical supply chain partner to its major customers.

VCEDA began conversations with the company’s officials in late 2016 and hosted the company on several visits to the area. In early December 2018, the company informed VCEDA it had selected the Lebanon shell building for its U.S. expansion project, choosing the Russell County location over others it was looking at outside of Virginia.

The new plant in Lebanon will become the company’s primary manufacturing facility and its U.S. headquarters.