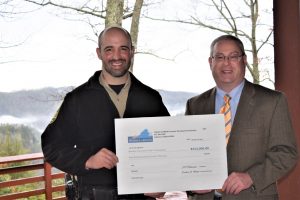 Jonathan Belcher, VCEDA executive director/general counsel, right, presents a ceremonial check to Breaks Interstate Park Superintendent Austin Bradley representing the award of an up to $433,000 grant for improvements at the park, including the construction of a 725-foot pedestrian swinging bridge across the Russell Fork gorge from the Virginia side of the park to the Kentucky side of the park.

BREAKS, VA – DECEMBER 18, 2019 — An up to a $433,000 grant from the Virginia Coalfield Economic Development Authority (VCEDA) to the Breaks Interstate Park to be used for infrastructure and improvements at the park, was closed Monday at the park.

Among the plans for the grant funds is the construction of an approximately 725-foot pedestrian swinging bridge across the Russell Fork gorge from the Virginia side of the park to the Kentucky side of the park. The bridge, when complete, will be the longest pedestrian swinging bridge in North America, according to park officials, who noted the bridge will also connect the park’s trails to the Pine Mountain Trail.

“VCEDA is pleased to continue to support the growth and expansion of the Breaks Interstate Park,” said Jonathan Belcher, VCEDA executive director/general counsel. “The park is a primary tourism asset in Southwest Virginia’s e-Region and VCEDA is pleased to play a part in this latest project.”

In addition to constructing the swinging bridge, the grant funds will also be used for the additional clearing of right of way for electrical infrastructure to serve the park; site preparation and hydroseeding; the transfer of utility lines to new poles and the removal of old poles; the replacement of the roof on a park building; the improvement and/or replacement of the septic system for the Adventure Outpost; structural support improvements for the Laurel Lake cabins; replacement and/or repainting of rusted stairwells; and the purchase of catering equipment.

In addition to VCEDA funds, the park has $326,000.00 in committed funds for the bridge project from several other sources. Once all the funding for the project is in place, construction on the swinging bridge is expected to begin. The timeline calls for construction of the bridge next fall with a planned 2021 opening.

“The Park Commission and staff are extremely excited about the projects which will be made possible by the VCEDA grant, as they will help us continue our efforts to diversify into a national destination for outdoor recreation,” said Breaks Park Superintendent Austin Bradley. “VCEDA’s financial support through the civil penalties grant program has been crucial to our efforts and we are very grateful for its continued support.”