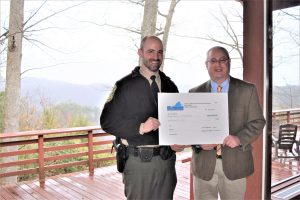 VCEDA Executive Director/General Counsel Jonathan Belcher, right, presents a ceremonial check in the amount of $60,900 to Breaks Interstate Park Superintendent Austin Bradley. The funding is for improvements at the park, including the implementation of a guided rock climbing program.

BREAKS, VA – MARCH 2, 2020 — A new guided rock climbing program planned to start at the beginning of the summer season is among the plans the Breaks Interstate Park has for the use of an up to $60,900 grant from the Virginia Coalfield Economic Development Authority (VCEDA).

“The new grant to the Breaks Park will increase opportunities for employment and enhance the economic base of Dickenson and Buchanan counties and of the Virginia Coalfield Region,” said VCEDA Executive Director/General Counsel Jonathan Belcher. “Its intended use will also help to grow the tourism economy further in the region.”

Multiple beginner-friendly rock climbing routes have been developed at the park and a trained guide has been certified as a climbing guide by the American Mountain Guide Association.

“The park is excited about further expanding its outdoor adventure program to include guided rock climbing and rappelling trips,” said Breaks Interstate Park Superintendent Austin Bradley. “These trips are geared toward novice climbers and are even appropriate for people who are interested in climbing, but who have never found the time to try it. We are very grateful for VCEDA’s continuing support and believe that it will pay big dividends as we continuously seek to redefine ourselves as a national destination for adventure tourism.”

The park plans to use the VCEDA funding in part to purchase additional rock climbing equipment including harnesses, ropes, carabiners and for other associated gear to allow the park to begin leading guided climbing trips.

Additionally, the park plans to use the funding to develop infrastructure and for improvements, including for the purchase of new HVAC units for the Rhododendron Lodge and Conference

Center; and for new washers and dryers servicing the park’s lodging facilities.

According to the application for funding, the park currently has six full-time and 110 part-time employees, and projects the addition of another two full-time and 30 part-time jobs within two years.