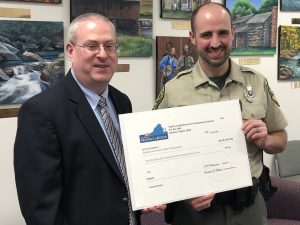 BREAKS, VA – MAY 17, 2019 — An up to a $106,762 grant from the Virginia Coalfield Economic Development Authority (VCEDA) to the Breaks Interstate Park in Buchanan and Dickenson counties was closed Thursday.

“VCEDA is pleased to assist the Breaks Park in these infrastructure improvements,” said VCEDA Executive Director/General Counsel Jonathan Belcher. “The park is one of the premiere tourism assets in Southwest Virginia’s e-Region and adds much to the quality of life offerings found in the region.”

Drainage improvements and the improvement/construction of a connector trail for the equestrian stable operations and the clearing of right of way for electrical infrastructure to serve the park are other planned uses of the funds.

“The most recent improvements which are being funded by the civil penalties fund, which VCEDA maintains for the park, will greatly improve the experience of our guests,” said Breaks Interstate Park Superintendent Austin Bradley. “We are deeply grateful for VCEDA’s continued investment in the park and our region as a whole.”