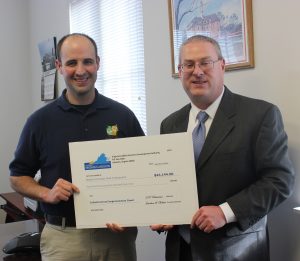 VCEDA Executive Director/General Counsel Jonathan Belcher, right, presents Breaks Interstate Park Superintendent Austin Bradley with a ceremonial check representing a VCEDA grant for up to $43,144 to be used for infrastructure and improvements at the park.

BREAKS, VA – December 19, 2018 — An up to $43,144 grant for infrastructure and improvements at the Breaks Interstate Park was approved and awarded to the park last week by the Virginia Coalfield Economic Development Authority (VCEDA).

The grant will be used to conduct a right of way survey needed in order to complete the transfer of the park’s electrical distribution system to Appalachian Power Company and for a new roof and HVAC system for the park’s adventure outpost building.

“VCEDA is pleased to provide the funds needed to help with infrastructure and additional improvements at the Breaks Interstate Park,” said Jonathan Belcher, VCEDA executive director/general counsel. “The use of the funds to upgrade the park’s outpost building will be an additional enhancement, adding to visitor comfort when checking in for the zipline experience.”

Currently, the park owns and maintains its own electrical distribution lines. It was previously announced by the park and Appalachian Power Company that APCO has agreed to take over the management, maintenance and upgrades needed to the park’s aging electrical system. A right of way survey to complete that transfer is required.

The outpost building, which is where visitors check in for the park’s zipline offering, does not currently have an HVAC system and its roof is in need of repair. Those are the primary upgrades planned to be made with the VCEDA grant.

The funds awarded last week come from civil penalties collected by the Virginia Department of Mines, Minerals and Energy which are transferred under Virginia Code to VCEDA specifically for use at the Breaks Park.

“We are so thankful for VCEDA’s continued support through the civil penalties program,” said Austin Bradley, Breaks Interstate Park superintendent. “This project, along with many others throughout the years, have made the park more sustainable and they are critical in our efforts to reinvent ourselves as a nationally known adventure tourism destination.”