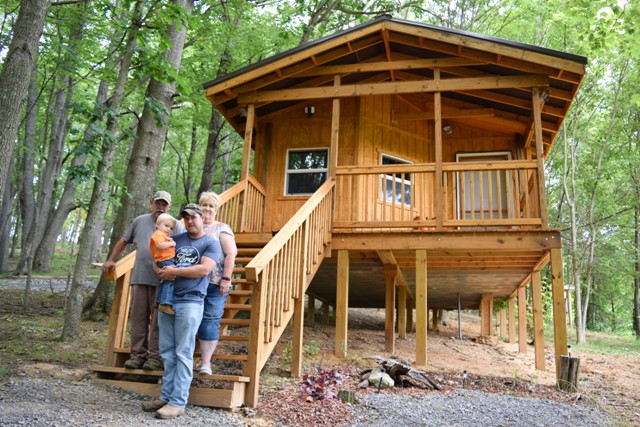 Foxtail Orchards Cabins and Campground owner Matthew Ratliff and son, Andrew; father, Rusty; and mother, Debbie, pause for a photo on the steps leading to the first cabin built on the property, The Fox Den.

Lebanon, VA (July 21, 2017) — For Matthew Ratliff and his family, opening the Foxtail Orchards Cabins and Campground was an idea born one afternoon in 2014 while he was at the Tazewell County property on Rt. 16 that he and his wife, Amy, originally purchased on which to build a house. As Matthew, a former state trooper, saw motorcycle after motorcycle buzz by on the Back of the Dragon motorcycle route which runs through Tazewell County, the idea began to grow to use the property instead as a place to build cabins and to develop a campground to provide lodging for the motorcycle and sports car enthusiasts who frequent the area to ride the roads, as well as for others looking for a quiet getaway in the mountains.

He involved the rest of the family pretty quickly with Mom, Debbie, sitting down to write the business plan and Dad, Rusty, ready to roll up his sleeves and get to work to start building.  In the meantime, they all had day jobs – wife, Amy, worked at the prison as an adult basic education teacher; Rusty also worked at the prison doing building maintenance repair and teaching classes in carpentry and electrical; and Debbie spent and continues to spend much of her time looking after Matthew and Amy’s now almost two-year-old son, Andrew, and currently manages the bookkeeping, grant writing, public relations and housekeeping for the cabins and campground.

“It is truly a family business,” Matthew says.

Foxtail Orchards Cabins and Campground is one of the five small businesses in the region which recently received a Seed Capital Matching Grant awarded by the Virginia Coalfield Economic Development Authority (VCEDA). The dollar-for-dollar matching grants of up to $15,000 are designed for businesses three years and younger with less than 10 full-time employees. Applicants work with the Small Business Development Centers at Mountain Empire and Southwest Virginia community colleges to prepare the applications to VCEDA.

The VCEDA application was one of the funding sources Matthew and the family sought for the project.

“I am so appreciative for everything VCEDA has done,” Matthew says. “The VCEDA funding is what is making it possible for us to start construction on cabin two.”

Sitting at a picnic table in front of the cabin with the heat of the summer sun shaded by the canopy of trees and a light breeze, Matthew talks about building the first cabin and plans for additional growth.

“Cabin Cat,” a black and white neighbor cat who often visits the cabin and those who rent it, stretches lazily on a nearby picnic table as Matthew recalls the work of building the first cabin. He says he found out quickly what a lot of work there was to construction. Rusty has a contractor’s license and certifications in HVAC as well as electrical and Matthew is quick to point out there is nothing in the building spectrum that his father cannot do. His brother, Paul came in from Arizona and helped on the building of the first cabin as did his father-in-law, Ray Johnson. Together, they built it from the ground up.

“There really is nothing like building it for yourself,” Matthew says, describing the satisfaction he felt when the job was finished.

Matthew designed his own website for the business and also designed the logo which features – fittingly – an apple and a fox.

“The property has three well-defined orchards on it and 82 apple trees,” Matthew says of the reasoning for orchards in the name.

Of the rest of the name, he says it comes from long-time friend, Andrew Fox, for whom his son is named, and who like Matthew was a state trooper until he was killed in the line of duty in 2012. Matthew was with him when it happened and it was Fox who trained Matthew as he became a state trooper.

“This was one way to honor his memory,” Matthew says of his friend and former mentor and colleague.

The first cabin, named the “Fox Den,” contains photos of the late Andrew Fox, a Tazewell native, and his story.  The cabin features a Detroit Lions shower curtain in the bathroom, another tip of the hat to Fox’s favorite sports team and the blue and grey décor is a nod to Andrew’s state trooper colors.

As the other cabins are built, Matthew says he plans to honor other fallen law enforcement or military heroes who hailed from Tazewell. Cabin Two will be named after Brandon Asbury, a U.S. Army sergeant who was killed in Afghanistan; and Cabin Three will be named after Shawn Hess, a Tazewell County deputy killed in a crash. The families will be the ones to officially name those cabins and will serve as advisors on the décor.

The first cabin was officially opened in June 2016 and now has return visitors coming back to stay. In addition to those from out of town, Matthew says some “staycationers” have also made the cabin a place to visit.

Site clearing is underway for the second cabin and Matthew and the family also have plans for tent sites and two RV sites in the future.

“We are so appreciative of everything VCEDA has done and that others have done along the way to help us,” Matthew says.

For more information about Foxtail Orchards Cabins and Campgrounds, located just off Rt. 16 on 148 Macky Lane, Tazewell, interested persons may visit www.foxtailorchards.com, look them up on Facebook or call 276-200-4176. 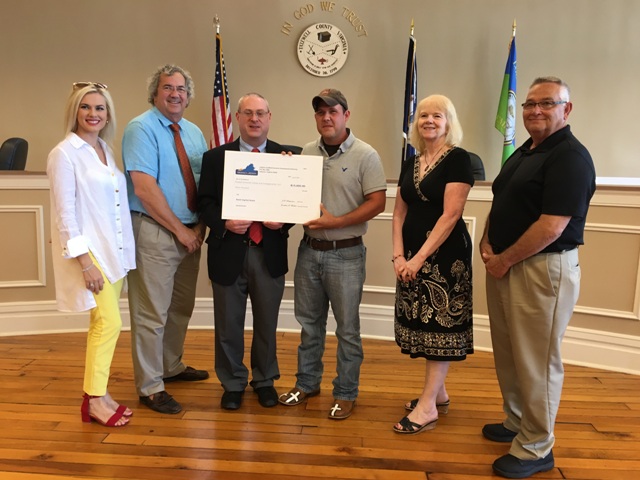