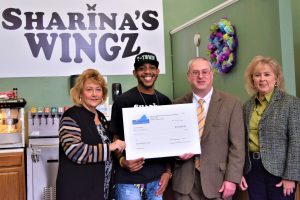 TAZEWELL, VA – December 26, 2018 — Cousins Derek Pridgen and Terrence McDonald used to talk about opening their own business — about opening a sports bar in Tazewell, Va., where they both grew up — a place where locals and tourists alike could drop by and meet friends, enjoy some good food and maybe watch a little football.

That dream became reality when Pridgen and McDonald opened Sharina’s Wingz and began serving a variety of chicken wings as their specialty. In so doing, McDonald said, they became the only wings place for quite some distance. Sharina’s Wingz was a recent recipient of a $10,000 seed capital matching grant from the Virginia Coalfield Economic Development Authority (VCEDA).

“Helping local entrepreneurs to get their start is part of what the VCEDA seed capital matching grant program is all about,” said VCEDA Executive Director/General Counsel Jonathan Belcher. “Sharina’s Wingz presented a business plan to develop and implement their business to take advantage of local needs and a growing tourism economy in Tazewell.”

They worked with Margie Douglass at the Small Business Development Center at Southwest Virginia Community College to develop their business plan and application to VCEDA for funding.

“VCEDA helped us a lot with purchasing inventory and with some of the equipment we needed,” McDonald said.

“It feels really good to have realized this dream,” Pridgen said. “We get to see a lot of people we haven’t seen in years and there have been several who came in and just couldn’t believe we had a place like this in Tazewell.”

Sharina’s Wingz is located on 171 Main Street in downtown Tazewell in the building that used to serve as the Tazewell street car trolley office and later as the Main Street Café. The building was the first building in town to have electricity and an ice machine. A gold tin ceiling remains in place and adds to the atmosphere inside the new restaurant, as do the large plate glass bow windows overlooking Main Street.

The business has applied for its ABC license and hopes to begin selling craft beers by the first of the year. A new bar area is under construction at the back of the building and already, is being stocked with glassware.

Why open a restaurant?

Pridgen and McDonald agreed the answer to that question was simple.

In fact, McDonald added, every Sunday is like Thanksgiving in terms of what is put on the table.

“Mom is known for her cooking skills,” McDonald said of his mother, Eva, who is the chief cook at Sharina’s Wingz which was named in honor of his late sister.

In addition to its normal menu fair, a special is now offered at the restaurant on Sundays which mirrors an old-fashioned home-cooked meal, Pridgen said. One week it was meat loaf; another, pork tenderloin; and on another, a fish fry.

Homemade soups are offered every day and a variety of appetizers which include nachos, chicken alfredo nachos, chips and salsa, jalapeno poppers, mozzarella sticks and fried pickles are on the menu, in addition to their signature wings varieties – bone-in or boneless — including Jamaican Jerk, Honey Mustard, Teriyaki, Garlic Parmesan, Sweet and Spicy, Thai Chili and Barbecue.

And in case that’s not enough, there are several salad options, as well as burgers, club sandwiches and BLT’s on the menus.

Currently, the business employs 15, including six full-time and nine, who are part-time.