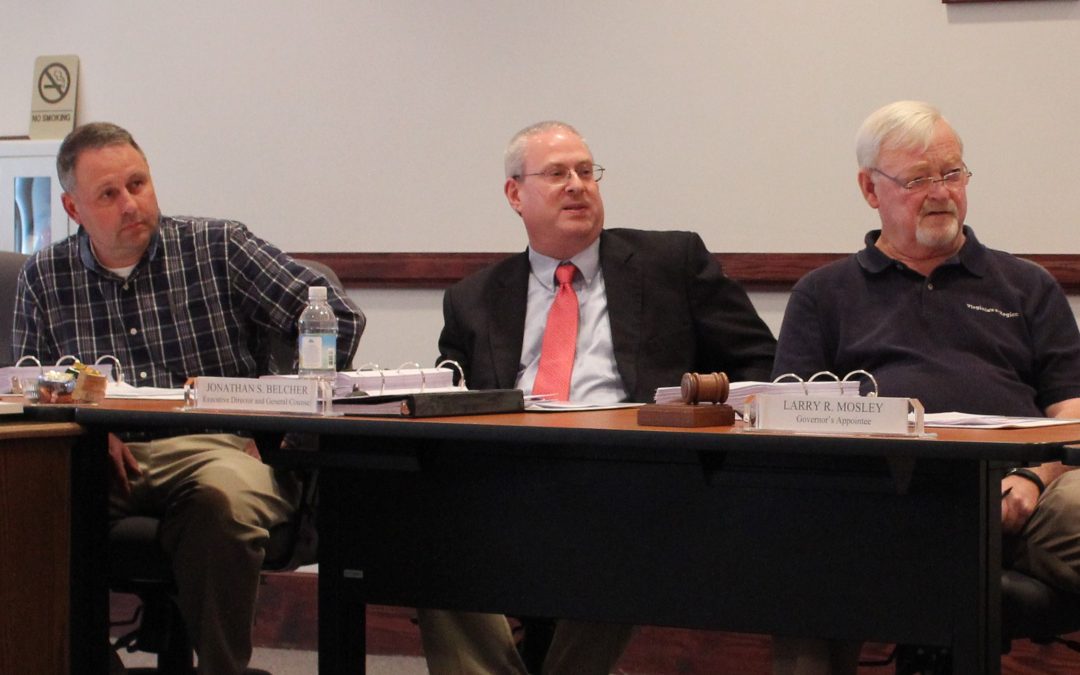 LEBANON, VA – SEPTEMBER 15, 2022 – Two loans and two grants were approved Thursday during a meeting of the Virginia Coalfield Economic Development Authority (VCEDA) board in Lebanon. So far this year, the VCEDA board has approved 28 loans and grants for $8.7 million in new funding projected to help create 203 full-time and 94 part-time jobs and more than $3.9 million in private investment.

Project activity, he said, continues to be high, with 58 active projects currently being pursued. Additionally, he said, so far this year, VCEDA has completed 17 outreach marketing events across the United States.

At Thursday’s meeting, an up to a $400,000 loan to the Tazewell County Industrial Development Authority to be used to finance building construction, renovations and improvements at the former Raven Elementary 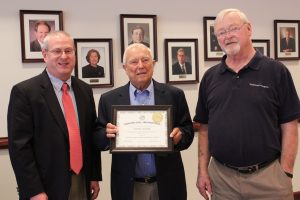 Joe Gillespie, center, was presented with a certificate of recognition honoring him upon his retirement from the Virginia Economic Development Partnership. The recognition came during Thursday’s meeting of the VCEDA board in Lebanon. He is pictured with Jonathan Belcher, left, VCEDA executive director/general counsel; and Larry Mosley, right, VCEDA chairman.

School and site was approved. The funds will be used to assist with the location of a pending job-creating project which will be announced soon.

In other business, the board approved an up to $350,000 loan to be used to finance site development, building demolition, building construction and improvements for the continued development of the Russell County IDA’s Russell Place property.

With the assistance of a previous $900,000 loan from VCEDA, the Russell County IDA purchased and partially renovated the Russell Place, which was a vacant industrial building and approximately 12.6-acre site in downtown Lebanon. As part of the renovations, demolition work on some older sections of the building which were in poor condition, began.  With the need for additional industrial buildings in the region, the IDA decided it would be best to plan to construct a new industrial shell building on the concrete pad where the part of the property being demolished was formerly located.  However, prior to the IDA seeking funding for a new shell building, additional work needs to be done to prepare the property.

The VCEDA board also approved an up to $232,500 grant from the VCEDA Education and Telehealth Access Fund to be used to finance the provision of low earth orbit space-based broadband to unserved and/or underserved children living in an additional 94 residences in Wise County. The grant will be used for the purpose of expanding education and telehealth access in Wise County.

VCEDA was appropriated $500,000 in the Virginia state budget for FY2023 and $500,000.00 in FY2024 “for initiatives intended to expand education and telehealth access.”  Previously, in FY2022, VCEDA also received $500,000 for that purpose.  At the April 15, 2021 VCEDA board meeting, the VCEDA Board adopted formal policies for the administration of the funds being received from the state, by forming the VCEDA Education and Telehealth Access Fund.

The application indicated potential benefits of the project are many, including enhanced educational opportunities, health treatment expansion including improved telemedicine and enhanced workforce education and remote worker (telework) opportunities.

Also approved was an up to $80,000 grant from the VCEDA Civil Penalties Fund to be used to develop infrastructure and improvements at the Breaks Interstate Park, specifically the replacement of the roof and gutters at the park’s Visitor Center and costs associated therewith. The roof was last replaced more than 30 years ago and is beginning to leak due to normal deterioration of the shingles.

The board also heard a presentation from the Virginia Tech Center for Economic and Community Engagement which has been assisting VCEDA in the development of a new targeted industry strategic analysis for the region. Specifically, the report identifies advanced manufacturing, electronic information technology, energy related enterprises and creative tourism as target sectors.

At Thursday’s meeting, the board also: