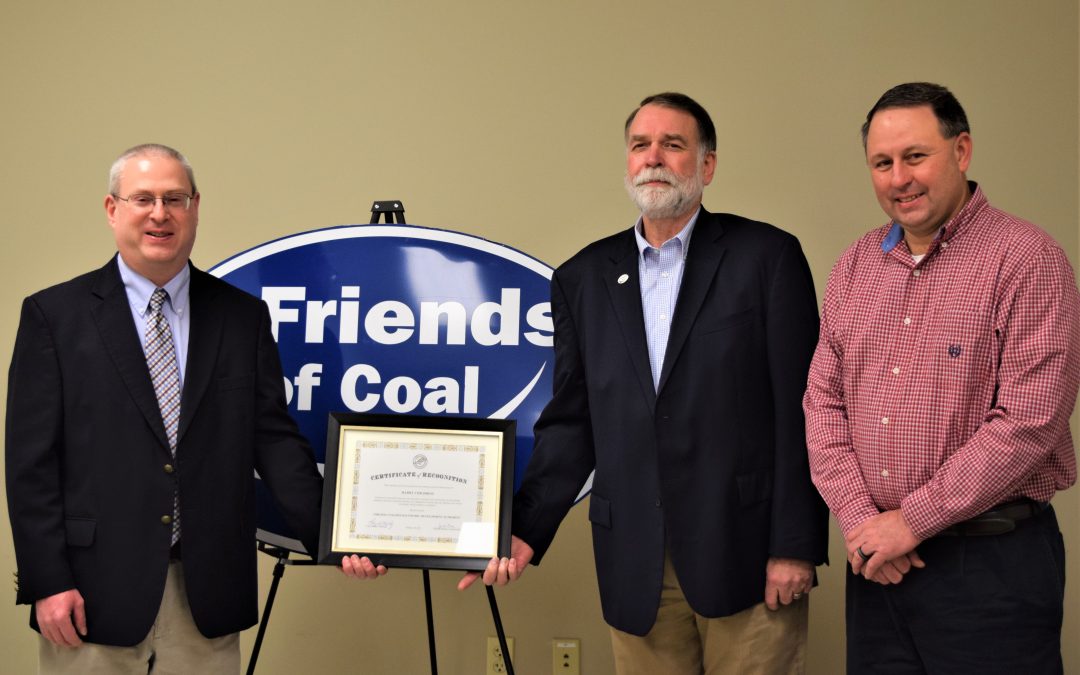 Harry Childress, center, is presented with a certificate of appreciation for his service to the VCEDA board by VCEDA Executive Director/General Counsel Jonathan Belcher, left; and VCEDA Executive Committee Chairman and past VCEDA Board Chairman J.P. Richardson, right.

LEBANON, VA – FEBRUARY 18, 2021 — Outgoing Virginia Coalfield Economic Development Authority (VCEDA) board member Harry Childress was recognized for his service to the VCEDA board and Southwest Virginia during  Thursday’s meeting of the board.

Childress, whose most recent service on the VCEDA board spanned from 2016-2020 as a representative of the Virginia Coal and Energy Alliance, was presented with a framed certificate of appreciation, recognizing him for “his outstanding service and genuine concern for the people of Southwest Virginia and the Coalfield Region.”

In addition to his most recent service on the board, Childress also served from 2008 to 2011 as the representative on the VCEDA board for one of the top three coal producers in the region at that time. He was president of the coal and energy alliance from 2014 to 2020 and in 2021 became president of the new Metallurgical Coal Producers Association (MCPA). He is retiring next month from the coal association post. Barbara Altizer, MCPA executive director of education and outreach, succeeds Childress on the VCEDA board.

During his career, Childress served as chief of the Virginia Division of Mines for 12 years where he managed and directed mine safety programs for the Commonwealth of Virginia and was involved in interpreting laws, regulations, policies and procedures. In addition to his service on the VCEDA board, he has also served the people of Southwest Virginia on the Virginia Coal and Energy Commission, the Virginia Coal Mine Safety Board, the Virginia Board of Coal Mining Examiners and the Coalfield Water Development Fund Board. He has also served on several National Mining Association committees; on various committees for the MCPA and the VCEA; and on the Lonesome Pine Chapter of Holmes Safety Association.

Following the presentation to Childress, the board approved a variety of other project requests and actions.

The board also approved a semi-annual application deadline for VCEDA’s new Renewable Energy Fund. The first round of applications will be due no later than August 10. The renewable energy fund program is designed to encourage new jobs and investment in the region from the renewable energy sector.

Among the projects approved by the board were as follows: