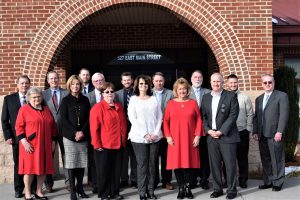 Celebrating its 30th anniversary, the Virginia Coalfield Economic Development Authority (VCEDA) held a special event following its December 13 board meeting and released the results of a study showing the total annual economic impact of VCEDA is estimated to be $6.9 billion in 2018 supporting 37,311 jobs in Southwest Virginia. The study also illustrates efforts by VCEDA “have greatly accelerated diversification in the region,” and that without the jobs attracted to the region by VCEDA, the region’s unemployment rate would be more than three times higher.

The report, prepared by Chmura Economics & Analytics of Richmond, Va., notes all eight localities covered by VCEDA have benefited from VCEDA’s job creation efforts.  The report documents that since VCEDA’s creation in 1988, more than 23,000 direct jobs have been attracted to the region. 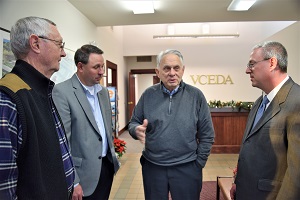 In 2018, VCEDA reported 41 new projects and expansions in the region, the most in VCEDA’s 30-year history. Those projects are projected to create 1,008 full-time and part-time jobs and private investment of nearly $10 million.  In 2018, VCEDA also approved 10 loans and 35 grants, the most in any year of the organization’s 30 years in existence. (In photo, from left, Charles Yates, VCEDA’s first executive director, J.P. Richardson, VCEDA chairman; former Delegate Ford Quillen who introduced legislation in 1988 to create VCEDA; and Jonathan Belcher, VCEDA executive director/general counsel.)

The total amount of funding approved in 2018 was more than $15 million.  Projects were announced and funding was approved this year in every county and city in the VCEDA region.

At the anniversary event, the region’s state legislators were presented with certificates noting their “outstanding service and genuine concern for the people of Southwest Virginia and the Coalfield Region in their tireless efforts in support of the region and its economic development.”  These were awarded to state senators Bill Carrico and Ben Chafin and state delegates Terry Kilgore, Will Morefield, Israel O’Quinn and Todd Pillion.

Special guests at the 30th anniversary event included former state delegate Ford Quillen, who was recognized for his role in the founding of VCEDA in 1988, and Charles Yates, VCEDA’s first executive director. 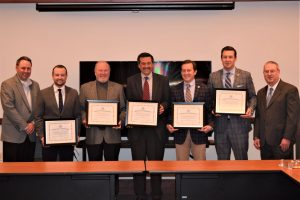 “The success that VCEDA has enjoyed would not have been possible without a team approach and without the support of a whole host of allies including elected officials, economic developers, educational institutions, localities, industrial development authorities, private businesses including the coal and natural gas industries, and many, many others. And that has been and will continue to be the

Read more about the Chmura study and VCEDA’s 30th anniversary.

Showcasing the beauty and landscapes of Southwest Virginia was a motivating factor for Dickenson County native Brad Deel to establish a new business in the region that is one of the latest recipients of a seed capital matching grant from VCEDA.

Created in June, Brad Deel Drone Photography and Videography, LLC is one of three new drone-related

businesses starting up in the region that recently received a $10,000 seed capital matching grant from VCEDA.

With the closing of a major retail store in the Tazewell area earlier this year, Sharon and John Thomas saw a void that perhaps they could help to fill and with the assistance of a $10,000 seed capital matching grant from the Virginia Coalfield Economic Development Authority (VCEDA), she opened Bargain Mart LLC. 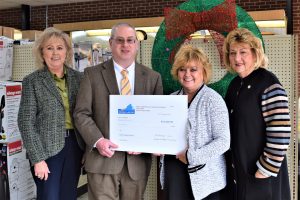 A recent VCEDA seed capital matching grant awarded to Tazewell Co. Mercantile LLC in Richlands has made a difference, according to Bond Strong, its owner, who says, “it’s meant growth and that I can keep dreaming and not just stay in one spot.” 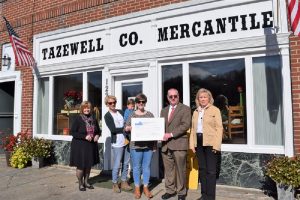 The Tazewell Co. Mercantile offers locally sourced foods, gift items including candles, quilts and crafts, custom gift baskets and antiques. It opened in October when Strong and her

mother, Virginia Warner, decided to combine their dreams with Warner’s antiques offered for sale in the store

Describing himself as a man of faith, Tim Whited, 36, of Honaker says his new company, Praise Aeronautics LLC, is a prayer answered and a dream. Formed in March by the Russell County native, his company offers drone operations such as data acquisition for infrastructure inspection, agriculture and other services and is a recent recipient of an up to $10,000 Virginia Coalfield Economic Development Authority (VCEDA) seed capital matching grant. 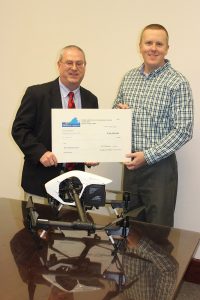 “Drone technology is really still in infancy, and everyone is looking for more and more applications for using drones,” said Whited. “My business plan helped open my eyes on what the business can do and what it can become.” 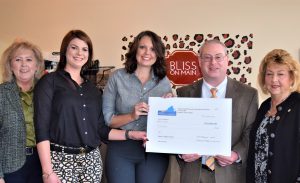 What first started as a customer-client relationship for Amanda Hoops and Amanda Wright, both of Tazewell, turned into a 50-50 business partnership when the two decided to open Bliss on Main, a boutique clothing store in downtown Tazewell.

A $10,000 seed capital grant they recently received from the Virginia Coalfield Economic Development Authority (VCEDA) enabled them to expand their clothing line offerings and will also be utilized to cut through a wall in the store space on 145 Main Street to enlarge the interior of the shop.

Read more about Bliss on Main.