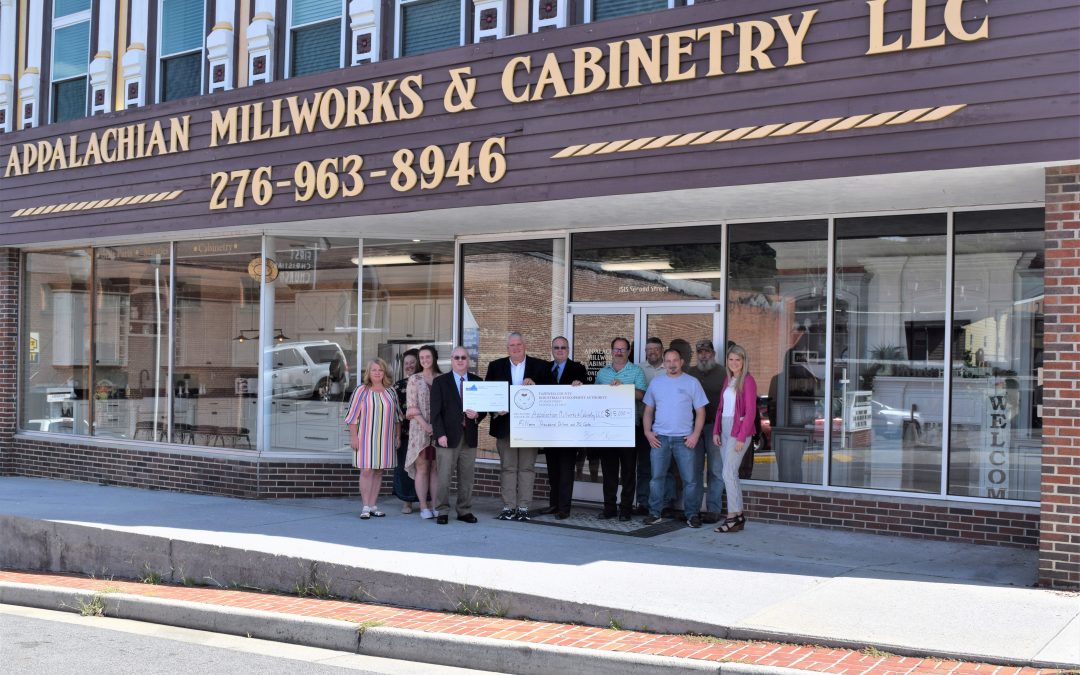 Ceremonial checks representing a $400,000 loan from the Virginia Coalfield Economic Development Authority and $15,000 in incentives from the Tazewell County Industrial Development Authority to assist with the expansion of Appalachian Millworks & Cabinetry into a new building in Richlands were presented Friday. On hand for the presentation, from left, were Jeanine Israel, Kendra Adams, Courtney Joseph, AMC; Jonathan Belcher, VCEDA; Travis Hackworth, AMC owner; Tim Danielson and Kyle Hurt, Tazewell County IDA; Andy Hrovatic, Tazewell County board of supervisors, also a member of the VCEDA board; Kelly Taber and Charlie Lawson, AMC; and Ashley Harris, Tazewell County IDA.

RICHLANDS, VA – AUGUST 5, 2022 – A $400,000 loan to be used to finance building construction, renovations and improvements to streamline its manufacturing and assist with an expansion of Appalachian Millworks & Cabinetry in Tazewell County, bringing with it a net new 15 full-time jobs and $1,050,000 in private investment was closed recently by the Virginia Coalfield Economic Development Authority (VCEDA).

“Assisting existing businesses expand their operations creating additional jobs and investment within VCEDA’s e-Region is an important component of what we do here at VCEDA,” said Jonathan Belcher, VCEDA executive director/general counsel. “Appalachian Millworks & Cabinetry, LLC (AMC) is a Virginia company formed in 2015, and it has already been providing products and jobs in the region. This latest expansion will add to those job numbers by an already established business.”

The company is known for its custom cabinetry, trim, flooring and other millwork.

Upon its formation in 2015, AMC began operations at 1515 Second Street in Richlands in the former W.B.F. White and Sons building, which was formerly used for the operation of a similar business, Clinch Valley Millworks.  Since its inception, AMC noted it has developed long-standing relationships with more than 100 vendors and has sold products to more than 800, according to its application to VCEDA for funding.  Several commercial and residential contractors use AMC’s custom millworks products.

To become more efficient and streamline the manufacturing process, AMC has purchased a new location — the former Magic Mart building and site located at 1809 Third Street in downtown Richlands — for a relocation and expansion which will also involve the purchase of new machinery and tools, allowing the company to have higher volume production, increase sales and add jobs. The building is approximately 49,500 square feet built around 1971 and is situated on a 2.2-acre site.

“The VCEDA loan really helped us,” said Travis Hackworth, AMC owner. “We have put so much private money into this project and we were at the point of where we could wait to finish it out, or in this case, with the help of the VCEDA funds, we are able to stay on track.”

Hackworth said he anticipated the new facility would open in the first quarter of 2023.

As for the existing building, Hackworth said, “we have plans of repurposing the current building we have at a future date, but for now it will remain the offices of Twin Enterprises Inc. and Appalachian Millworks, as well as showroom.”

The VCEDA loan proceeds will be used for upfits to the new building and to streamline manufacturing processes. The Tazewell County Industrial Development Authority also provided incentives for the project including a $2,000 per job grant; and a five-year real and personal property graduated tax rebate on the increase in value of real and personal property taxes for a five-year period.

“The Tazewell County Industrial Development Authority is pleased to support VCEDA and our existing employers with their expansion plans and assist in providing quality job opportunities for Tazewell County residents,” said Tazewell County Economic Development Director Tim Danielson. “The expansion will provide a needed repurposing of a vacant property in the Town of Richlands. We look forward to being a supportive public partner for Appalachian Millworks and Cabinetry. Their current and future growth plans will always be welcome in Tazewell County.”

About Virginia Coalfield Economic Development Authority and Southwest Virginia’s e-Region: The Virginia Coalfield Economic Development Authority, created by the Virginia General Assembly in 1988 to enhance and diversify the region’s economy and help create jobs, markets Southwest Virginia’s e-Region and its focus on electronic information technology, energy, education, emerging technologies, and entrepreneurship. VCEDA is a unique economic development organization that manages funds for economic development projects from a percentage of the coal and natural gas severance taxes paid by coal and natural gas companies that operate in the region. Located in southwestern Virginia, the region includes Buchanan, Dickenson, Lee, Russell, Scott, Tazewell, and Wise counties and the City of Norton. www.vceda.us