VCEDA Closes Loan to AMR PEMCO for Expansion in Bluefield 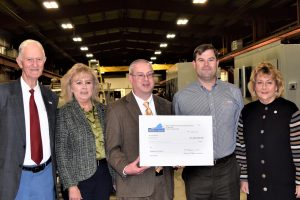 BLUEFIELD, VA – November 15, 2018 — A $1.4 million loan to AMR Pemco in Tazewell County to be used toward a planned expansion at the Bluefield, Va., facility was closed Thursday by the Virginia Coalfield Economic Development Authority (VCEDA).

The company was founded in 1960, and was acquired in November 2016 by American Mine Research, Inc. (AMR) of Rocky Gap, Va.  AMR was founded in 1975 by Robert (Bob) Graf, and in addition to Pemco, has other affiliated companies including East River Metals, Inc. (Bland County, Va.) and Custom Manufacturing Services, Inc. (Princeton, WV).

“We are pleased to assist AMR Pemco in their planned expansion project,” said VCEDA Executive Director/General Counsel Jonathan Belcher.  “VCEDA has a long history of working with the company which has provided good jobs in our region for decades.  This expansion by one of the region’s major manufacturing companies will be a significant boost economically to our area.”

“Through this growth plan, we hope to add 75 jobs in the next several years,” said David Graf, president of AMR Pemco.  “These jobs will be a mixture of engineers, test technicians, welders, electrical assemblers and metal fabrication machine operators.”

A new fiber laser cutting machine, an expansion of the facility’s wash booth and wet paint booth/oven setup and the addition of a new powder paint booth are among the expansions planned at the facility.

“We are diligently diversifying our revenue streams,” Graf said. “We are still in coal, but we are also getting into hard rock mining, natural gas, transit and utility markets.”