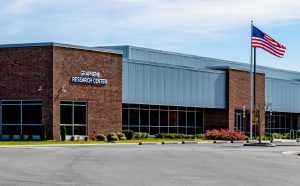 VCEDA closed on an up to $1.5 million loan to the Wise County Industrial Development Authority for the Carbon Research and Development Co. project at the Graphene Research Center at the Lonesome Pine Regional Business and Technology Park in Wise.

The funds from VCEDA will be used to finance equipment and other improvements to support the location of Carbon Research and Development Co. at the Graphene Research Center, a 24,000-square-foot facility

“VCEDA is pleased to approve the loan for this project which fits with our stated goals of seeking to locate advanced manufacturing in Southwest Virginia’s e-Region,” said VCEDA Executive Director/General Counsel Jonathan Belcher. “The new center will be involved not only in the manufacture of commercial-grade graphene, but also in the research of new applications for the product.”

Graphene is described as a “wonder material” of this century, following the Nobel Prize winning announcement of its discovery in 2004. Graphene may be produced from any carbon-based material, but unlike other graphene producers who use graphite as the source feedstock, the process used at the center will convert coal and/or wood chips into graphene. The unusual capabilities of graphene include its tensile strength which is 300 times stronger than steel. It possesses unequalled thermal and electrical conductivity, high heat resistance, is light weight and thin.

“We hope to have everything operational by late spring or early summer,” said Dr. Steve Hooper, CEO, president and founder of Carbon Research and Development Co (CRDC)., which is part of the EnviraCarbon group of companies. “The retrofit of existing equipment is already underway. By the end of the year, we hope to be in full production.”

The graphene will be produced using CRDC’s patent licenses and trade secrets, as well as licensing intellectual property to others for manufacturing of specific products. An intellectual property licensing agreement with Virginia Tech is also being negotiated. Virginia Tech is in the process of doing a study on the market potential for graphene. The study is being funded by the IDA and by a grant through GO Virginia Region One.

Hooper noted graphene can be used to strengthen many products when it is used as an additive to plastics, paint and rubber.

“We hope to produce graphene economically and through the research being done, to find ways to tweak our processes to make an even better product,” Hooper said.

Already, Hooper said two companies have expressed an interest in the product – one, a bourbon distiller interested in the product for its filtration system; and the other, a European glass company looking at its application for glass coatings.

“It is our hope that our project will also serve to enhance the economy in Southwest Virginia,” Hooper said.

A website featuring the project is expected to be live the first week in March and may be found at www.xphene.com.