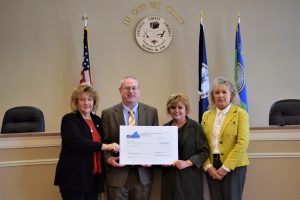 TAZEWELL, VA — February 11, 2019 — An up to a $150,000 loan from the Virginia Coalfield Economic Development Authority (VCEDA) Tourism Capital Improvement Matching Fund was closed Friday for Tazewell Cinema & Entertainment, LLC which will result in the reopening and renovation of the old theater building in North Tazewell.

The business is owned by Sharon McReynolds Thomas and John Thomas, who have plans to turn the old theater building into a full entertainment venue offering movies, theater space for live performances through a partnership with the Barter Theatre, a trampoline park and video arcade. Live streaming capabilities will allow the theater to also stream major sporting events or cultural arts events. Additionally, the theater will seek to partner with local colleges, dance studios, CART (Citizens for the Arts), and other local performers to host various other cultural events.

“VCEDA is pleased to be a part of the project which will provide jobs while at the same time creating a tourism entertainment venue in Tazewell which will also benefit local residents,” said VCEDA Executive Director/General Counsel Jonathan Belcher. “The project has value for not only tourism creation, but also for its local economic growth potential.”

“We are really excited about this project,” said Sharon Thomas. “When we looked at the Tazewell Cinema property, we had a thousand different ideas run through our minds about what we might do. VCEDA has helped those ideas to become reality.”

Funds from the VCEDA loan will be utilized to purchase projectors, screens and a sound system as well as computers, Thomas said. Funds from the Cumberland Plateau Planning District and funds the Thomas’ plan to put into the project will be used to renovate the existing cinema space.

High quality reclining seats are planned for those cinemas.

In what is now the third theater space, Thomas said, renovations will turn it into a mini-trampoline park and arcade game location. A balcony overlooks the space and will serve as a party room which can be reserved for birthday parties or other event celebrations.

The original part of the theater building was constructed in 1970 and an addition was added at a later date.  It operated as a movie theater until closing its doors in 2012.

“We are excited to bring this project to life in Tazewell,” Thomas said. “We think it will be a good addition to the community and that it will help to stimulate tourism growth in the area by providing another entertainment venue in the region.”